A brief story about Albert Finney, oral sex, Jack J. Valenti, and me 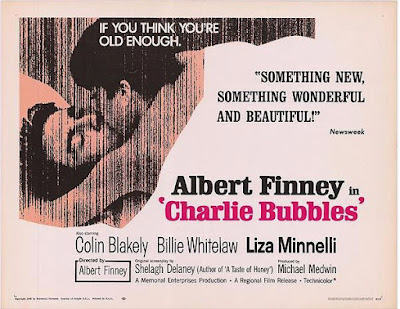 In Charlie Bubbles (1968), the only movie the late, great Albert Finney ever directed, Finney affectingly plays an author who, for a goodly portion of the film, is on a road trip with his adoring secretary, played by a very young, pre-Sterile Cuckoo Liza Minnelli. (She’s pretty terrific, by the way.) There is a scene where it’s fairly clear, though not explicitly depicted, that because he’s too enfeebled by ennui or just plain exhausted, she scoots down between his legs in a hotel room bed to fellate him. That’s one of the reasons why Universal had to release Charlie Bubbles through a subsidiary distributor — the studio couldn't get a production code seal for it.
Something similar happened the same year with Michael Winner's I'll Never Forget What's'isname, a movie that has a scene in which it’s heavily implied that Oliver Reed performs cunnilingus on Carol White. The minor controversies sparked by both films are amusingly detailed in Jack Vizzard's 1971 memoir See No Evil: Life Inside a Hollywood Censor —  a book, not incidentally, that I cited as a reference in the long-delayed master’s thesis I wrote more than a decade ago for my MA degree at the University of Houston.


Oddly enough, both Charlie Bubbles and I’ll Never Forget What’s’isname played for months on a double bill at the Gentilly-Orleans, an art house in my hometown of New Orleans, during my senior year of high school. And I viewed the double bill multiple times — not because of the risqué scenes (though, I must admit, they weren't exactly a deterrent) — but because, for reasons I still don't fully understand, I felt extremely simpatico with the alienated characters played by Finney and Reed. (Yeah, I was a strange kid.)


What I had no way of knowing at the time is that both films provided early headaches for Jack J. Valenti, who took over as head of the MPAA in 1966 — and wound up replacing the Production Code with the vastly more flexible MPAA Ratings System in November 1968.


Now I teach at the Jack J. Valenti School of Communication at University of Houston. And the world keeps spinning in its greased grooves.
Posted by Joe Leydon at 2/08/2019 11:43:00 PM