First Look: The Last Out Follows Cuban Hopefuls on Trail to MLB Glory 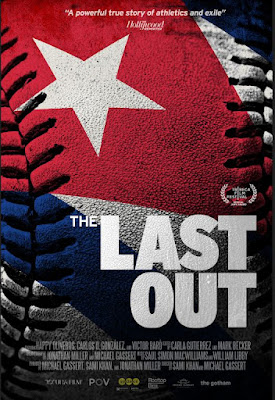 Talk about savvy timing: On the day of Major League Baseball’s All-Star Game, filmmakers Sami Khan and Michael Gassert have released the poster and trailer for their award-winning documentary The Last Out, an up-close look at three Cuban hopefuls who dream of taking part in The Great American Pastime.

Specifically, the film, set to open theatrically on Aug. 19, focuses on Happy Oliveros, Carlos O. González, and Victor Baró — as well Gus Dominguez, the Cuban-American recruiter who, in the words of Moneyball author Michael Lewis,  “invented the market for Cuban baseball players.”

According to the press release announcement: “Set amidst the dark side of professional sports and the migrant trail, The Last Out tells the inspiring story of Oliveros, González, and Baró, three Cuban baseball players who risk exile to train in Central America with Dominguez as they chase their dreams of playing in the Major Leagues… Filmed over more than four years, The Last Out focuses on people caught between countries who want nothing more than to make a better life for their families.”

In the interest of full disclosure: Houston's Minute Maid Park looms large in the trailer. So, to paraphrase Leonardo DiCaprio in Django Unchained, the press release aroused my curiosity — but this trailer grabbed my attention.