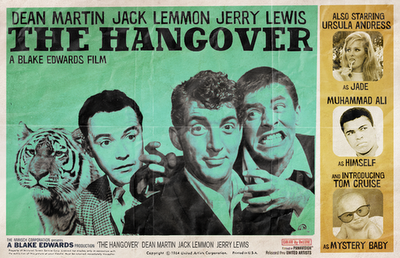 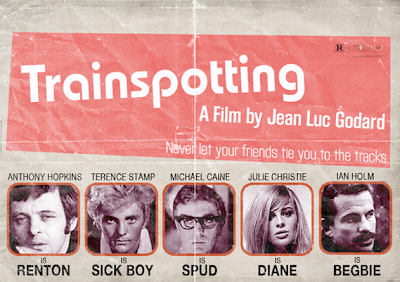 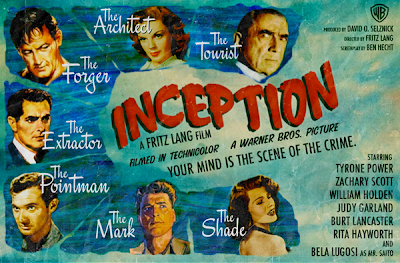 In another place, in another time... maybe these movies would have been made. (Hat-tip to John Guidry for discovering these wonderments.)
Posted by Joe Leydon at 1/31/2012 08:57:00 PM 1 comment:

Email ThisBlogThis!Share to TwitterShare to FacebookShare to Pinterest
Labels: "The Hangover", Inception, Trainspotting 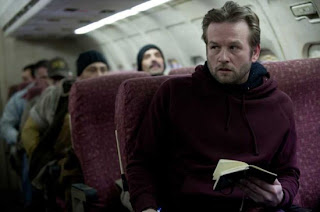 OK, Dallas Roberts, spill the beans: Just how damn cold was it while you were shooting The Grey?

"It was all the way cold," the Houston-born actor told me a few days ago. "To the end of cold. That’s how cold it was. Negative-40 degrees, 60-miles-an-hour winds. Cold."

Email ThisBlogThis!Share to TwitterShare to FacebookShare to Pinterest
Labels: "The Grey", Dallas Roberts

Don't get me wrong: I love Shirley MacLaine. And she kinda-sorta likes me. But I still think Maggie Smith can make her tap out with a figure-four leglock.
Posted by Joe Leydon at 1/30/2012 04:40:00 PM 3 comments: 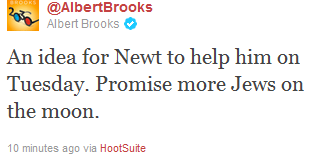 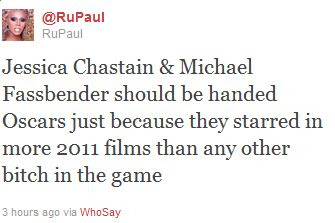 Oscar Watch II: Many are advertised, but few are chosen

My CultureMap commentary on the Oscar nominations announced this morning (along with my early handicapping of the major races) can be found here.
Posted by Joe Leydon at 1/24/2012 01:15:00 PM No comments:

Oscar Watch: Ascent of The Descendants

Congratulations to Alexander Payne for nabbing multiple Academy Award nominations for The Descendants, one of the very best films of 2011. You can read my recent MovieMaker Magazine interview with the acclaimed director here.
Posted by Joe Leydon at 1/24/2012 12:59:00 PM No comments:

On the radio: Me 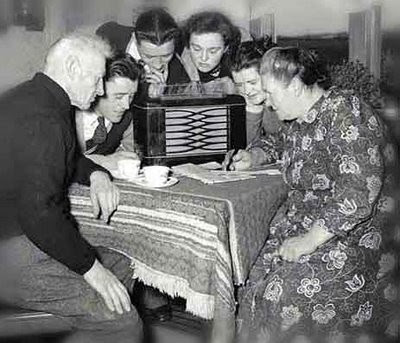 I'll be on the air tomorrow morning with the good folks at News 92FM here in H-Town to talk about... well, what do you think, tonight's Florida GOP debate? No, we'll be chatting about the Academy Award nominations, which will be announced around 7:30 am. Listen for me somewhere between 8:30 and 8:40 am Tuesday. And then make sure you contact the station and tell them how wonderful you thought I was. Remember: You must listen. Resistance is futile.
Posted by Joe Leydon at 1/23/2012 12:10:00 PM No comments: 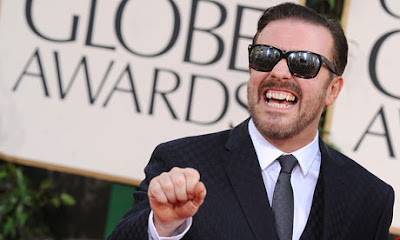 When Mitt Romney Came to Town


Josh Marshall of Talking Points Memo reports that supporters of Newt Gingrich hope to swift-boat Mitt Romney before the upcoming South Carolina GOP primary by releasing a documentary that, judging from this trailer, appears to be a hatchet job concocted by someone to the left of Michael Moore. Not that there's anything wrong with that, you understand. It's just that I never thought I'd live long enough to see conservative Republicans attack another conservative Republican by condemning the latter for... for... well, making too much money.
Posted by Joe Leydon at 1/09/2012 07:55:00 AM No comments:

Next for George Clooney: A tale of real-life heroes

Fresh from his critical and commercial success with The Ides of March -- which will be released on homevideo Jan. 17 -- George Clooney has announced his next project as a multihyphenate: An adaptation of the nonfiction book The Monuments Men: Allied Heroes, Nazi Thieves, and the Greatest Treasure Hunt in History by author Robert M. Edsel. The movie will be a true-life, post-WWII adventure drama about a special unit of U.S. Army specialists charged with locating and recovering art seized by the Nazis. And if that sounds just a tad familiar, well, maybe you saw (or at least read my review about) this fascinating documentary four years ago: The Rape of Europa.

Email ThisBlogThis!Share to TwitterShare to FacebookShare to Pinterest
Labels: George Clooney, The Rape of Europa


I'm kinda-sorta looking forward to seeing The Grey -- i.e., Liam Neeson Tangles with Wolves -- which opens Jan. 27 at theaters and drive-ins everywhere. But after seeing this television spot for the last several weeks, I almost feel like I've already been force-fed a stealth ad campaign for the movie.
Posted by Joe Leydon at 1/02/2012 07:21:00 PM 2 comments:

Email ThisBlogThis!Share to TwitterShare to FacebookShare to Pinterest
Labels: "The Grey", Liam Neeson

To begin, as I do every year, with my standard disclaimer: This may be my list of the Top 10 Movies of 2011 – but it’s not necessary a rundown of the year’s 10 Best Movies. Because, quite frankly, I haven’t seen every single movie released in the US during the past 12 months. But it most certainly is a list of my favorite films to open in U.S. theaters in 2011.

(To be sure, at least one didn't open in Houston – but that is H-Town's loss.)

These are, of course, purely arbitrary and totally subjective choices. And I’ll freely admit that, a decade or so hence, I might look back on the following lineup and want to make additions or deletions. At this point in time, however, I can honestly state these are the 2011 releases that impressed me most. And best. So there.

Hugo. Martin Scorsese’s awesomely fantastical and fervently heartfelt fable of resilience and renewal is an exhilaratingly loving ode to the magic and immortality of cinema, a stirringly exciting adventure with a delightfully Dickensian flavor, and a powerfully eloquent expression of human longing for a sense of purpose. Not incidentally, it’s also the very best 3D movie ever made. And I must admit: I never thought the sight of a mechanical man drawing a picture ever would get me teary-eyed. But… Well, if you passionately love film and you see this particular film, you’ll understand.

The Descendants. George Clooney gives the finest, strongest performance of his career – so far – in this richly amusing and deeply affecting dramedy by filmmaker Alexander Payne (Sideways, About Schmidt). You could say Clooney’s character – Matt King, a Honolulu lawyer whose life undergoes dramatic changes as his wife hovers near death – is a typical Payne protagonist, a normally risk-averse fellow who gets shaken out of his routine, and shocked out of his expectations. But Clooney makes that character uniquely, memorably and well-nigh perfectly his own.

Daydream Nation. Charged with alternating currents of teen angst, sardonic wit, nervous dread and impudent sensuality, Canadian filmmaker Mike Goldbach’s dazzlingly inventive comedy suggests Juno as reimagined by David Lynch – or a sunnier, funnier Donnie Darko – as it renders the misadventures of its sarcastic, sexually precocious 17-year-old heroine (a breakthrough performance for Kat Dennings) who remains whip-smart and wickedly droll while confronting the peculiarities of life in the weirdest small town this side of Twin Peaks. (This Canadian import received criminally sparse U.S. theatrical release – but it’s well worth catching on cable or home video. And, yes, those are quotes from my original Variety review on the DVD package.)

Young Adult. Charlize Theron’s brilliant performance as a spectacularly self-indulgent thirtysomething author who behaves not just badly but borderline madly while revisiting her hometown is nothing short of jaw-droppingly fearless. And so is the sharply insightful and often discomfortingly comical movie – created by the Juno team of director Jason Reitman and scriptwriter Diablo Cody – that showcases Theron’s Oscar-worthy star turn.

Margin Call. Armed with his own savagely smart and profanely witty script and an impeccable ensemble of perfectly cast actors, first-time feature director J.C. Chandor takes dead aim at the Wall Street wheeler-dealers who – while swept up in a perfect storm of unchecked greed, wanton hubris and self-absorbed panic – triggered the financial meltdown of 2008. The movie is some kind of David-Mametesque  masterwork, suspenseful and sardonic in equal measure, but be forewarned: If you play a drinking game that calls for taking a shot each time some anxious character reacts to bad news by gasping “Fuck me!” – you’ll likely be passed out on the floor by the midway point.

50/50. And now for something completely different, a comedy about cancer. No, make that: An extraordinarily funny and exceptionally humane comedy about cancer, inspired by the real-life experiences of scriptwriter Will Reiser. Joseph Gordon-Levitt compellingly ricochets between emotional extremes as a Seattle radio producer who relies (sometimes begrudgingly) on emotional support from a raucously uninhibited buddy (Seth Rogen) and a sincere neophyte therapist (Anna Kendrick) while fighting the good fight against a dread disease.

The Ides of March. George Clooney does his finest work as a film director – so far – in this acerbically crafty and meticulously crafted drama about power plays, double crosses, inconvenient tragedies and brutal disillusionments behind the scenes of a Presidential campaign. Major props go to Ryan Gosling, who so adroitly conveys profoundly mixed emotions as a campaign tactician that even during the final second of the last scene, you’re not entirely certain just what he’ll do next.

Midnight in Paris. Woody Allen’s immensely likable and immoderately clever comedy has Owen Wilson hitting all the right notes (at precisely the right moments) as the sort of character Allen himself used to play in his films, a romantic who’s deeply mistrustful of intellectuals, but equally skeptical of those who don’t know (or care) about the artists and artistry he admires. While on vacation in Paris with his materialistic fiancée (played rather too convincingly as a hectoring nag by Rachel McAdams), Wilson’s Gil, a successful screenwriter determined to write his first novel, is magically transported back to the 1920s and allowed to hang out with such luminaries as Gertrude Stein, Ernest Hemingway and Pablo Picasso. It’s a great place to visit – but perhaps, Gil reluctantly realizes, not the best place to live.

Win Win. Written and directed with subtlety and skill by Tom McCarthy (The Station Agent), this warm-hearted yet clear-eyed comedy surprises and delights while focused on a financially stressed lawyer and part-time high school wrestling coach (Paul Giamatti at his finest) who does the right thing for the wrong reasons when he becomes the surrogate father for a client’s teen-age grandson (Alex Schaffer, arguably the most promising newcomer of 2011).

Moneyball. To be entirely honest, I don’t know nearly enough about the inner workings of The National Pastime to judge whether every minor detail in the storyline – the literally “inside baseball” stuff – is altogether accurate. But I can spot a great movie about dogged persistence and seriocomic obsession when I scout one, and I can tell when a major star (Brad Pitt, take a bow) gives a performance that marks him as a Hall of Fame player, so Moneyball scores a spot in my Top Ten lineup.