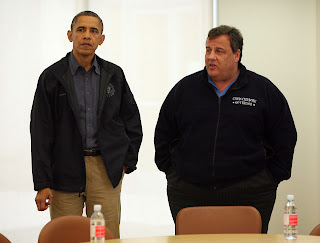 Better late than never, here's a segment devoted to Halloween-appropriate movies, with me and Deborah Duncan, that ran last Wednesday on Great Day Houston.
Posted by Joe Leydon at 10/30/2012 12:47:00 AM 1 comment:

The lovely and talented Lena Dunham made me laugh out loud with this video in support of President Barack Obama. At least, I laughed until, for the second time in less than a week, I was reminded that I cast my first vote in a Presidential election all the way back in 1972, for George McGovern. God, I feel old. As Vincent Price once said after he realized that, out of all the people in an old movie he was watching on TV, he was the only one still alive: "I put down the drink -- and picked up the bottle."
Posted by Joe Leydon at 10/26/2012 12:10:00 AM 1 comment: 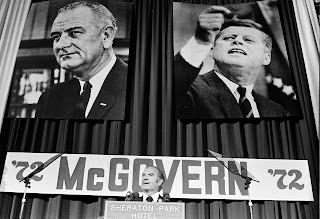 Two things that immediately popped into my head when I heard the sad news this morning about George McGovern's death.

First, he was the first Presidential candidate I ever voted for -- at a time when this country seemed even more divided and yet, strangely enough, at the same time, somewhat more civil than it is now.

Second: It has been impossible for me to read or hear McGovern's name ever since seeing All the President's Men without thinking of Hal Holbrook in that dimly lit parking garage telling Robert Redford, in the condescending tone of someone explaining the obvious to a none-too-bright child, that McGovern was the liberal Democrat that Richard Nixon and his flunkies wanted to run against in 1972, because he'd be so much easier to beat than Ed Muskie.

I have never ceased to agree with those who've praised George McGovern as a good and honorable man. But I still shudder when I consider how easily and ruthlessly he, and we, were manipulated by his opponent.
Posted by Joe Leydon at 10/21/2012 01:46:00 PM 5 comments: 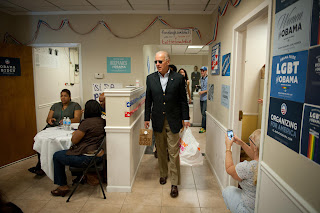 As H.L. Mencken once sagely noted: "Nobody ever went broke underestimating the intelligence of the American public." Wonder what the old boy would make of Amazon.com's announced intention to get into the movie production business with "crowdsourced" projects like... like... well, Zombies Versus Gladiators.
Posted by Joe Leydon at 10/10/2012 02:31:00 PM No comments:

Latest reason I love being a teacher 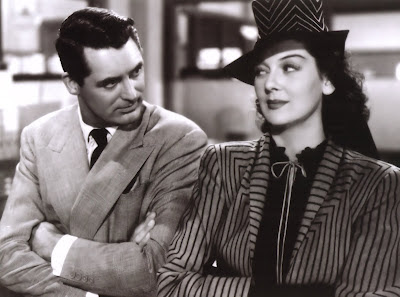 Tonight, I had a student thank me -- actually thank me -- for screening His Girl Friday during a History of Film class at Houston Community College. But wait, there's more: He also said that he wanted to someday, somehow, make a movie as smartly written as this one. I told him: Good luck. I look forward to reviewing it.
Posted by Joe Leydon at 10/09/2012 12:00:00 AM 5 comments: 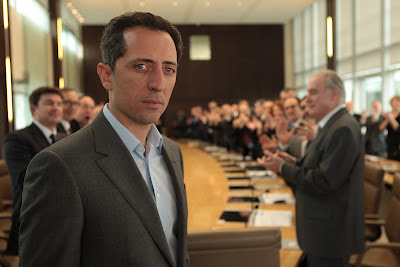 I suspected -- and admitted I suspected -- I would like Costa-Gavras' Capital before I actually saw it last month at the Toronto Film Festival. And sure enough, the film turned out to be a slick and sensationally entertaining melodrama. Unfortunately, I got sidetracked while gathering production info -- i.e., the cast and crew credits I need to list for a Variety review -- and then something came up, followed by something else. So I didn't get around to giving the movie its due props. Until now.
Posted by Joe Leydon at 10/08/2012 06:44:00 PM 1 comment:

Email ThisBlogThis!Share to TwitterShare to FacebookShare to Pinterest
Labels: Costa-Gavras

As the owner of three cats, I find this mildly amusing parody absolutely irresistible. But I must admit: The uncensored version is a lot funnier.
Posted by Joe Leydon at 10/08/2012 02:01:00 PM 1 comment:


Every great once in a while, I am reminded that, contrary to what we might sometimes think, not every great movie is available in the U.S. on DVD. Case in point: Claude Lelouch's Les Miserables (1995), one of my favorite films of all time. As I wrote years ago:

"Claude Lelouch's audacious and exciting epic is neither a film version of the long-running musical nor a traditional adaptation of Victor Hugo's classic novel. Rather, it is a sweeping and sensationally passionate drama that succeeds brilliantly on its own merits as a celebration of storytelling (and, of course, moviemaking) as inspiration and illumination. A magnificently ravaged Jean-Paul Belmondo plays Henri Fortin, an ordinary man whose life spans an extraordinary period in French history: Born at the turn of the century, he lives long enough to endure the cruelties of the Nazi occupation. Rootless and illiterate, he is introduced to Les Miserables at an early age -- in a silent movie! -- and embraces Jean Valjean as his hero, mentor and alter ego. So much so, in fact, that Henri agrees to help a Jewish family escape from Paris, setting into motion a fateful series of betrayals, reconciliations, reversals of fortune and triumphs of the spirit. There are images in Les Miserables that are as hauntingly beautiful as any in the history of cinema. And there are entire sequences that are nothing short of astonishing. Lelouch is one of the few contemporary filmmakers who remains capable of the grand romantic gestures that made many of us fall in love with movies in the first place."

If anyone at Warner Home Video reads this, take it as a plea: The upcoming film version of the stage musical is bound to be a great big hit, so why not give us a DVD/Blu-Ray of Lelouch's masterwork? Think of it this way: You'll be able to hitch a ride on the gravy train, and sell a whole bunch of units.
Posted by Joe Leydon at 10/07/2012 12:16:00 AM 14 comments:

This just in: Barack Obama is a colored person

A Twitter friend posted this with the message: "This is what Republicans see every time the President speaks in front of black folks." You know, I think he may be on to something.
Posted by Joe Leydon at 10/02/2012 05:56:00 PM 1 comment: