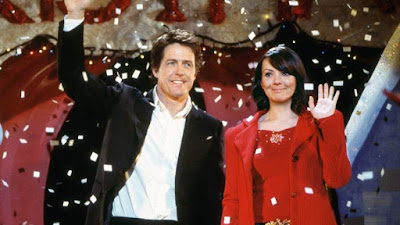 This is the time of the year when some bizarre form of snarky group-think manifests itself, and a lot of people start trash Tweeting about Love, Actually. So I feel compelled to reprint my original 2003 review of the film — which, actually, I quite liked.


Richard Curtis, the screenwriter of Notting Hill and Four Weddings and Funeral, graduates to multi-hyphenate status with Love, Actually, and it's altogether appropriate to grant him a passing grade for his directorial debut. An affectingly seriocomic crazy-quilt of overlapping love stories in and around London, Curtis’ hugely enjoyable comedy-drama strikes a delicate balance between silliness and seriousness, sentiment and sardonic wit, even as it warns that not every love story ends happily ever after.


It’s a given, of course, that if we're dealing with a scenario contrived by Curtis, Hugh Grant must figure into the mix. Sure enough, the nimbly self-effacing farceur is first among equals in the ensemble cast, gracefully playing a newly elected, vaguely Tony Blair-ish prime minister who's conveniently unattached as he moves into No. 10 Downing Street. He's scarcely through the front door before he's distracted by Natalie (Martine McCutcheon), a chipper household staffer who's all the more delectable for not being supermodel-svelte.


Truth to tell, there's a bit of meat on her bones. And while she wears it well, she’s more than a little self-conscious, thanks to a churlish ex-boyfriend who made pointed reference to “thighs the size of tree trunks” before his departure.


The PM, savoring the pleasure of her company, graciously offers to punish the bounder: “You know, being prime minister, I could just have him killed.” (Not for the first time in his career, Grant seizes upon a mildly amusing line and, with perfect-pitch timing, makes it sound flat-out hilarious.) Natalie – flashing just a hint of a smile – responds: “Thank you, sir. I'll think about it.”


Elsewhere amid the entangled plotlines, other romance-in-the-workplace stories proceed apace. Harry (Alan Rickman) is happily married to Karen (Emma Thompson) – who just happens to be the sister of the newly elected Prime Minister – but he can't help responding to the none-too-subtle blandishments of Mia (Heike Makatsch), his aggressively adoring secretary. Jamie (Colin Firth), a jilted thriller writer, flees his unfaithful girlfriend to complete a novel at his villa in the south of France, where, when he's not plotting some character's untimely demise, he falls in love – slowly, sweetly -- with Aurelia (Lucia Moniz), his Portuguese housekeeper. That she can't speak much English, and he can't speak any Portuguese, is at worst a minor impediment to the blossoming romance.


Not all storylines are created equal. The ironically shy and formal interplay between two body doubles (Martin Freeman, Joanna Page) for stars in a sexy melodrama never amounts to anything more than a lame running gag. Laura Linney is pleasingly plucky as a transplanted American who pines for a hunky office co-worker, but she's undone by a plot device – i.e., a choking family tie – that's introduced far too late in the proceedings. A romantic triangle involving Keira Knightley, Chiwetel Ejiofer and Andrew Lincoln is uncomfortably closer to a stalker story. And while Liam Neeson hits all the right emotional notes as a recently widowed stepfather who offers romantic advice to his lovestruck 11-year-old stepson (Thomas Sangster), neither he nor Sangster can do enough to encourage a rooting interest in either of their characters.


On the other hand, Kris Marshall is uproarious as an unlucky-in-love doofus who suspects (or, more precisely, hopes) that his Brit accent will be catnip to the ladies in the nether realms of Wisconsin. (“I am Colin, God of Sex. I'm just on the wrong continent, that's all.”) And Bill Nighy (Still Crazy) is tremendously funny as he more or less unites the disparate elements of Love, Actually as Billy Mack, a burnt-out rock star who shamelessly attempts to re-ignite his stardom by doing a sappily Christmas-themed version of a golden oldie.
Posted by Joe Leydon at 11/25/2018 01:59:00 PM No comments: 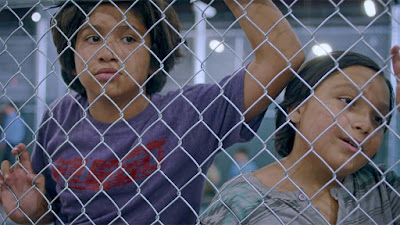 From my 9.13.18 Variety review: “It’s difficult for a film to feel timelier than Icebox, writer-director Daniel Sawka’s precisely detailed and arrestingly spare drama about a 12-year-old Honduran boy whose desperate flight from gang violence in his homeland leads to his arrest near the U.S.-Mexican border, and subsequent incarceration in one of the several chain-link-fence cages at an immigrant detention facility…

“Anthony Gonzalez, who recently voiced the lead character in the animated feature Coco, rises to the challenge of being on-screen almost every minute as Oscar, the young protagonist forced to more or less fly solo while maneuvering through the daunting gauntlet of the immigration system. Evincing an unforced naturalism that recalls Jean-Pierre Léaud as Antoine Doinel in The 400 Blows, he provides a compelling point of view for a hard-knock coming-of-age story that traces an arduous journey from desperation to resignation.”

Icebox — which I reviewed at the Toronto Film Festival — will debut Dec. 7 on HBO. You can read the rest of my review here. 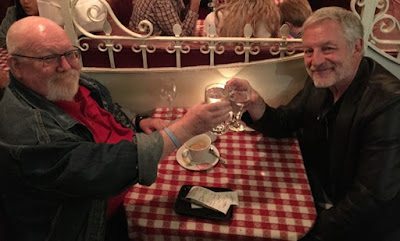 Veteran actor Perry King likes to joke that, after decades of work in film, theater and television, he’s achieved just enough fame to be a familiar face — but perhaps not quite a household name.

Don’t misunderstand: King is merely offering an observation, not issuing a complaint. At the ripe young age of 70, he can look back at a career abounding with enviable highlights: Co-starring opposite fellow up-and-comers Sylvester Stallone and Henry Winkler in The Lords of Flatbush (1974); playing major roles in movies as diverse as Mandingo (1975), A Different Story (1978), Switch (1991) and The Day After Tomorrow (2004); impressively portraying the attention-grabbing role of  Col. Nathan R. Jessep during the original Broadway run of A Few Good Men; and appearing in well-regarded TV series and miniseries like Captains and Kings (1976), Aspen (1977), The Last Convertible (1979), The Hasty Heart (the 1983 drama for which he received a Golden Globe nomination); Riptide (1984-86), Melrose Place (1995), and Big Love (2010).

But here’s the thing: King isn’t looking back. Rather, he’s looking forward. In The Divide, his debut effort as a feature film director, he gives what arguably is his all-time best screen performance as Sam Kincaid, a Northern California rancher who, during the drought of 1976, struggles to remember what is important — and transcend what he cannot forget — as he is gradually diminished by Alzheimer’s Disease.

On the other side of the camera, King the director (working in concert with screenwriter Jana Brown) has fashioned an uncommonly compelling and emotionally rich drama, and surrounded King the actor with a sterling supporting cast: Bryan Kaplan as Luke Higgins, Kincaid’s hired hand, a man yearning for his own shot at redemption; Sara Arrington (of Amazon Prime’s Bosch) as Sarah, Kincaid’s estranged daughter, who’s reluctant to admit her feelings toward Sam or Luke; Luke Colembero as C.J., Sarah’s son, who desperately needs a grandfather and a father figure; and Levi Kreis (who earned a 2010 Tony Award for playing Jerry Lee Lewis in the original Broadway production of Million Dollar Quartet) as Tom Cutler, a deceptively charismatic fellow with a score to settle with Sam.

Last spring, while wearing my hat as senior writer for Cowboys & Indians magazine, I had the opportunity to talk with King about The Divide — which kicks off its theatrical run Friday in Los Angeles — after the film's premiere at WorldFest/Houston. We chatted again a few weeks later in L.A. at the storied Dan Tana's Restaurant in L.A. (where the above photo was taken). And before you ask: No, actually, I picked up the tab, which I always try to do when I dine with a talented indie filmmaker.

You can read my Cowboys & Indians interview with Perry King here. And here is a trailer for The Divide.