My titillating encounter with the great Debbie Reynolds 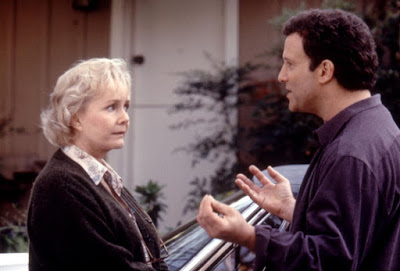 In November 1996, while I was free-lancing for NBC affiliate KRRC-TV, I drove to Austin to cover the junket for Albert Brooks’ Mother – and had a brief one-on-one sit-down with Debbie Reynolds.

Funnily enough, I had asked her a question during a press conference for the very same movie a few weeks earlier at the Toronto Film Festival: “How would you compare working for Albert Brooks to working for Oliver Stone?” (Afterwards, I had to remind more than a few of my quizzical colleagues that she had played a supporting role in Stone’s Heaven & Earth.) And she was very gracious while saying nice things about both gentlemen.

But in Austin, she displayed — well, a delightfully bawdier side of her character.

As I walked into the hotel suite where the videotaping would take place, Reynolds was talking with the production crew about her… her… well, OK, her breasts. Specifically: She was discussing how she had maintained her figure despite the passing of years — she was 64 at the time, the same age I am now — and the laws of gravity. And she wanted everyone within earshot to know: “I’m very proud of my tits.” When she realized a newcomer had entered the interview zone, she turned her gaze to me, and bluntly asked: “Don’t you think I still have great tits?”

For a second, I thought: “Just how does one respond to a question like that?”

And then I figured, what the hell, say what you think.

So I answered: “They look terrific, ma’am. And your ass looks pretty good, too.”

She laughed, but demurred. “Oh, no, that’s gone to hell. But my tits…” 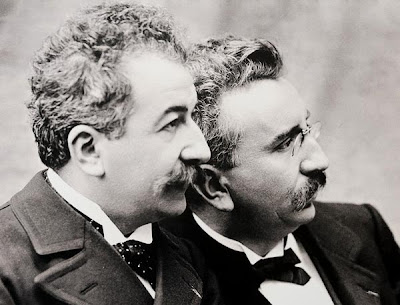 On December 28, 1895, cinema in projected form was presented for the first time to a paying audience by two French brothers, Auguste and Louis Lumiere (pictured above), owners of a photographic studio in Lyons. They went to Paris to demonstrate their cinématographe -- the name they'd given their combination camera and projector -- by showcasing short films they had shot with their hand-cranked innovation.

According to legend: At the Grand Café at 14 Boulevard des Capucines, a man stood outside the building all day on December 28, handing out programs to passers-by. But cold weather kept many people from stopping. As a result, only 33 tickets were sold for the first show.

When the lights went down that evening in a makeshift theater in the basement of the Grand Café, a white screen was lit up with a photographic projection showing the doors of the Lumiere factory in Lyon. Without warning, the factory doors were flung open, releasing a stream of workers... and, wonder of wonders, everything moved. The audience was stunned.

) and The Sprinkler Sprinkled (arguably the first slapstick comedy, involving a man, his garden hose and a practical joker).

Within a week, with no advertising but word of mouth, more than 2,000 spectators visited the Grand Café each day, each paying the admission price of one franc. The crowds were so huge, police had to be called in to maintain order. The age of cinema had begun. Vive le cinema.
Posted by Joe Leydon at 12/28/2016 12:04:00 AM No comments:

Coming soon to a theater or scratching post near you: Kedi 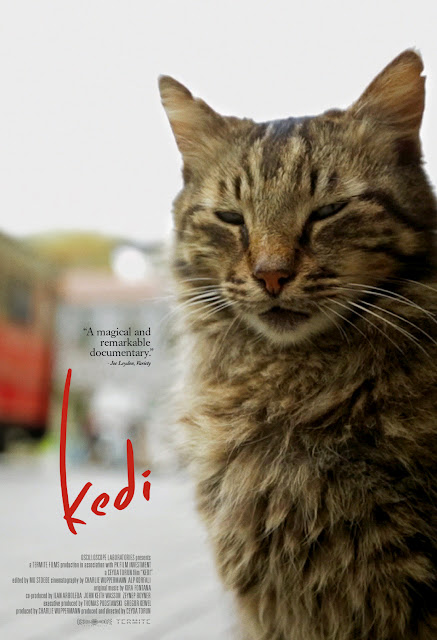 As I wrote in my Variety review just a few months ago, after the film played at the Museum of Fine Arts, Houston:

"Early in Kedi, Ceyda Torun’s splendidly graceful and quietly magical documentary about the multifaceted feline population of Istanbul, a human inhabitant of the city notes: 'Dogs think people are God, but cats don’t. Cats know that people act as middlemen to God’s will. They’re not ungrateful. They just know better.' All of which might explain why so many of the movie’s four-legged subjects come across not as feral orphans who rely on the kindness of strangers, but rather as slumming royals who occasionally deign to interact with two-legged acolytes.

"Indeed, another interviewee here swears that, after his fishing boat was damaged during a storm, a beneficent cat led him to a lost wallet containing just enough money to pay for repairs. 'Whoever doesn’t believe this story,' the grateful beneficiary proclaims, 'is a heathen in my book.'

"Trust me: Kedi will make you a believer."

Thanks to Oscilloscope Laboratories, which proudly bills itself as the distributor "of the best in American independent, foreign, documentary, and cat films," Kedi is slated to start prowling in North American theaters February 10. Here is the trailer.

‘Twas the weekend of Christmas, and all through the land, Godzilla was stirring and stomping and grand.

Yes, friends, it’s that time of year again: Time for The Original Gangsta Lizard to loom large and take charge during the annual Kaiju Christmas movie marathon on the El Rey cable network. Mothra, Rodan, Ghidorah and other notorious notables also figure into the binge-worthy cavalcade of creature features, which kicks off at 6 am ET/PT December 23 with the original 1954 Gorjira, and knocks off at 4:30 am ET/PT December 27 with the classic Godzilla Raids Again (a.k.a. Gigantis The Fire Monster).

Big G — newly reanimated just a few months ago in Shin Godzilla — is the star of almost every movie in the El Rey lineup (Rodan is the sole exception), and the marathon as a whole serves as a testament to the wide range of his iterations. As I noted in my 2014 tribute:

“Much like Madonna, Matthew McConaughey and Miley Cyrus, Godzilla illustrates a time-honored showbiz dictum: The best way to sustain your superstardom is to repeatedly reinvent yourself.

“During six decades of Japanese-produced low-tech monster mashes and made-in-America CGI-stuffed spectacles, Big G has remained au courant through the miracle of image makeovers. From nuclear-age nightmare to doting single parent, from freelance global defender to butt-kicking tag-team wrestler, he has evolved and developed, evincing a versatility that might make Meryl Streep turn green – or, perhaps more appropriately, charcoal gray – with envy.”

You can marvel at the many faces of Godzilla as you peruse titles in the Kaiju Christmas schedule here. And you can prepare for the marathon by viewing this preview.