The great Johnny Cash would have turned 85 today had the Grim Reaper not intervened. But never mind: He remains immortal anyway.

To celebrate his birthday, I am looking back at two extraordinary music videos featuring The Man in Black. The first, completed after Cash’s passing, is for “God’s Gonna Cut You Down.” It was the brainchild of Justin Timberlake, but directed by Tony Kaye, who was on hand to introduce it when I first saw the video at the 2007 Nashville Film Festival. (I have a fond memory of helping him fold up a recalcitrant baby carriage for his young daughter after the screening.) Look closely, and you’ll see celebs ranging from Woody Harrelson to Dennis Hopper to Chris Rock to Keith Richards paying tribute to the gone-but-not-forgotten superstar.


The second — my all-time favorite music video of any sort — is director Mark Romanek’s emotionally wrenching video for “Hurt,” the Nine Inch Nails song that Cash claimed as his own when he covered it for his 2002 album American IV: The Man Comes Around. I first saw it late one night years ago while net surfing in my home office, and I’m not ashamed to admit that I wept so hard and noisily when it concluded that I woke my wife, who rose from bed to check whether I was having some sort of health issue. More recently, I saw it for the umpteenth time last week during my second visit to The Johnny Cash Museum in Nashville. (Spoiler alert: It's the last exhibit you see before the exit door.) I was able to keep from crying that time, but just barely.

As Bono notes in this “Making Of” mini-documentary: "Trent Reznor was born to write that song. But Johnny Cash was born to sing it. And Mark Romanek was born to film it." True dat. 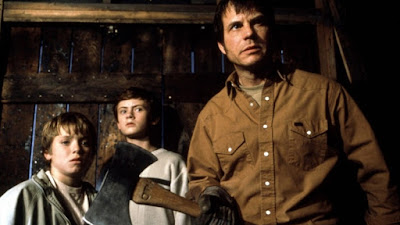 To pay my respects to the late, great Bill Paxton, who passed away Saturday at the ridiculously young age of 61, I am reprinting here my original 2002 review of his feature film directorial debut, the criminally under-rated Frailty.

You might not immediately recall his name, but you almost certainly would recognize Bill Paxton for his solid and unassuming performances in Apollo 13, Titanic, A Simple Plan and Twister. Chances are good, however, that Paxton will become far better known as a filmmaker if enough people see Frailty, a directorial debut that is not merely promising but highly accomplished.

Evidencing the same uncomplicated, matter-of-fact naturalism that informs his best work on the other side of the camera, Paxton tells a complex and compelling story in frills-free, straightforward style that only serves to intensify the movie’s steadily escalating suspense and clammy sense of impending doom. And he’s smart enough to cast a first-rate actor – himself – in a demanding role that calls for a delicate balance of homespun charisma and soft-spoken insanity.

Frailty is, at heart, a horror movie, but almost all of the violence occurs off camera, and the chief bogeyman is all too human and, at times, almost perversely plausible and sympathetic. To its considerable credit, the film gets more mileage from the power of suggestion than any thriller since The Blair Witch Project. Better still, the camerawork is a lot less vertigo-inducing here.

So go see it, and have a great time. I’ll just sign off now and….

Oh. You want to know more, do you? Well, I was afraid of that.

You see, Frailty may be a fine movie to watch, but it’s terribly tricky to review. For one thing, I have to be very careful not to give away, or indirectly suggest, the jaw-dropping, mind-blowing plot twist. Come to think of it, even warning that there is such a switcheroo may be telling you too much.

I guess it’s safe to tell you that most of the narrative is related in flashback – appropriately enough, on a dark and stormy night – as a seriously spooked-out fellow named Fenton Meiks (Matthew McConaughey) explains to a Dallas-based FBI agent (Powers Boothe) how his recently deceased younger brother grew up to be a most-wanted serial killer. Evidently, young Adam Meiks (Jeremy Sumpter) learned his lesson well while observing his father (Paxton), a sweet-tempered mechanic and loving father who occasionally slaughtered folks with a well-aimed swing of his trusty axe.

Young Fenton (played in flashbacks by Matt O’Leary) begs to differ, and warns his zealous father that, hey, murder is murder, no matter how demonic you think your victim might be. Not surprisingly, Fenton suffers dearly for offering this perfectly reasonable advice. To save himself, he must pretend to accept the notion that the family that preys together stays together. Nothing good comes of this.

OK, that’s all I can tell you about the plot. Actually I’ve told you one or two things that aren’t entirely true, but you’re supposed to accept them as the real deal until Paxton pulls the rug, and then the floorboards, out from under you. Frailty may remind you of The Night of the Hunter (or even To Kill a Mockingbird) in its ability to sustain a frightened child’s point of view. It definitely will leave you stunned and breathless, and perhaps fully prepared to argue with friends and total strangers about the meaning of the final scenes. Have fun.
Posted by Joe Leydon at 2/26/2017 12:56:00 PM 2 comments:

Arriving just in time to be even more relevant: From Nowhere 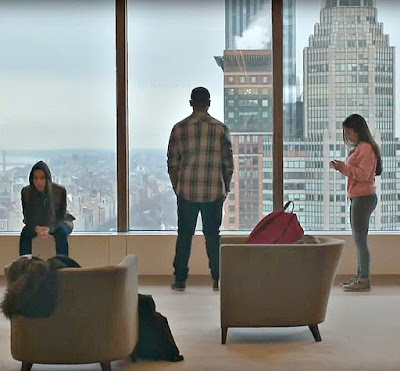 After seeing the provocative and powerful From Nowhere last year at the SXSW Film Festival in Austin, I wrote:

Arriving in the middle of an election season when debates over U.S. immigration policy have devolved into sloganeering and shouting matches, From Nowhere feels all the more urgent and relevant as it applies human faces to abstract statistics and arguments. Writer-director Matthew Newton (Three Blind Mice) neatly avoids predictability and melodramatic excess in focusing on three undocumented teenagers nearing graduation at a Bronx high school, effectively using the specifics of their individual situations to illustrate opportunities and obstacles in the path of anyone pursuing the American Dream while hiding in plain sight. Credible and creditable performances by a fine cast of promising newcomers and familiar veterans enhance the emotional impact of this low-key but compelling indie...

I know: It sounds a bit like one of those “Eat your spinach, it’s good for you” movies. But trust me: From Nowhere is not just a noble gesture — it’s also a compelling, well-crafted and impressively acted drama that arguably is even more relevant right now than it was last March. The movie begins its theatrical run in New York and Los Angeles February 17 before (I hope) rolling out to theaters nationwide. Here is my original Variety review, and here is a trailer.

Me and Steve Bannon go way back 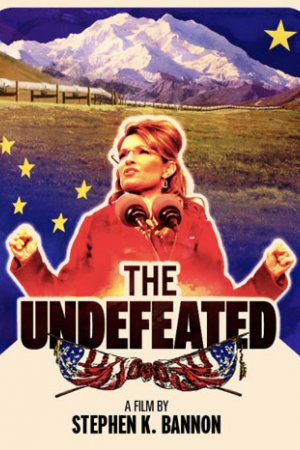 While reading Ann Hornaday's Washington Post piece about interviewing Steve Bannon last year at the Cannes Film Festival -- back when he was doing nothing more threatening than making right-wing agitprop documentaries -- I was reminded that I actually reviewed for Variety one of his more popular efforts as an auteur: The Undefeated, his 2011 feature-length mash note to Sarah Palin -- which co-starred, no kidding, Andrew Breitbart.

A sample paragraph: “Faster than the speed of thought, The Undefeated is a history lesson designed for students with minimal attention spans. Bannon strives to give every scene an insistently propulsive pace, relying heavily on smash cuts, skittish pans and self-conscious switches between color and black-and-white. [The director] overhypes much of his archival footage and almost drowns out some of his interviewees with the sort of thunderous music one normally hears only in movies when astronauts are preparing to blow up meteors. The interviews are shot in a swervy, jerky manner that may be intended to come across as dynamic, but actually appear to indicate the videographer was barely suppressing nature’s call.”

The funny thing is, my review was one of the more positive ones. But I bet that doesn't keep me off Trump's White House Enemies List. Especially if that list is ghost-written by, well, you know.

By the way: In her Washington Post, Hornaday notes that, over 25 years ago, Bannon served as executive producer for The Indian Runner, Sean Penn's first effort as a film director. Think those two guys still hang out together?
Posted by Joe Leydon at 2/05/2017 11:46:00 PM No comments:

It's about damn time: The Blackcoat's Daughter (a.k.a. February) opens March 31 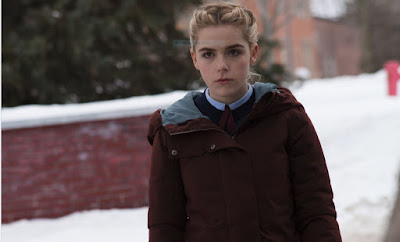 It was a different time, perhaps a better time. The sky was bluer, friends were truer. Most people — not me, mind you, but most other people — still thought Donald Trump would never, ever get the GOP nomination for President.

It was September 2015. And at the Toronto Film Festival, I saw a chilling little film called February. As I wrote in my original Variety review:

“Let’s address the obvious right off the bat: Yes, [February] is the first feature written and directed by Osgood Perkins — son of Anthony Perkins, the late, great actor who made his stab at immortality as Norman Bates in Alfred Hitchcock’s Psycho — and yes, this, too, is a thriller that generates a shock or two through the grievous misuse of cutlery. (Come to think of it, it also features a portentous close-up of water swirling down a bathtub drain.) But rest assured, this slow-burning, sure-footed scary movie is likely to prompt discussions about things other than family traditions — or, if you prefer, bloodlines. An atmospheric and suspenseful indie with a subtle but unmistakable retrograde feel, it should score with sophisticated genre aficionados and anyone else inclined to savor a stealthy, unsettling escalation of dread before full-bore horror kicks in.”

Not very long after the Toronto fest wrapped, February was renamed The Blackcoat’s Daughter. (That’s the title under which you’ll now find my review on the increasingly popular Variety.com website.) And then… well, not much. Until now.

A24, arguably the most venturesome distributor in the movie business right now, has announced a March 31 theatrical release date for February… er, I mean The Blackcoat’s Daughter. And if you can’t wait that long: It will be available exclusively on DirecTV starting February 16 before opening at theaters and drive-ins everywhere.

So what’s it all about? That’s difficult to say. In my revised Variety review, I explain:

“The challenge facing those eager to talk or write about The Blackcoat’s Daughter is simple yet daunting: You can’t provide too many details without spilling an inordinate number of beans. Indeed, it’s hard to praise the three lead performances [by Emma Roberts, Kiernan Shipka and Lucy Boynton] — which, not incidentally, are very good indeed — without spoiling the pleasure of appreciating how each actress approaches her role.”

Here is the trailer for The Blackcoat’s Daughter — which, I am happy to note, doesn’t give too much of the game away. (And yes, before you ask: My Variety review is quoted here. Twice.)