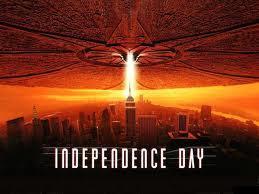 Must admit: The prospect of an Independence Day in 3D excites me much more than the possibility of a 3D Titanic ever did. If only because I would love to see this irresistibly rousing scene jump off the screen.
Posted by Joe Leydon at 5/31/2012 08:58:00 PM No comments:

Now showing at a Redbox kiosk near you: Dawn Rider

There's really no excuse for Dawn Rider, a direct-to-video remake of a 1935 B-Western with Christian Slater in a role originally played by John Wayne. You can read what I wrote about it for Cowboys & Indians magazine here. But if you'd rather not, don't worry, I won't take offense. On the other hand, if you do click over to the C&I website, you can read my preview of the upcoming Longmire TV series instead.
Posted by Joe Leydon at 5/30/2012 11:00:00 PM 1 comment:

Maybe so, if Sylvester Stallone and Robert De Niro really do sign on to play aging prizefighters who meet in a Grudge Match.
Posted by Joe Leydon at 5/30/2012 08:08:00 PM No comments:

Hatfields & McCoys -- The miniseries that made History 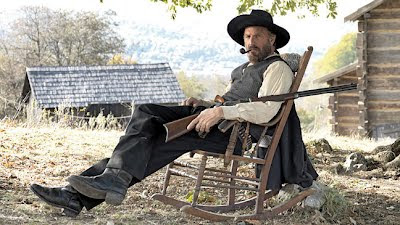 According to Variety, Part 1 of Hatfields & McCoys made cable-TV history when it aired Monday evening on the History network. And I'm sure it's all because viewers were coaxed into watching by my review on the Cowboys & Indians magazine website.
Posted by Joe Leydon at 5/29/2012 05:23:00 PM No comments:

Email ThisBlogThis!Share to TwitterShare to FacebookShare to Pinterest
Labels: Hatfields and McCoys

Judging from all reports I've read, the 2012 Cannes Film Festival maintained an air of decorum while drawing to a conclusion today. Trust me: That isn't always the case at the world's most famous film fest. Back in 1987, when Maurice Pialat's Under Satan's Sun was announced winner of the Palme d'Or, many folks in the audience at the awards ceremony responded with boos and rude comments. Pialat responded to that response with a classic bit of defiance. I was in the press room when this happened -- and my colleagues and I howled with laughter at the spectacle.
Posted by Joe Leydon at 5/27/2012 04:01:00 PM No comments:

I must confess: I didn't know much about Mumford & Sons until I savored the exuberantly entertaining documentary Big Easy Express at this year's SXSW Festival. But I was wowed by them once again tonight on Austin City Limits. But wait, there's more: I also got introduced to the Celtic punk band Flogging Molly on the same program. Verily, my cup overflows.
Posted by Joe Leydon at 5/26/2012 11:13:00 PM 1 comment: 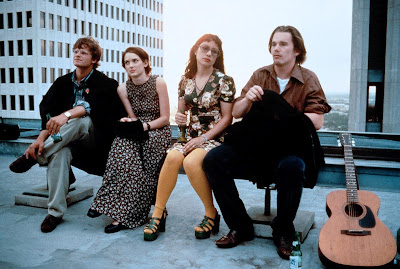 So what would you say is The Ultimate Houston Movie? Rushmore? Terms of Endearment? Or would you agree with many that the title should go to Reality Bites?
Posted by Joe Leydon at 5/25/2012 10:42:00 PM No comments: 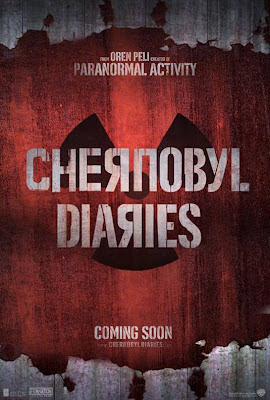 Preview: Chely Wright: Wish Me Away


Chely Wright: Wish Me Away, the spirit-lifting, prize-winning documentary about the country music star's bold decision to stride out of the closet and stand tall as a role model, opens June 1 in "limited release." Look for it at a theater near you. And if it's not playing near you, look for it on VOD. Why? Well, here's the best case I can offer, in my original Variety review.
Posted by Joe Leydon at 5/24/2012 12:10:00 AM No comments:

Not coming soon to a theater near you 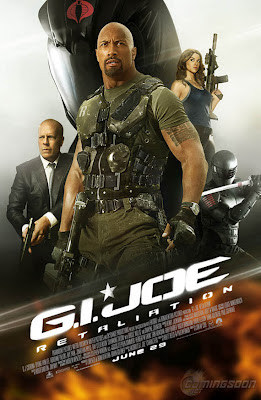 Well, gosh, now I'm really glad G.I. Joe: Retaliation didn't make the final cut for my summer movie preview story. And I'm really, really glad I didn't reference it on Great Day Houston -- if I had, they might not ever ask me back on the show.
Posted by Joe Leydon at 5/23/2012 04:04:00 PM 1 comment:

The lovely and talented Deborah Duncan is such a vivacious host, she can make even the dullest guest appear half-way interesting.
Posted by Joe Leydon at 5/22/2012 11:38:00 AM No comments: 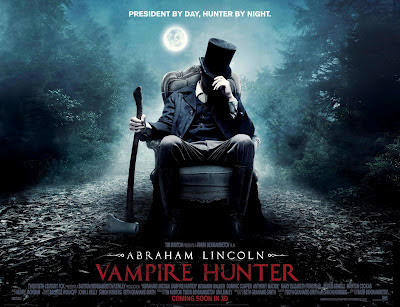 I'll appear on Great Day Houston at 9 AM Tuesday (May 22) on H-Town's Channel 11 to talk about summer movies like Abraham Lincoln Vampire Hunter -- and shamelessly plug my CultureMap article. Because that's how I roll.
Posted by Joe Leydon at 5/21/2012 04:51:00 PM No comments: 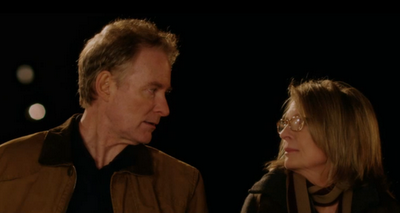 Here is my favorite Kevin Kline story: We’re riding the elevator down to the lobby of a swanky L.A. hotel at the end of a long day of interviews during the 1991 press gathering for Grand Canyon. And he’s politely listening to my whining about a decision I have to make soon – very soon, like within an hour or so.

As a film critic for The Houston Post, I really, really should go out that evening to see a nationally advertised advance screening of The Last Boy Scout, because I’ve already missed the press screening of that Bruce Willis flick back home in H-Town.

But gee whiz, a rep-house theater within an easy drive from the hotel is showing newly restored prints of two Francois Truffaut movies – Mississippi Mermaid and The Bride Wore Black – on a double bill. I’m flying home tomorrow morning, so tonight will be my only chance to see them. But Bruce Willis is a big star, and Last Boy Scout may be a big film. But I’m a big Truffaut fan – hell, I’m still mourning his 1984 death – and these two particular films aren’t in wide rep-house circulation. But I do kinda-sorta have a duty to my readers. But I…

Gently but firmly, Kline interrupts my blather. He looks me squarely in the eye, smiles just a bit, and says: “You’ve already made your decision, haven’t you?” His tone signifies he is not making a query, but stating a fact. And, of course, he is absolutely correct.

Flash forward 21 years, and wouldn’t you know it: Even as Kline and I are settling down for a chat about his latest movie – the wise and witty Darling Companion, in which he co-stars with the lovely and talented Diane Keaton (above) – we’re still talking about Truffaut. And other things as well. You can read the rest of my CultureMap.com Q&A here. 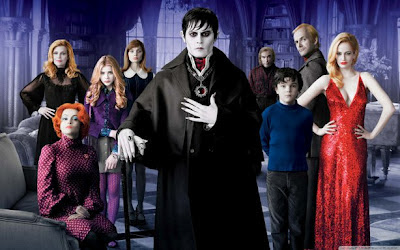 The good news: Dark Shadows – or at least a good three-quarters of it – works splendidly, artfully balancing affectionate homage with wink-wink satire. The bad news: Well, there is that remaining quarter. You can read my full review here.
Posted by Joe Leydon at 5/16/2012 11:58:00 AM No comments:

Damn! What more do these indie filmmakers want? Blood?

I've been in this movie reviewing racket for decades now, but I can't remember another time when I gave an indie film a good review -- and then got asked for a handout so somebody could actually release the film. I hope this doesn't become a trend. On the other hand, hey, if you have a few bucks to spare...
Posted by Joe Leydon at 5/11/2012 01:53:00 PM 1 comment:

Hey! Did you hear? They made a movie about The Avengers! 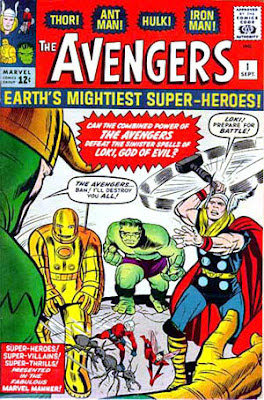 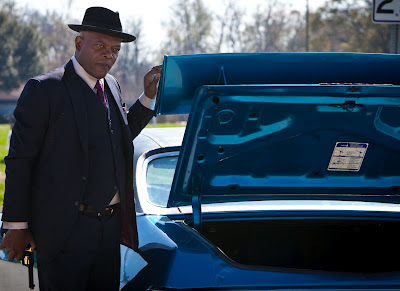 Believe it or not, The Avengers wasn't the only movie that opened this past weekend. Indeed, I reviewed two others -- both of which kicked off "limited" runs May 24 -- for Variety. Unfortunately, LOL was pretty much DOA. Meeting Evil was appreciably more enjoyable, if only because lead player Samuel J. Jackson (pictured above) offered a performance that could be labeled Swift's Premium and sold by the pound. As I noted in my review: "It probably won't go unnoticed that Meeting Evil is reaching theaters (after a warmup in the VOD bullpen) the same weekend that another film featuring Jackson makes its North American debut. You could say the actor is Bruce Banner in that one, but he Hulks out here."
Posted by Joe Leydon at 5/07/2012 09:17:00 AM No comments: