Roger Corman and Me 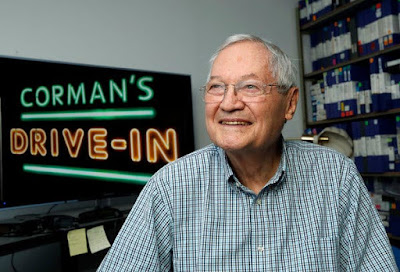 It will be my pleasure and privilege to conduct a Q&A with the legendary Roger Corman on Friday, Jan. 3, following the 7 pm screening of his classic Masque of the Red Death at the Museum of Fine Arts, Houston. And I’m even happier to report this will occur just one night after the Houston Film Critics Society — of which I am a founding member — honors Corman with a special lifetime achievement tribute during HFCA’s annual awards show at MFAH.
You can purchase tickets for both the awards show and the Masque of the Red Death screening at the MFAH website. Or you can opt not to attend either event, and spend the rest of your life tortured by gnawing regret. The choice is yours.
For the benefit of those who tuned in late…
(Cue the cut-and-pastings from the mini-bio I have prepared for my film studies students.)
Roger Corman has earned millions and entertained millions more throughout his decades-long career as a director, producer and/or distributor of over 300 highly successful small-budget, high-concept films, and continues to regale audiences with a steady output of similar fare for theatrical, home video, streaming and cable platforms. Indeed, just three weeks ago, the remarkably spry 93-year-old legend presented his latest effort as an executive producer, the sci-fi action-thriller Abduction, at the Bahamas International Film Festival — where, not incidentally, he and his wife, producer Julie Corman, conducted mentoring sessions with budding screenwriters.
The titles of many of Corman's 1950s films -- The Beast with a Million Eyes (1955), It Conquered the World (1956), Attack of the Crab Monsters (1957), War of the Satellites (1958) and A Bucket of Blood (1959) -- indicate why he earned early on the nickname “King of the Drive-in.” (In 1960, he produced and directed the cult classic Little Shop of Horrors, which reportedly was shot in two days and one night on a leftover set).
During the 1960s, however, he began to attract serious critical attention, domestically as well as internationally, as the auteur of several stylishly gothic horror films based on the stories of Edgar Allan Poe, including House of Usher (1960), The Pit and the Pendulum (1961), The Raven (1963), The Haunted Palace (1963), and, of course, The Masque of the Red Death (1964), featuring such established actors as Vincent Price, Basil Rathbone, Boris Karloff, Ray Milland, and Peter Lorre. (If you are of a certain age, these films are more likely than all the English classes in the world to have sparked any interest you’ve ever had in Poe’s literary output.) But Corman is equally proud of The Intruder (1962), his socially conscious indie drama about a charismatic demagogue (brilliantly played by a young William Shatner) who stokes racial tensions in a small Southern town. The movie was boldly progressive for its time, and remains, in the words of critic-historian  Wheeler Winston Dixon, “one of the most brutal, honest, and unflinching examinations of American racism in cinema history.”
In 1970, Corman formed New World Pictures, an independent mini-major that produced the work of such up-and-comers as John Sayles, Martin Scorsese, Joe Dante, Jonathan Demme, James Cameron, and Peter Bogdanovich. New World's first film, The Student Nurses (1970), was shot in three weeks for $150,000 and grossed more than $1 million. Other early New World releases included horror, biker, and women-in-prison films. The profits from these low-budget features allowed Corman to act as the American distributor for a number of prestigious foreign films. In a 10-year period, New World released three Academy Award winners in the Foreign Language Film category: Federico Fellini's Amarcord (1974), Akira Kurosawa’s Dersu Uzala (1975) and Volker Schlöndorff's The Tin Drum (1979). It should be noted that when Corman told Ingmar Bergman that he had attempted to expand the potential audience for the latter’s 1972 masterwork Cries and Whispers by releasing it in some drive-ins, Bergman approved.

Corman’s influence on American cinema has been incalculably enormous, both as a filmmaker — his Poe films continue to inspire many directors of gothic horror movies — and as a nurturer of up-and-coming, destined-for-prominence actors, screenwriters and directors. (In addition to those previously mentioned, Jack Nicholson, Francis Ford Coppola, Peter Fonda, Sylvester Stallone, Pam Grier, Bruce Dern, Gale Ann Hurd, Ron Howard and Robert Towne are among the luminaries he gave significant early-career boosts.) In 2009, the Motion Picture Academy’s Board of Governors voted to give Corman an honorary Oscar “for his unparalleled ability to nurture aspiring filmmakers by providing an environment that no film school could match.”

In short: Roger Corman has made an immeasurable impact on American movies — on movies, period — as a maverick and a mentor. And I would venture to say the secret of his success has been his savvy as an entertainer. He has always known that audiences will respond to a wide variety of films — everything from low-budget horror flicks to socially conscious dramas to slam-bang B-movies to challenging art-house fare — if they have access to, and are encouraged to sample, the full scope of that variety. To paraphrase Walt Whitman, Roger Corman understands and appreciates that cinema is large — it contains multitudes.

Once Upon a Time... in Hollywood and Marriage Story loom large among nominees for Houston Film Critics Society awards 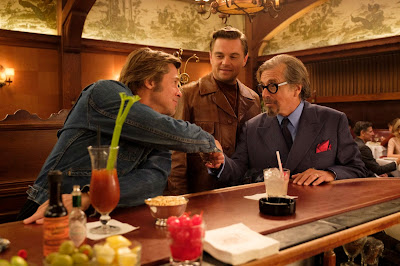 Quentin Tarantino’s Once Upon a Time… in Hollywood is the leader of the pack — but Noah Baumbach’s Marriage Story is not too far behind as they head toward the homestretch .

That’s the takeaway for anyone handicapping the 13th annual awards of the Houston Film Critic Society. Nominations for the organization’s accolades were announced late Sunday evening, with winners to be revealed during a Jan. 2 extravaganza at the Museum of Fine Arts, Houston.

Tarantino’s audaciously entertaining and wish-fulfilling comedy-drama picked up a total of seven nominations — including one in the HFCS’s Best Movie Poster Art Category — while Baumbach’s intimate view of marital discord scored six nods. Both films have been nominated for Best Picture, along with 1917, The Farewell, The Irishman, Jojo Rabbit, Joker, Knives Out, Parasite, and Uncut Gems.

“We’re a passionate, adventurous group,” says HFCS president Doug Harris. “This list of nominees represents the thousands of screening hours our members have devoted to uncovering the year’s most distinctive films so that we can bring the best of cinema from around the world to the audiences we serve.”

Because of unusually close voting tallies, Harris added, some categories have six, rather than the customary five, nominations. For example, six actresses will compete for Best Actress, including Charlize Theron of Bombshell, Awkwafina of The Farewell, Renée Zellweger of Judy, Scarlett Johansson of Marriage Story, Saoirse Ronan of Little Women, and Lupita Nyong’o of Us.

Best Actor nominees include Leonardo DiCaprio for Once Upon a Time… in Hollywood, Adam Driver for Marriage Story, Eddie Murphy for Dolemite is My Name, Joaquin Phoenix for Joker, and Adam Sandler for Uncut Gems.

Earlier this month, the HFCS announced its nominees for the Texas Independent Film Awards which honor films made in Texas: Bull, Building the American Dream, Nothing Stays the Same: The Story of the Saxon Pub, Seadrift and Sleeping in Plastic.

Winners in 18 categories will be presented at the Jan. 2 event. But wait, there’s more: Legendary producer, director and talent nurturer Roger Corman will be on hand to receive a lifetime achievement award. (The following evening, Jan 3, Corman will return to MFAH for a screening of his 1964 classic The Masque of the Death, and a post-screening Q&A conducted by... by... well, actually, by me.) And Ellyn Needham, wife of the late movie stunts pioneer Hal Needham, will present the HFCS’s inaugural award for Best Stunt Coordination Team.

Tickets for the 13th annual HFCS Awards can be purchased on the MFAH website. Ticketholders will be invited to attend, at no additional charge, an after party across the street from the Museum of Fine Arts, Houston at the Ultimate Ransom Room at the Hotel ZaZa Houston Museum District.

The Houston Film Critics Society’s 13th Annual Movie Awards are underwritten in part by Leonard Courtright and the Keystone Family of Companies, with additional support provided by Balcones Distilling.

Best Picture
1917; The Farewell; The Irishman; Jojo Rabbit; Joker; Knives Out; Marriage Story; Once Upon a Time… in Hollywood; Parasite; Uncut Gems

Best Screenplay
Knives Out; Marriage Story; Once Upon a Time… in Hollywood; Parasite; The Farewell

Best Cinematography
1917; The Irishman; The Joker; Once Upon a Time… in Hollywood; Parasite

Best Original Song
Glasgow, Wild Rose; Home to You, The Aeronauts; I Punched Keanu Reeves, Always Be My Maybe; (I’m Gonna) Love Me Again, Rocketman; Into the Unknown, Frozen II; Stand Up, Harriet

Texas Independent Film Award
Bull; Building the American Dream; Nothing Stays the Same: The Story of the Saxon Bar; Seadrift; Sleeping in Plastic

Best Movie Poster Art
Birds of Passage; John Wick: Chapter 3 Parabellum; Once Upon a Time… in Hollywood; Parasite; Portrait of a Lady on Fire; The Last Black Man in San Francisco. 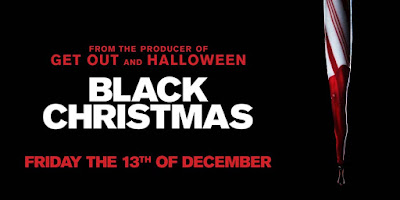 I have not yet seen the new Black Christmas — curiously enough, it was not programmed for the Bahamas Film Festival, which I am currently attending — but I can only hope, for the sake of those who do see it, that it is better than the version I reviewed for Variety before reporting on that unpleasant task back on Christmas Day 2006.