Six years ago tonight: I saw “Nashville” in Nashville thanks to Seth Rogen and Kim Jong-un 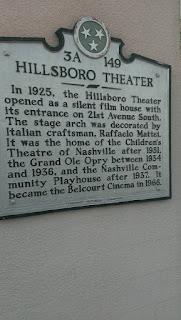 On June 11, 2015, I saw Nashville in Nashville on the exact 40th anniversary of the classic film’s release. But wait, there’s more: I saw it at the Belcourt Theatre, Music City’s premier art-house, which fleetingly was home of the Grand Ole Opry.

And I owed it all to Seth Rogen. And Kim Jong-un.

And thereby hangs a tale.

This could be amusing or insufferable — but I have a sneaking suspicion I will be laughing like an inebriated hyena throughout most of it. Thank you, Netflix, for the Abraham Lincoln: Vampire Hunter sequel I didn’t know I needed.

The logline: “In this wildly tongue-in-cheek animated revisionist history, a chainsaw-wielding George Washington assembles a team of rabble rousers — including beer-loving bro Sam Adams, famed scientist Thomas Edison, acclaimed horseman Paul Revere, and a very pissed off Geronimo — to defeat Benedict Arnold and King James in the American Revolution. Who will win? No one knows, but you can be sure of one thing: these are not your father’s Founding… uh, Fathers.”
The voice talent: Channing Tatum as George Washington; Jason Mantzoukas as Samuel Adams; Olivia Munn as Thomas Edison (well, why not?); Bobby Moynihan as Paul Revere; Judy Greer as Martha Washington; Will Forte as Abraham Lincoln; Raoul Max Trujillo as Geronimo; Killer Mike as Blacksmith; Simon Pegg as King James; Andy Samberg as Benedict Arnold.
Posted by Joe Leydon at 6/03/2021 01:14:00 PM 1 comment: