To celebrate the birthday of Denholm Elliott, here is video of the late, great British actor pointing a peeing dog at Dudley Moore

On this date in 1922, Denholm Elliott was born in Ealing, Middlesex, England. The great British actor — who passed away in 1992 — distinguished himself in many movies, most notably Station Six Sahara, King Rat, Alfie (as the seedy abortionist hired by Michael Caine’s irresponsible womanizer), Too Late the Hero, The Apprenticeship of Duddy Kravitz, A Doll’s House, Robin and Marian, Raiders of the Lost Ark and Trading Places.

But I must confess: Whenever I hear or read Elliott’s name, the first movie that pops into my head is The Hound of the Baskervilles, a spoofy 1978 take on the Sir Arthur Conan Doyle story directed by Andy Warhol protégé Paul Morrissey, starring Peter Cook and Dudley Moore as, respectively, Sherlock Holmes and Dr. Watson. Although it went unreleased in the United States until after Moore had scored box-office hits with Ten (1979) and Arthur (1981), my wife and I saw it during a day trip to London, Ontario while attending the 1978 Stratford Shakespeare Festival (where, by the way, we saw Maggie Smith in Macbeth and Private Lives, so feel free to turn green with envy).

Critics have never been kind to this film, but I count it among my most treasured guilty pleasures. And the first time I saw Elliott aiming a urinating canine at Moore — well, it’s the closest I’ve ever come to literally falling onto the floor laughing since I first saw the killer rabbit scene in Monty Python and the Holy Grail.

P.S. The one time I ever got to do a telephone interview with Denholm Elliott, during my 1982-95 run as film critic for The Houston Post,  I figured it would be a good idea to wait until the very end of the conversation to mention how much I was amused by this scene. And I can’t tell you how relieved I was to hear that he, too, thought it was pretty damn hilarious.

Email ThisBlogThis!Share to TwitterShare to FacebookShare to Pinterest
Labels: Denholm Elliott, Dudley Moore, Peter Cook, The Hound of the Baskervilles

James Mason didn't always drink wine. But when he did, he preferred to drink... Thunderbird?!?!

Obviously, unlike Orson Welles, The World's Second-Most Interesting Man drank some wine way before its time.

Looking back at Doris Day and Pillow Talk 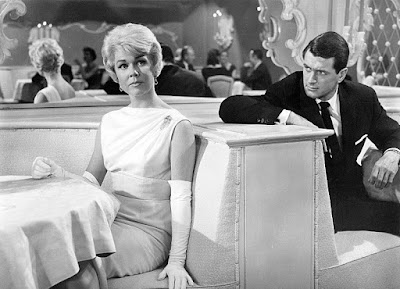 As a tribute to Doris Day — who passed away today at age 97 — I offer this chapter from my 2004 book “Joe Leydon’s Guide to Essential Movies You Must See.” (Trust me: The title was not my idea.)

Whenever a film critic tries to disparage a romantic trifle by likening it to “a Doris Day movie,” you can be sure the reviewer isn't referring to Calamity Jane or With Six You Get Eggroll. The belittling allusion is critic-speak shorthand for a specific type of glossy fluff that flourished between the late 1950s and the mid ’60s, a genre best represented by Pillow Talk, the first and arguably best of some half-dozen movies that irreversibly established Day as the Virgin Queen of wholesome sex comedies.

Very much a pop-culture product of its time — and, as such, more enlightening than most historical or anthropological overviews of the period’s mood and mores — Pillow Talk cast Day as... well, to use the quaint nomenclature of the time, a career girl. She was 34 years old when production began in early 1959, and already had more than 20 major movie credits on her resume. But on the advice of her agent-husband, Martin Melcher, the self-styled financial whiz who would eventually squander most of her millions on ill-advised investments, Day decided to jump-start her temporarily stalled career by not acting her age.

The first image we have of Day in Pillow Talk is an admiring close-up of her lovely legs as she arranges her stockings. But don't misunderstand: She's in her own bedroom, alone, getting dressed for work. This bait-and-switch is typical of the tickle-and-tease that passed for sophistication in pseudo-risqué comedies of the era. (The DVD edition of “Pillow Talk” includes the original 1959 coming-attractions trailer, which promises “the most sparkling sex-capade that ever winked at conventions.” Yeah, right.) Another distinguishing characteristic: The movie's depiction of single working women — whoops, excuse me, I meant to say “career girls” — as pitiably incomplete and unhappy creatures in desperate need of a good man, a lusty ravishing or, preferably, both.

Day plays Jan Morrow, an interior decorator who's sufficiently successful to afford a stunning wardrobe, a spacious Manhattan apartment, and a housekeeper given to excessive drinking and wisecracking. Early on, however, Pillow Talk tips its hand by underscoring Jan’s true worth in the world. When she complains about the playboy who monopolizes their shared party line, a phone company official makes sympathetic noises, but claims he can't do anything to solve the problem. Yes, he knows that Jan needs to use her phone for business purposes. But, no, she can’t be placed any higher on the list of folks waiting for single lines. Unless, of course, some kind of emergency arose. “If you were to become pregnant,” he explains, “you’d jump right to the top of the list.” But -- remember, this is 1959 — that would require a husband, right?

Actually, Jan does have a serious marriage proposal to contemplate: Jonathan Forbes (Tony Randall), a fabulously wealthy client, wants to make her his fourth wife. But Jan isn’t interested, and not just because of Jonathan’s matrimonial track record. She simply doesn’t love the guy. And she doesn't want to marry anyone just for his money.

Could it be that Jan enjoys her independence? That's her story, and she's sticking to it. But Alma (Thelma Ritter), her cynical housekeeper, isn't convinced: “If there’s anything worse than a woman being alone, it's a woman who says she likes it.” Indeed, even the annoying playboy — played by Rock Hudson as the kind of guy who, in an updated remake, would likely read Maxim and Playboy — feels entitled to make snide remarks about Jan’s unmarried status. If she doesn’t like to hear his crooning sweet nothings to his many girlfriends every time she picks up the phone, well, that's her problem, not his. “Don't take your bedroom problems out on me,” he snarls.

Naturally, these opposites are destined to attract. Brad Allen (Hudson) — who just happens to be a good friend of Jonathan — is intrigued when he fortuitously recognizes Jan in a nightclub. She doesn't know who he is, however, and he contrives to hide his true identity by posing as a courtly Texas gentleman named Rex Stetson. He begins a meticulously chaste courtship, figuring the best way to lure Jan into bed is to behave as though his intentions are purely honorable.

And just to have a little fun at her expense, he drops none-too-subtle hints that any guy who's this polite must be — wink-wink, nudge-nudge — very devoted to his mother. (One can only wonder what mixed emotions Hudson felt as the famously closeted gay actor played a straight character who pretended to be effeminate.) Despite Rex’s pronounced “sensitivity” — or, more likely, because of it — Jan falls for his smooth talk. But just before Brad can make his move — are you ready for this? are you sitting down?   — he realizes he has truly fallen in love with her. And even then, he’s forced to delay his gratification when she sees through his role-playing.

Brad desperately woos her, apologizes to her, even hires her to redecorate his Hugh Hefneresque apartment. When Jan gets even by turning his love shack into a tacky faux bordello, Brad responds by smashing through her door, grabbing her out of bed, and carrying her down the street, back to his place. She squawks and complains, but, oddly enough, no passer-by comes to her aid. (Indeed, a passing cop more or less gives Brad his “Atta boy!” approval.) Or maybe it's not so odd after all: As I said, this is 1959, back when men were able to do this sort of thing with impunity — in the movies, at least — and women, when they came to their senses, seemed to really, really like it.
The funny thing is, even as you recognize the smug (and frankly sexist) assumptions on which the comedy is based, Pillow Talk remains inexplicably irresistible as a lavishly produced, campily retrograde guilty pleasure. (In 2003, the makers of Down With Love paid it affectionate homage by hiring Ewan McGregor and Renee Zellweger to channel Rock and Doris.) It helps that Day and Hudson are such appealing farceurs, and the supporting players are such scene-stealing scamps. It helps even more that much of this particular “Doris Day movie” is undeniably hilarious, albeit in some of the most blatantly non-PC ways imaginable.

Feel free to laugh with Pillow Talk — but don’t be too quick to laugh at a glossy romantic comedy that many people took very seriously back in the day. One of the highest-grossing movies released during the 1950s, it edged out Wild Strawberries, North by Northwest and The 400 for Best Original Screenplay at the 32nd annual Academy Awards. That same year, Doris Day received her one and only Oscar nomination as Best Actress for her game performance in this “sex-capade.” No kidding.
Posted by Joe Leydon at 5/13/2019 11:47:00 PM 1 comment: