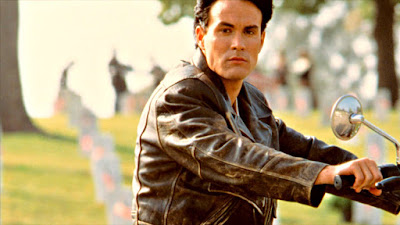 On this date in 1993, Brandon Lee — the then-28-year-old son of the legendary Bruce Lee — was killed in an accident while filming The Crow.

When I interviewed him for Rapid Fire in 1992, he told me how much he was looking forward to making The Crow -- and to breaking stereotypes by becoming a bankable Asian-American leading man.

Few things in life are sadder than a promise forever unfulfilled. 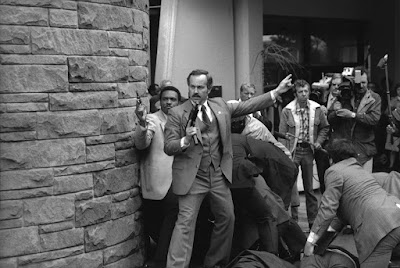 Forty years ago yesterday, I interviewed Lee Marvin at the USA Film Fest in Dallas. I joked with him that he had shot the President – Ronald Reagan – back in The Killers (1964), Reagan’s last movie. “Yeah,” he responded with a wolfish grin, “but he wasn’t President yet when I shot him.”
Forty years ago today, John Hinckley tried to gatecrash into history by taking aim at the Commander in Chief. I was interim A&E editor for The Dallas Morning News, so I wound up working on the first and only “Extra” edition of my newspaper career. (It hit the streets that afternoon.) People may forget this now, but the early reports indicated Reagan was a goner. Film critic Philip Wuntch was out in L.A. for the Oscars, and he filed an absolutely brilliant overview of Reagan’s movie career on about one hour’s notice. And our theater critic Diane Werts went over to SMU where the USA Film Fest was taking place, to get a quote from Marvin. Team work, folks.
I forget who it was, but someone showed up that afternoon, along with their publicist, for a previously scheduled interview to promote their next movie. I think I may have raised my voice few octaves when I explained that we had more important things going on. They left, but only reluctantly. Priorities, people.
(Fun fact: The previous January, a Dallas TV station had programmed a Ronald Reagan movie each afternoon during the week of his inauguration. Trouble is, for Inauguration Day, someone at the station had scheduled – yes, you guessed it – The Killers. I pointed this out to our TV critic, Ed Bark, who wrote what I recall was one of the funniest columns of his career, taking the station to task. Within hours after the column appeared, the station changed its lineup. P.S. Considering that the station and the newspaper were owned by the same company at the time, this was an amazingly ballsy move on Bark’s part. But he remained in his job there a lot longer than I did mine.)
Posted by Joe Leydon at 3/30/2021 10:10:00 AM No comments:

Update: Talking About (Another) Possible Closing of the River Oaks 3 Theatre 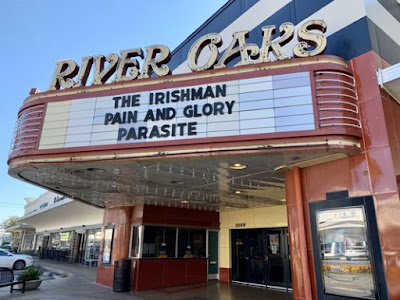 Looks like the Landmark River Oaks 3 — not just the last remaining vintage movie theater in Houston, but H-Town’s last dedicated arthouse of any sort — is in danger of closing again. I’ve been invited by genial host Craig Cohen to join him and Houston Film Critics Society president Doug Harris to discuss this dire situation Thursday on the KUHF radio program Houston Matters.

The conversation begins around the 36:44 mark here.