Hanging Chads, Jumping Couches and Other Memories of Election Day 2000 in Florida 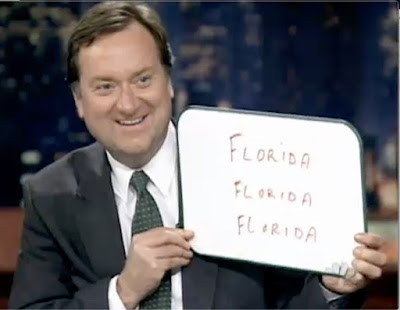 On Election Day twenty years ago, I was at Ground Zero in Florida’s Broward County when the chads started hanging. And thereby hangs a tale.

I was in the area to attend the 2000 Fort Lauderdale Film Festival, one of several regional festivals that once invited me to partake of their hospitality — and their films — back when I used to be somebody. On Election Day, however, a colleague and I slipped away from the festivities (at her urging, I must admit, though she didn’t have to work hard to convince me) so we could do volunteer work at the local Florida Democratic Party headquarters. Mostly, I fielded phone calls from senior citizens who needed transportation to voting places. Later in the day, I also went door to door to pass out flyers, in the hope of driving late deciders to the polls.

That night, as my colleague and I watched the election returns in my hotel room, I… I… well, I went absolutely nutzoid when the first reports came in that Al Gore had won Florida, and therefore was projected as the next President. You think Tom Cruise did some couch jumping back when he was sweet on Katie Holmes? Hah! My colleague actually tried to quiet me down, for fear people in other rooms would complain about the racket while I hopped up and down on the couch, the coffee table, the kitchen breakfast bar, etc.

But then, of course, the first reports were “corrected,” and the Florida projection was withdrawn. And then... Well, that’s when I put down my glass, and picked up the bottle. And when that one was empty, I picked up another one. And after my colleague left, I uncorked a third.

The next day, I awoke with a very bad hangover. My condition improved only slightly when colleague called to awaken me with what, at the time, seemed like very good news:  Gore had withdrawn his concession. Everything was still up in the air when I left Fort Lauderdale, but there was hope. A hope that was not dashed until a few weeks later, when, while I was at a movie junket in New York, I turned on the TV in another hotel room to learn Gore had turned in the towel.

I am not at all ashamed to admit that, for days and weeks and months and, yes, years afterward, I sporadically caught myself thinking: “Dammit! If only I had managed to get more vans out for voters! If only I had placed flyers on more doors! If! If! If!” Yep, another textbook example of Catholic guilt experienced by the eldest child of a dysfunctional family: It was all my fault.

Postscript: Seven years later, I was introduced to Al Gore at the Nashville Film Festival. Someone told him I had written a rave review of his Oscar-winning documentary An Inconvenient Truth  as a free-lancer for the Tennessean newspaper — no, really, it was somebody else who did the mentioning, not me — and he smiled graciously while shaking my hand.  In fact, I swear to God, he actually bowed slightly. For about a nanosecond, I thought of telling him the story of my seven-year guilt trip. But then I came to my senses, and made polite small talk instead during our brief encounter.

So now I am telling you the story I lacked the nerve to tell Al Gore. Because as much as I feel optimistic about Election Day 2020, I can’t totally banish nagging fears that Election Night might have some nasty surprise in store. I have champagne on hand to celebrate. But I also have a few bottles of the cheap stuff to dull the pain of possible disappointment. On the other hand, this time I know: If something terrible does happen, it won't be my fault. Honest.