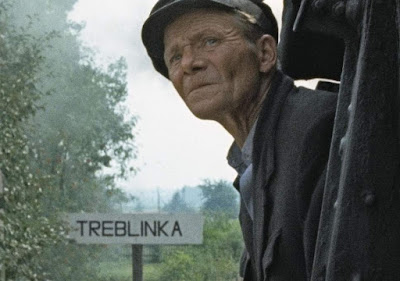 As a tribute to French filmmaker Claude Lanzmann, who passed away Thursday at age 92, I am offering my original 1986 review of his monumental masterwork, Shoah.

After 9 ½ hours of Shoah, Claude Lanzmann's exhaustive and exhausting oral history of the Holocaust, we’re left with unforgettable moments.


Like the moment when a farmer who tilled his fields near the Treblinka death camp recalls the screams of Jewish prisoners: “At first, it was unbearable. Then we got used to it.'” Or the moment when Simon Srebnik, a survivor of the genocidal campaign at Chelmno, returns for a reunion with villagers who profess to be happy about his survival. “Why do they think this all happened to the Jews?” Lanzmann asks the villagers through an interpreter. “Because they were the richest!'” a villager replies. Srebnik winces.


There's the moment when Abraham Bomba, a barber who cut the hair of women bound for the Treblinka gas chamber, breaks down during Lanzmann's inquiries. Lanzmann is persistent: He must know what happened when Bomba’s friend, a fellow barber, realized his wife and sister were among the prisoners about to be gassed. “Don't make me go on, please,” Bomba implores Lanzmann. But Lanzmann is quietly, implacably firm: “We must go on.” So Bomba tries to describe a scene almost too agonizing for mere words.


Later, there’s a moment when Franz Suchomal, former SS Unterscharfuhrer at Treblinka, vigorously sings a tune taught to Jewish prisoners at his death camp. He finishes the song, then tells Lanzmann: “No Jew knows that song today.” Suchomal smiles as he speaks.


Henrik Gawkowski doesn't smile as he remembers driving the train that brought whole boxcars of Jews to Treblinka. He talks of hearing the moans and shrieks over the sound of his locomotive. He talks of remaining almost constantly drunk to deaden his senses. He talks of trying to warn his disembarking passengers that they were not going to work details, that they were about to be processed by a killing machine. He traces a line across his neck with his index finger. The moment is terrifying.


Such moments are separated by many long minutes and hours during Shoah. (The title is a Hebrew word, meaning “annihilation.”) But even though the film is punishingly long and deliberately repetitious, I have no idea where I would begin to cut this astonishing epic. Lanzmann's ambition is nothing if not daunting: Without resorting to documentary footage or period photographs, he wants to re-create and re-examine the Holocaust by presenting it through the words of survivors, witnesses, perpetrators and not-so-innocent bystanders. His approach is remarkably effective, more often than not, and his interviews — some of them recorded with hidden video cameras — are chillingly enlightening.


He juxtaposes the words with jarring images. The lush green fields we see were once the site of mass graves described by death camp survivors. The camera sweeps us down a long country road, forcing us to retrace the route taken by Jews on their way to destruction at Auschwitz. And repeatedly, insistently, there are the trains: belching steam, rattling along tracks, relentlessly moving toward the end of the line.


The device is poetic, but the interviews are prosaic. Lanzmann doesn't want to deal in euphemisms or generalizations. He has the patience to ask specific questions: How big were the crematoriums? How many people died each day in the Warsaw ghetto? Exactly how did the German government pay for the “resettlement” of Jews? (A low-level Nazi era bureaucrat recalls buying one-way tickets —at excursion-rate prices — with money confiscated from Jews when they were arrested. (That’s right, the victims paid for their own trips to the gas chamber.) What was the life expectancy of a Jew who arrived at Treblinka? (Usually, four hours.) How did SS commanders dispose of so many bodies?


And most important of all: Why? Why did the Polish underground refuse to give weapons to the Jews in the Warsaw ghetto? Why did the Allies ignore the pleas of Jewish leaders to launch a special campaign against the Holocaust? Why did people in Germany and Poland deliberately ignore the obvious evidence of the monstrous crimes being committed at the death camps? Why did this all happen to the Jews?


Many of the survivors have moved beyond grief, have numbed themselves so they can live with the guilt of living while so many others died. (“If you could lick my heart,” a survivor tells Lanzmann, “it would poison you.”) Other participants in this tragedy have their own reasons for forgetting. But Lanzmann, who spent more than a decade on Shoah, will not forget. And he will not let you forget. His film is a masterwork, difficult to endure but indelibly illuminating.
Posted by Joe Leydon at 7/05/2018 12:29:00 PM 3 comments: