Review: When in Rome 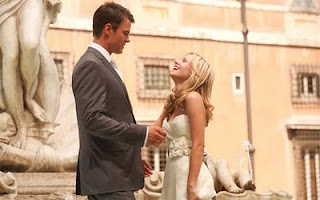 Except for boyfriends and husbands reluctantly dragged along to megaplexes by their significant others, few folks who actually bother to buy tickets to When in Rome likely will dislike this predictable but pleasant rom-com fantasy. Trailers and TV spots already have alerted potential audiences to expect formulaic froth: Romantic misadventures of exceptionally attractive people who, while aided or impeded by aggressively colorful supporting players, maneuver through comical contrivances both mundane and supernatural. This is a fairly generic product, but it should attract enough consumers to post respectable theatrical numbers. Upbeat buzz by satisfied customers could sweeten homevid biz. You can read my Variety review here.
Posted by Joe Leydon at 1/28/2010 09:02:00 PM No comments:

Email ThisBlogThis!Share to TwitterShare to FacebookShare to Pinterest
Labels: "When in Rome", Josh Duhamel, Kristen Bell

Thank you, MovieMaker! (And kiss my irradiated ass, Cancer!) 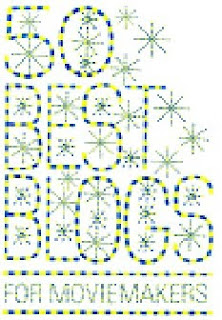 I'd like to thank all the little people who made it possible for me to appear on MovieMaker Magazine's list of The 50 Best Blogs for Moviemakers. It's a thrill just to be nominated, of course. But to actually be included among so many august colleagues is... Hey, wait: I guess this means I'll actually have to get off my lazy rump, quit bitching about health worries and multiple commitments, and start posting as much as I used to, huh? Damn. Do I get any slack cut because, since December, I've been receiving radiation treatments for prostate cancer? No? Well, then I guess it was a good thing that I had my final irradiation this morning. With a great honor comes great responsibility. And I promise: I really will have my Top Ten of 2009 posted before Oscar Night.

BTW: You can get a really great deal on subscribing to MovieMaker Magazine by clicking here. What's that? Is this promo some kind of quid pro quo? Gosh, how can you even think that? How low do you think I would stoop to curry favors or elicit sympathy? Incidentally, did I mention my cancer treatments...?
Posted by Joe Leydon at 1/27/2010 02:12:00 PM 3 comments:

Another 'Blind' triumph for Sandra Bullock 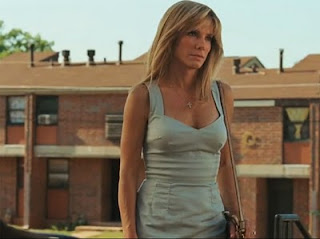 As I noted in my original Variety review of The Blind Side: "It's difficult to imagine anything that could long impede or contain the force of nature that is Leigh Anne Tuohy, the feisty Memphis belle played by [Sandra] Bullock with equal measures of acerbic sass, steel-willed brass and unabashed sentiment. Bullock is thoroughly convincing in the role -- right down to her credible accent and the blonding of her normally brown tresses -- and she's not afraid to occasionally keep audiences guessing as to whether Leigh Ann's actions are driven by a heart of gold or a whim of iron." Bullock won a Golden Globe last week, and a Screen Actors Guild award tonight. And she owes it all to me. Yeah, right.
Posted by Joe Leydon at 1/23/2010 09:28:00 PM 1 comment: 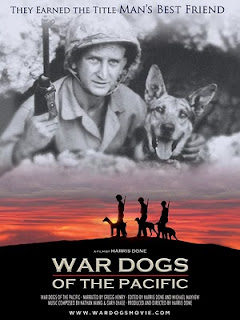 War Dogs of the Pacific

-- not to be confused, of course, with Hellcats of the Navy

What can you say about a 72-year-old writer who died? That, on the strength of a single novel

– based on his own screenplay, instead of the other way around – he made a serious bid for pop-culture immortality? Maybe, maybe not. I know a few folks of my generation who still get misty-eyed when they think of how Ryan O'Neal was shattered by the loss of Ali MacGraw. On the other hand: Judging from the blank expressions I receive from students whenever I mention the title Love Story

in my film studies classes at University of Houston and Houston Community College, the enduring impact of that book and movie may be more apparent than real.

The funny thing is, while researching my master’s thesis on the New Hollywood Era three years ago – yeah, I was in my 50s before I went for the advanced degree; you have a problem with that? – I came across this 1971 Time Magazine cover story that, in retrospect, seems ludicrously misguided in its attempt to read the smash success of Love Story as some sort of game-changing counterbalance to the seemingly unbridled licentiousness of books, movies and pop tunes of the time. Maybe that should be a lesson to us all: Today’s phenomenon can be tomorrow’s obscurity. Consider that, all you Avatar fans. There may be come a day when you’ll have to explain to your grandkids just what the hell Pandora was. Just as I occasionally have to explain the significance of: “Love means you never have to say you’re sorry.”

BTW: I can’t helping noticing that while Erich Segal is getting fair credit in his obits as co-screenwriter of Yellow Submarine, everyone seems to forget that he also wrote a couple other scripts for movies from roughly the same era -- The Games and R.P.M. – that, last time I checked, aren’t available on DVD. Trust me: They weren’t that bad.
Posted by Joe Leydon at 1/19/2010 09:45:00 PM No comments:

One of my favorite moments during the Golden Globes Awards: Host Ricky Gervais (criminally underutilized throughout the evening) strolls onto the stage with a beer in his hand, and a smirk on his face, as he announces: “Yeah, I’ve had a couple. I’m not going to lie to you. I like a drink as much as the next man. Unless the next man is Mel Gibson.” And then he introduces... Mel Gibson. To Gibson’s credit, the actor/director/mugshot subject played along with the gag by ignoring audible gasps from audience members and actually feigning drunkenness, fleetingly, before presenting the Best Director award.

(And speaking of inebriation: Just how hammered was presenter Harrison Ford? Two bottles of wine? Three? With maybe a doobie or two for good measure?)

Other random musings and impolite observations inspired by Sunday's Golden Globes extravaganza can be found here.
Posted by Joe Leydon at 1/18/2010 06:27:00 AM No comments: 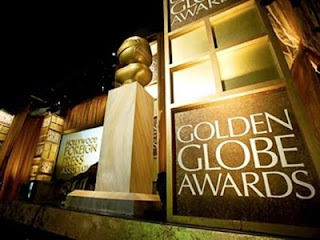 Spider-Man 4 is down for the count? 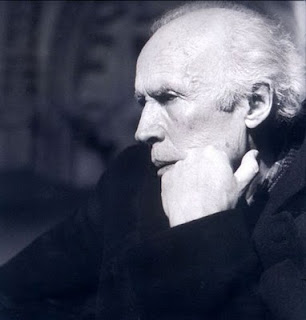 The great French filmmaker was a sly but sympathetic observer of human folly, forever attentive to the ways intelligent and articulate people tend to over-analyze everything, even their own emotions, and very often wind up talking themselves out of opportunities for happiness. He was at the vanguard of the French New Wave during the late 1950s, alongside Francois Truffaut, Jean-Luc Godard and other impassioned young critics who gradually evolved from writing about movies to making their own. But as Dave Kehr notes in his eloquent New York Times tribute: "In opposition both to the intensely personal, confessional tone of much of the work of Truffaut and the politically provocative films of Godard, Mr. Rohmer remained true to a restrained, rationalist aesthetic, close to the principles of the 18th-century thinkers whose words he frequently cited in his movies. And yet Mr. Rohmer’s work was warmed by an undercurrent of romanticism and erotic yearning, made perhaps all the more affecting for never quite breaking through the surface of his elegant, orderly films." You can divine Rohmer's influence in films by such diverse directors as Whit Stillman, Steven Soderbergh, Andrew Bujalski and, especially, Richard Linklater (whose Before Sunrise

is, arguably, the best Eric Rohmer movie that Rohmer himself didn't actually make). Better still, you can go back straight to the source by renting or purchasing such Rohmer masterworks as My Night at Maud's

, Chloe in the Afternoon

, Pauline at the Beach

An easy rider nears the end of his journey 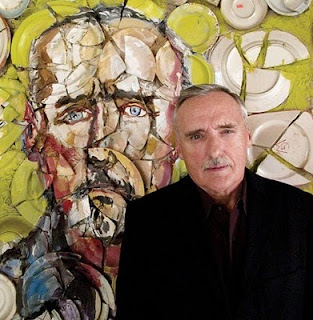 Two years ago, I noted that the coverage of Paul Newman's battle with cancer reminded me of a line from Edward Albee's play All Over.

Early in that drama, as hordes of journalists maintain an attentive vigil off-stage, an intimate of a fatally ill notable remarks: "That’s the final test of fame, isn’t it, the degree of it: Which is newsworthy, the act of dying itself, or merely the death?" To put it another way: When you're admired, the press covers your death. But when you're an icon, the press covers your dying.

Alas, another death watch has begun...

For those who simply cannot get enough of Nicolas Cage... 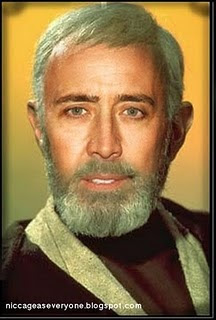 A new site where Nicolas Cage is everyone, and everyone is Nicolas Cage. The possibilities are endless. (Hat tip to reader Movie Gal, the lady with the drawling talk and the sashaying walk.)
Posted by Joe Leydon at 1/09/2010 06:17:00 PM 2 comments:

She won't dance, don't ask her 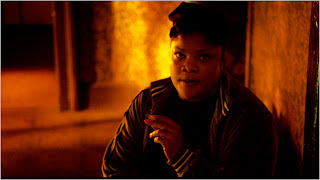 Certain movie bloggers -- cough, cough, Jeff Wells, cough! -- have been critical of  actress/stand-up comic/TV host Mo'Nique and her... well, let's say low-key approach to campaigning for an Oscar nomination (which, I would hasten to say, she certainly deserves for her memorable performance in Precious). Indeed, to paraphrase Faye Dunaway in Bonnie and Clyde

-- Mo'Nique's peculiar idea about campaigning is no campaigning at all. But here's the thing: As she explains today to David Carr of The New York Times, Mon'Nique also has the peculiar idea that, hey, the freakin' work should speak for itself. So there.
Posted by Joe Leydon at 1/08/2010 12:45:00 PM No comments: