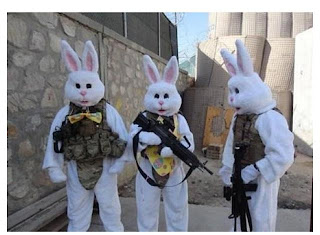 An Unreal Dream: The sequel 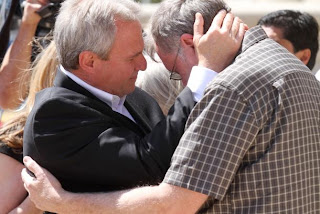 Looks like there really is a kinda-sorta happy ending to An Unreal Dream: The Michael Morton Story, which I reviewed for Variety at SXSW.
Posted by Joe Leydon at 3/30/2013 12:09:00 AM No comments:

North Koreans want to target Austin? It's all my fault!

No kidding: If the North Koreans have Austin on their must-nuke list, I can't help thinking it's because I had nice things to say about Red Dawn last fall at Fantastic Fest in the Teas capital. I feel so... responsible. Yikes.

Deep thoughts about Big Ass Spider and other SXSW 2013 flicks 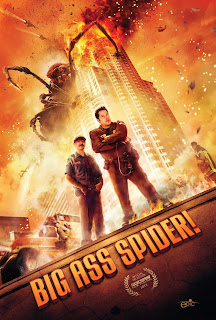 As I admitted a few weeks ago, I actually was looking forward to Big Ass Spider! at SXSW this year. And guess what? It was every bit as funny/crazy as I hoped it would be.

The best part about it: Director Mike Mendez and co-scripter Gregory Gieras don't try to be too obviously wink-wink, nudge-nudge clever as they pay affectionate homage to B- and Z-movie conventions. Indeed, I suspect that if you could somehow digitally lift the supporting performances of Ray Wise (as a military official deeply concerned about the eponymous creature) and Patrick Bauchau (as a scientist whose advice is not entirely trustworthy) and drop them into a dead-serious cheapie-creepie of yesteryear, they wouldn't appear out of place at all.

Other than temporarily fearing I was going blind, I really enjoyed watching Hud again

"Damn! Is that a jellyfish out there?"

I can laugh at this now -- well, maybe grin nervously -- but it was quite a shock for me Saturday night when, right in the middle of watching Hud on my big-screen TV, I began to see what resembled a huge black jellyfish traipsing down a back road in the Texas Panhandle. (As I gawked at the black-and-white image, I couldn't help thinking: "Wait! Did I put some '50s sci-fi movie into the DVD player by accident?") I rubbed my eyes, then ran to the restroom and splashed water into them -- but when I came back, the jellyfish was still there, hovering above Paul Newman and Brandon De Wilde in a small-town bar. In fact, the jellyfish didn't disappear entirely for about 15 minutes. And even after it departed, I would occasionally see black flecks -- shaped a bit like feathers -- floating around my line of vision, suggesting that some large vulture might be molting somewhere above Melvyn Douglas' head.

The feathers made a few unwelcome reappearances throughout Sunday -- even while I worked on a couple of assignment for Cowboys & Indians, The Premiere Magazine of the West -- greatly amping my already considerable paranoia about my eyesight. (I've always been afraid of losing my vision -- and not just because, hey, there isn't much of a market for blind film critics.) So as soon as I could land an appointment today with my optometrist -- the lovely and talented Sheryl Pickering, O.D. -- I high-tailed it over to her office, where my eyeballs underwent a thorough going over, complete with ultrasound scanning.

So far, it looks like the problem isn't anything as serious as macular degeneration -- thank you, Jesus! -- but rather "floaters" caused by some deterioration of vitreous fluid. (This, I was told, is "part of the natural aging process," and I can't begin to tell you how happy I was to hear that.) Mind you, this can be a serious condition if it turns out that I have some kind of tear in my retina. But Dr. Pickering didn't see any sign of that -- and, trust me, she and her assistants looked, quite diligently, all the while demonstrating amazing patience while dealing with a crybaby wuss of a patient.

I'm set to go back for another check-up next month, by which time I may have grown accustomed to what I've been warned might be sporadic re-sightings of the floaters. (Nothing for the past few hours -- keeping my fingers crossed.) Right now, though, my dilated pupils have returned to normal size, I'm feeling much calmer -- or, to be more precise, considerably less hysterical -- and I'm ready to resume my normal workload tomorrow. (Even my cats appear to be in a better mood than they seemed this morning -- perhaps they'd heard me mumbling something to my son about my possible need for a seeing-eye dog.) Indeed, I'm functioning well enough to give my Art of Filmmaking students at Houston Community College their mid-term tonight after showing them a documentary about the making of Casablanca.

There have been several outstanding documentaries about Hurricane Katrina's devastating assault on New Orleans -- most notably, Spike Lee's epic When the Levees Broke -- and quite a few notable feature films and TV dramas about post-Katrina life in the Crescent City. But as far as I can tell, Eric Heisserer's ingeniously suspenseful Hours -- one of the very best films I saw this year at SXSW -- is the first significant dramatic feature set during the storm and its cataclysmic aftermath. You can read my Variety review here.

And speaking of my SXSW faves: The Retrieval, Chris Eska’s filmed-in-Texas Civil War-era drama about black freedmen pressed into service by white bounty hunters, is an outstanding example of regional indie filmmaking accomplished with limited resources and an abundance of skill. My Variety review is here.

Now for something completely different: Cheap Thrills is a thoroughly nasty piece of work, which doubtless will be the strongest selling point for this worst-case scenario about steadily escalating dares and degradations. My Variety review is here.

Reel life at SXSW: The Network and An Unreal Dream: The Michael Morton Story

Two of my favorite films at SXSW this year were nonfiction features. An Unreal Dream: The Michael Morton Story -- from Al Reinert, director of the Oscar-nominated For All Mankind -- is an illuminating and infuriating account of a luckless Texan who spent 25 years behind bars after being falsely convicted -- thanks, apparently, to prosecutorial misconduct -- for the murder of his wife. You can read my Variety review of this one here.

Meanwhile, off in Afghanistan, director Eva Orner -- producer of the Oscar-winning Taxi to the Dark Side -- examines the power of television to reflect and effect change in a society during an epochal period of transition in The Network. You can my review of that one here.

Be afraid, be very afraid, of The S from Hell

Director Rodney Ascher (Room 237) has confirmed my worst suspicions about the corporate logo that loomed large at the tail end of TV shows I viewed during my tragically misspent youth.

Email ThisBlogThis!Share to TwitterShare to FacebookShare to Pinterest
Labels: Room 237, Screen Gems, The S from Hell

Live from SXSW: When Angels Sing and Some Girl(s)

Harry Connick Jr., Willie Nelson, Lyle Lovett, Kris Kristofferson and Connie Britton (of TV's Nashville) are among the notables who figure prominently in When Angels Sing, an innocuously pleasant filmed-in-Austin drama having its world premiere at SXSW. You can read my Variety review here.

Also on tap at SXSW: Some Girl(s), director Daisy von Scherler Mayer's filmization of the controversial stage play by screenwriter-playwright Neil LaBute (In the Company of Men). You can read my review of that one here.

What's the Buzz? I'm on the radio at SXSW! 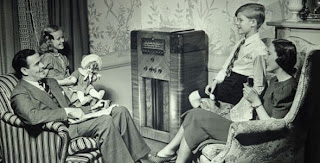 I will be a guest on Film Society's Daily Buzz with Eugene Hernandez out of SXSW at 9 pm CT Monday. You can listen live, or downstream later, by visiting the KUT radio station website here.
Posted by Joe Leydon at 3/11/2013 06:32:00 PM 1 comment:

Live from SXSW: The Incredible Burt Wonderstone and Evil Dead

Had a great time with The Incredible Burt Wonderstone, the unexpectedly nifty opening-night offering Friday at the SXSW Film Festival in Austin. (You can read my Variety review here.) Then I stuck around for the Evil Dead remake -- not quite so nifty, but bound to be a crowd-pleaser (provided the crowd is comprised of fans of the original 1981 shocker). You can read my Variety review of that one here.
Posted by Joe Leydon at 3/09/2013 04:23:00 PM No comments: 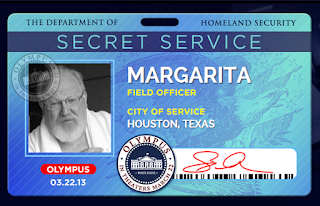 Hey, I'll drink to that. Now go ahead and generate your own -- with a little help from the folks promoting Olympus Has Fallen.

Tonight is the night: J.R. Ewing buys the farm on TNT's reboot of Dallas. Can't say I'm looking forward to his untimely demise -- but I know why the producers had to do it. And yes: I'll be watching.

Giant disappointment: When $28 million is not enough 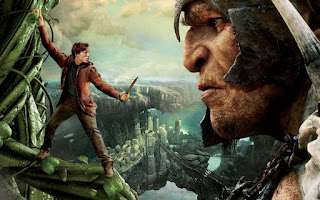 OK, I have to ask: Has Jack the Giant Slayer raised -- or, perhaps more appropriately, lowered -- the bar for what constitutes a flop? I mean, has any other movie posted bigger opening-weekend box-office numbers, and still been written off immediately as a disaster?

Postscript: Two esteemed colleagues have pointed out that John Carter, with a $30-million opening-weekend, actually was a bigger "instant flop." So there.


Not gonna lie: I was kinda-sorta traumatized during my misspent youth when I witnessed a humongous arachnid attack rock-'n-rollin' teens in Earth vs. The Spider. Indeed, I vaguely recall screaming out loud and running into the lobby of the theater during a matinee screening of that infamous '50s cheapie-creepie -- and refusing to be coaxed back inside the auditorium even after Revenge of Frankenstein, the second feature on the double bill, began.

Ever since then, I've had slight aversion -- to put it mildly -- to sci-fi flicks involving giant-sized bugs of any sort. And I don't think I'm alone in this regard. In fact, I'm absolutely convinced that Eight-Legged Freaks was a box-office under-achiever a few years ago because arachnophobia is much more widespread than the producers of that movie expected.

So why I am actually looking forward to seeing something called Big Ass Spider! next week at SXSW? Well, for openers, the above trailer makes it look like it'll be a laugh-out-loud hoot. And for another... Well, I  have the lede for my review already written: "In the grand tradition of Penn and Teller Get Killed, Harold & Kumar Escape from Guantanamo Bay and Death of a Salesman, Big Ass Spider! earns credit right from the get-go for truth in advertising."