The Halloween franchise: You still can't kill the bogeyman!


Way back in 2006, I took a look at all eight movies in the original Halloween movie series. Some folks say I never fully recovered from the experience. They may be right. In any event, here's what I wrote. Just keep telling yourself: It's only a blog post, it's only a blog post...
Posted by Joe Leydon at 10/31/2013 04:10:00 PM 28 comments: 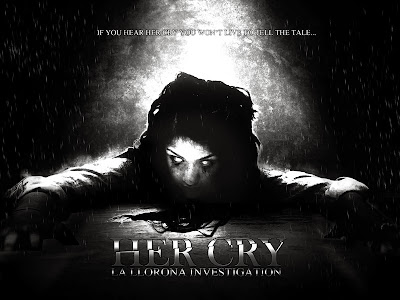 At 9 am CT Thursday, I'll join the lovely and talented Deborah Duncan on Great Day Houston to talk about scary movies -- like Rosemary's Baby, Halloween and Her Cry: La Llorona Investigation (pictured above) -- just in time for, well, Halloween.

Update: And here's how it turned out:

“Why don’t white people just leave the house when there’s a ghost in the house?” Good question. So good, in fact, it may have inspired an entire movie. 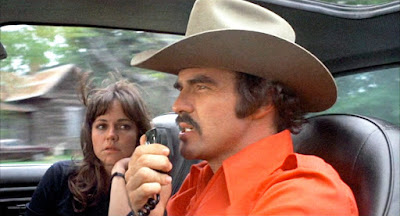 On the occasion of the passing of Hal Needham, here is a slightly revised version of a chapter from my 2004 book Joe Leydon's Guide to Essential Movies You Must See.

A textbook example of a hand-tooled star vehicle that forever labels the star in its driver’s seat, Smokey and the Bandit also is noteworthy for being the movie most often credited – or, perhaps more precisely, blamed – for kicking off an action-comedy subgenre best described as Cross-Country Demolition Derby.

Two lesser sequels and at least one long-running TV series (The Dukes of Hazzard) can be traced directly to this broadly played hodgepodge of high-speed driving, lowbrow humor and spectacular car crashes. But wait, there’s more: Smokey and the Bandit, the debut feature of stuntman-turned-filmmaker Hal Needham, also inspired literally dozens of other pedal-to-the-metal extravaganzas – mostly redneck melodramas and cornpone comedies, along with Needham’s own in-jokey Cannonball Run movies -- throughout the ’70s and ’80s. Decades later, its very title still serves as shorthand for a particular type of undemanding crowd-pleaser with smart-alecky heroes, dim-bulb authority figures and more high-octane action than a month of NASCAR events.

The thin plot is a serviceable excuse for stringing together scenes of cartoonish frivolity and vehicular misadventure. Bandit (Burt Reynolds), a swaggering prankster and maverick trucker, wagers that he can transport contraband beer from Texas to Georgia in record time. While a faithful friend (Jerry Reed) does much of the actual driving in the lager-stocked 18-wheeler, Bandit darts about in a souped-up Trans Am, on the lookout for any “Smokey” (i.e., highway cop) who might impede their high-speed progress.

Complications arise when Bandit arouses the ire of an especially grizzly Smokey, Sheriff Buford T. Justice (Jackie Gleason), by picking up a perky hitchhiker (Sally Field) who just happens to be the runaway bride of the sheriff’s cretinous son (Mike Henry).

Initially dismissed as a freakish regional hit at Deep South drive-ins, Smokey and the Bandit gradually proved equally popular in major metropolitan markets, and wound up in the record books as the second-highest grossing film (right behind Star Wars) of 1977. Some have credited its phenomenal popularity to its subversive allure as fantasy fulfillment: Bandit repeatedly outsmarts and humiliates Sheriff Justice and all other law-enforcement officials who dare to impinge on his God-given right to ignore any posted speed limit. (Some academic somewhere doubtless has earned a doctorate by explaining why so many pop tunes and popcorn flicks of the ’70s equated driving over 55 with all-American rebelliousness.) Most other observers, however, credit the movie’s appeal – for contemporary viewers as well as ’70s ticketbuyers -- to the once-in-a-lifetime matching of player and character.

Even moviegoers not yet born when Smokey and the Bandit first screeched into theaters reflexively think of the hard-driving, trash-talking trucker whenever they hear Reynolds’ name. Part of that can be explained by the virtually nonstop exposure of Needham’s movie on cable and home video. But it’s instructive to consider Reynolds’ own role in erasing the lines between actor and character, man and mythos.

In the wake of his becoming an “overnight success” after years of journeymen work in television and movies, Reynolds embraced typecasting – and tongue-in-cheeky self-promotion – with unseemly fervor. For the better part of a decade, he chronically reprised his Bandit shtick – winking insouciance, naughty-boy sarcasm, zero-cool self-assurance – in motion pictures and TV talk shows. It was funny, for a while, and then it wasn’t. Trouble is, by the time it stopped being funny, the image was firmly affixed in the public’s collective pop-culture consciousness. So much so, in fact, that even after demonstrating his versatility in a wide range of character roles -- most memorably, as the prideful porn-film director in Paul Thomas Anderson’s Boogie Nights (1997) – Reynolds appears destined to always be remembered best for one indelibly defining character.

On the other hand, there are far less pleasant ways for an actor to ensure his immortality. When asked about his enduring linkage to Bandit in 2003, more than a generation after playing the cocky trucker, Reynolds addressed the mixed blessing with typically self-effacing humor.

“I’m very flattered,” he said, “by how some people still respond to that character. I still have guys in Trans Ams pull up to me at stoplights and yell, ‘Dammit! You’re the reason I got this thing!’

“But I also remember a while back, when I was offering an acting seminar in Florida, that I was afraid they’d go over to the auto-racetrack looking for me, instead of the theater. And even when they did show up at the right place, I felt I should tell them: ‘Those of you who are wearing your racing gloves – take them off, we’re not going to need them, we’re going to talk about other things.’”

Of course, if the audience loves a character (and, better still, the actor playing that character) the character can get away with practically anything, even coming off as a bona fide egomaniac. Midway through Smokey and the Bandit, Reynolds recalled, “There’s a moment when Sally asks me, ‘What is it that you do best?’ And I say, ‘Show off.’ And she says, ‘Yeah, you do that well.’ At the time we made the film, I thought to myself, ‘If I can get that line out and they still like me – “they” being the audience – we’re home free.’ Because basically, that’s who (Bandit) was, what he was all about.” 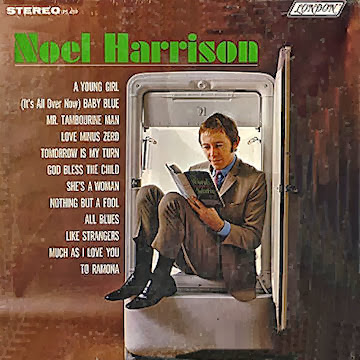 There was a time in the 1960s -- around the time he charted with "Suzanne," his affecting cover of Leonard Cohen's haunting ballad, and "The Windmills of Your Mind," the Oscar-winning theme of The Thomas Crown Affair -- when it looked like Noel Harrison was set for a lengthy stretch of pop-music stardom. Around that same time, when he fleetingly enjoyed prime-time exposure as co-star of The Girl from U.N.C.L.E., Harrison also appeared well-equipped to find frequent employment in movies and TV as a light-comic leading man. It can't be said that he fulfilled his early promise. On the other hand, there are those of us who will always remember him warmly for what he did accomplish before his death Saturday at age 79.

And yes, before you ask: I still have the above-pictured LP in my closet somewhere. Better still, I also have vinyl and digital recordings of these, too:

Coming soon (finally) to a theater near you: Costa-Gavras' Capital 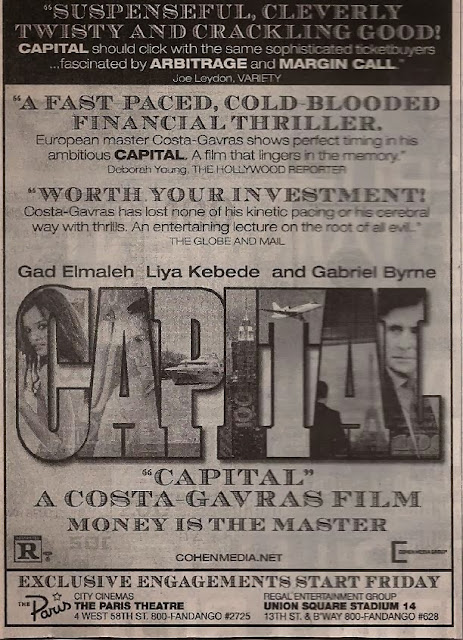 Glad to see Capital -- which I covered for Variety back at the 2012 Toronto Film Festival -- finally getting some theatrical exposure in the United States. (It opens Oct. 25 in New York, as you can see in the above NYT ad.) As I wrote in my original review, Costa-Gavras' slickly produced and sensationally effective thriller is "a persuasively detailed tale of boardroom politics, international banking, remorseless backstabbing and billion-dollar wheeling-and-dealing," focused on the "the sudden rise and relentless plotting of Marc Tourneuil (Gad Elmaleh), a hard-driven up-and-comer who becomes CEO of France’s (fictional) Phenix Bank after his predecessor suffers a heart attack on the golf course."

As the gladhanding but hot-tempered head of a U.S. hedge fund with a large stake in Phenix, Gabriel Byrne is in fine form, devouring huge swaths of scenery with uninhibited relish. As for lead player Elmaleh... Well, to again quote my Variety review, "[I]t will be interesting to see how many U.S. critics comment on Elmaleh’s physical resemblance to Rick Santorum, and how many will insist [Capital] echoes sentiments expressed in Mitt Romney’s notorious '47%' comments."

Take a look at this trailer, and you'll see what I mean: 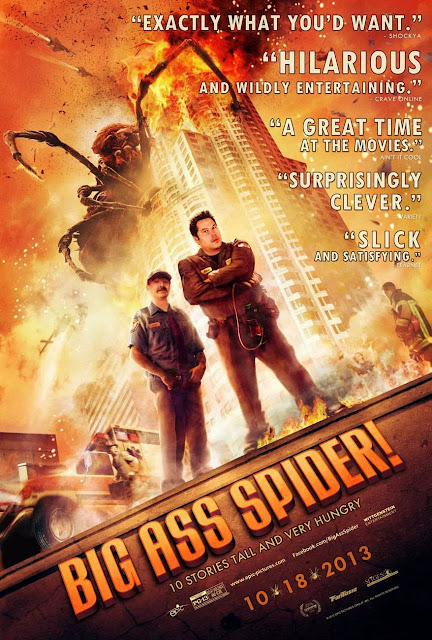 So what have I been up to elsewhere this month? Glad you asked:

Forgetting the Girl -- My Variety review of  the indie thriller that impressed me last year at WorldFest/Houston International Film Festival. Unfortunately, I was far less impressed by the filmed-in-Texas Red Wing.

2013 Houston Cinema Arts Festival -- Coming soon to an H-Town venue near you. Read all about it here. And here.

Muscle Shoals -- Greg Camalier's fascinating documentary about making music in the eponymous Alabama town where, hey, maybe's there's something special in the air that enhances artistry.

Lost for Words -- Another indie from another WorldFest/Houston International Film Festival. 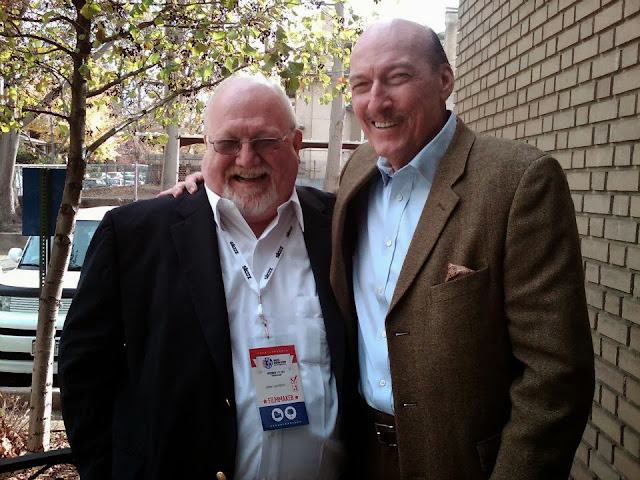 Among the most pleasant experiences I have enjoyed in recent years was a long, leisurely lunch with Ed Lauter, one of my all-time-favorite character actors, last November at the Starz Denver Film Festival. For the better part of two hours before we engaged in an on-stage, post-screening Q&A after the Denver Fest premiere of Ed Burns' delightful The Fitzgerald Family Christmas, we chatted about the highlights of our respective careers -- and he was graciously polite enough to indicate he found my anecdotes almost as interesting as his.

Mind you, it wasn't like we were in any sort of "Can you top this?" competition. Because, really, what could I possibly say that could top his account of being cast by Alfred Hitchcock in Family Plot after The Master of Suspense spotted him in The Longest Yard ? Lauter impressed Hitchcock so much that he was set to co-star in The Short Night, Hitchcock's next film -- the film, alas, Hitchcock didn't live to make.

Lauter passed away Wednesday at age 74, leaving behind a body of work that ranges from The Magnificent Seven Ride! (1972) and French Connection II (1975) to The Artist (2011) and Trouble With the Curve (2012). "When I first started out,” he said in Denver, “I always thought, ‘Oh, I want to work with this great actor, or that great director.’ All these wonderful dinosaurs. Well, now I’ve become one of those dinosaurs, I guess.” I would be a liar if I didn't admit I felt immensely flattered when he told me that, because I'd singled him out for special praise in my Variety review of Fitzgerald Family Christmas, I'd helped get him "back in the game." I just wish he'd stuck around to play a little longer.

Even if Charlie Hunnam is out of 50 Shades, you can still see his sex scenes in this one

Plus, you can see his Sons of Anarchy co-star in drag... and Mr. Big in a jockstrap... in Frankie Go Boom. 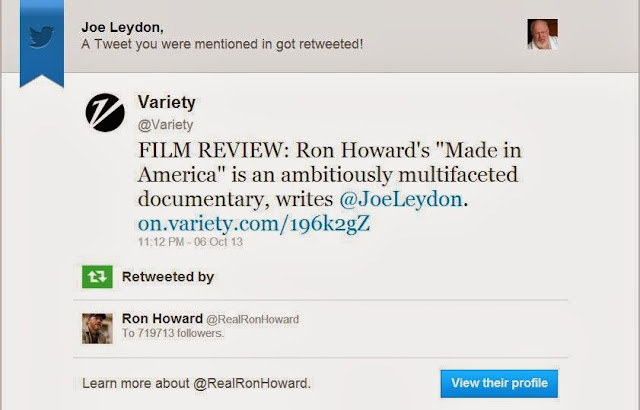 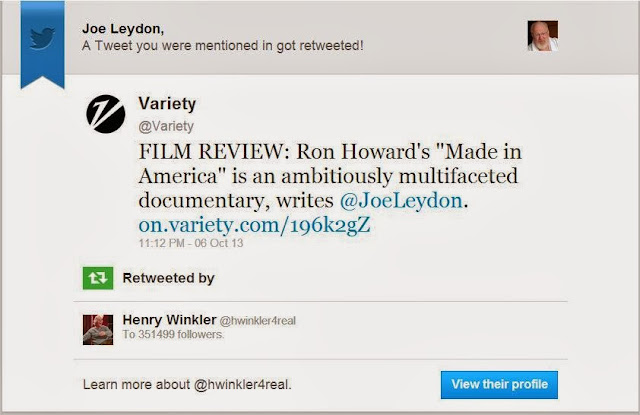