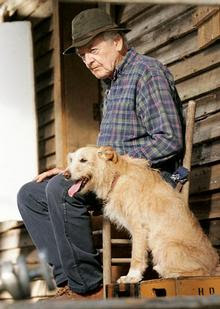 An exceptionally fine example of regional indie filmmaking, That Evening Sun deserves savvy handling by a venturesome distributor to maximize its potential to attract audiences and win prizes. When I recently viewed this deliberately paced, richly atmospheric drama -- which won the Audience Award for Best Dramatic Feature, and a Special Jury Prize for Ensemble Cast, at last week's SXSW Film Festival in Austin -- I marveled at Hal Holbrook's career-highlight star turn as an irascible octogenarian farmer who will not go gentle into that good night, a vividly detailed yet subtly rendered performance that could generate serious heat in races for various year-end accolades. You can read my Variety review here. And if you missed it at SXSW, you catch writer-director Scott Teems' filmed-in-Tennessee production next month at, appropriately enough, the Nashville Film Festival.
Posted by Joe Leydon at 3/26/2009 10:20:00 PM

Joe, thanks for the great write up. We are proud of the strong Tennessee connections and are thrilled to screen that Evening Sun at the 40th annual Nashville Film Festival on Saturday and Sunday, April 18 & 19. Many of the cast will be here to walk the red carpet and Dixie Carter will receive the Governor's Award on Saturday night. We are even more excited about you being here. It wouldn't be the same not seeing you running in and out of the theaters, catching as many films as you can. And I would miss our great conversations in the VIP Tent as we toast to great films. See you soon, Joe. Sallie
(Executive Director, Nashville Film Festival)