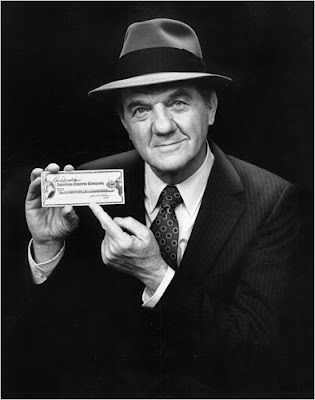 As Robert Berkvist of the New York Times astutely notes, Karl Malden "was perhaps the ideal Everyman. He realized early on that he lacked the physical attributes of a leading man; he often joked about his blunt features, particularly his crooked, bulbous nose, which he had broken several times while playing basketball in school. But he was, he once said, determined 'to be No. 1 in the No. 2 parts I was destined to get.'"

In achieving that goal, A.O. Scott adds, Malden "defined what it meant to be a character actor" as he "specialized in being uneasy, playing men who are variously worried, angry, disappointed and defeated. Like many other actors who distinguish themselves in supporting roles and whose charisma consists of a kind of intensified ordinariness, he has often been referred to as an everyman. That doesn’t seem quite right, though. In his best movie roles, mainly in films directed by Eliza Kazan" -- including A Streetcar Named Desire, for which he earned an Oscar as, naturally, Best Supporting Actor -- "Mr. Malden is specifically the other man, the guy defined partly by his lack of certain attributes abundantly present in the protagonist. The other man is never ruthless, or dangerous, or dashing, or cool. His regret may be that he could never have been a contender, but he makes up for it with a stoical sincerity that is all the more affecting for being so easy to discount."
Like many other character actors who have garnered fame and acclaim in movies, Malden didn't achieve full-blown stardom until he turned to television -- as a hard-boiled but good-hearted veteran cop in The Streets of San Francisco (where he served, on camera and off, as a mentor to co-star Michael Douglas), a blunt-spoken steel-mill worker and family man in the unjustly overlooked Skag, and, of course, the sharp-dressed pitchman for traveler's checks and credit cards you should never leave home without. But no matter the size of the role, or the medium in which he played it, Malden invariably came across as effortlessly and absolutely convincing. Even when he went over the top in two '60s spy-guy extravaganzas -- Murderer's Row (1966), which cast him as a wild-eyed Dr. Evil type opposite Dean Martin's Matt Helm, and Billion Dollar Brain (1967), where he played the embezzling underling of a zealously right-wing Texas zillionaire thwarted by Michael Caine's Harry Palmer -- he somehow managed to maintain a modicum of credibility. That, too, is a hallmark of a natural-born character actor.
Posted by Joe Leydon at 7/02/2009 01:03:00 PM