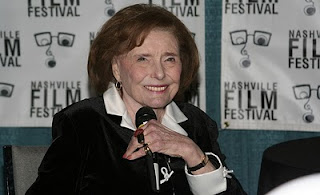 As a long-time admirer of Patricia Neal’s accomplishments as an actor and courage as a survivor – and, yes, as someone whose early adolescent lust was inflamed by the cynically bemused sensuality she casually conveyed in Hud

– I’m more than a little melancholy today as I contemplate the news of her death.

Our paths crossed only twice, most recently at the 2008 Nashville Film Festival, where Neal – who grew up in Knoxville, Tennessee – was given the festival’s inaugural Lifetime Achievement Award. It was my privilege and honor to conduct an on-stage Q&A with her after she received the award from no less a notable than Lyle Lovett, her co-star in Robert Altman’s Cookie’s Fortune (1999), and I found myself just as starstruck as her many fans in the sold-out theater as she addressed, with equal measures of wit, grace and frankness, questions about her favorite movies and movie roles, her tumultuous (and adulterous) affair with Gary Cooper, her 30-year marriage to author Roald Dahl and, of course, her arduous and near-miraculous recovery from the three massive strokes she suffered in 1965.

Neal was every bit as candid 25 years earlier when, while in H-Town to address The Women’s Institute, she agreed to a tête-à-tête in the Memorial City area home of her hosts.

At the time, she was still processing the bad news of her then-impending divorce from Dahl, who had taken charge of her physical and emotional rehabilitation following her strokes, helped her relearn how to walk and talk – and then drifted into an affair with one of her friends, Felicity Crosland, whom he eventually married shortly after the divorce.

Although she wore a bright smile for me while we were introduced – which, naturally, immediately made me think about her performance in Hud, though I managed to behave myself during our conversation – her laughter sounded more rueful than merry. She was too polite to refuse an interview, but too honest to disguise her feelings while we spoke.

If memory serves me correctly, it was she, not me, who brought up Gary Cooper, and the affair that began while they were making The Fountainhead

(1949). “I loved Gary Cooper, for years and years and years,” Neal said, her lips curving into a wistful smile. “And I still love him. Of course, Becky (Cooper’s wife, Veronica Balfe) was not very happy with me. And I don’t blame her. Nor was her little daughter, Maria, who I guess was about 11 when we started.

“They were very angry with me. And Maria, I remember – when she was very young, she spat on the ground when she saw me. And I was very sorry. But Gary… I just loved Gary very much.”

So much, in fact, that she suffered a nervous collapse when the affair ended. To recover, she moved from Hollywood back to New York, where playwright Lillian Hellman introduced her to British author Roald Dahl. Within a year, they were married.

Alas, they did not live happily ever after.

Throughout the 1950s and early ‘60s, Neal appeared prominently in such popular pictures as Operation Pacific

(opposite John Wayne), The Day the Earth Stood Still

(where she got to say the immortal words, “Gort! Klaatu barada nikto!”), A Face in the Crowd

. And yet, as she admitted when we spoke in 1983, it often seemed like, for every triumph she had on stage or screen, she had a counterbalancing pain in her private life.

Eight years after she married Dahl, Theo, their son, suffered severe brain damage after his buggy was crushed between a taxi and a bus when he was four months old. He lived, but only after several operations. Another child, a daughter named Olivia, died when she was seven, the victim of measles encephalitis. Her husband, Neal said, nearly went mad with sorrow. She supported him. Then, in February 1965, he had to repay her in kind.

Neal suffered three massive strokes during the filming of John Ford’s Seven Women. She was in her rented home, bathing her daughter Tessa, when, without warning, she was racked with a blinding pain. Somehow, she managed to stagger to the bedroom where her husband was resting.

“Suddenly, somehow, in that instant, I knew for certain, beyond any shadow of doubt, that somewhere inside her skull, Pat was hemorrhaging,” Dahl later wrote in a magazine article. “I felt deathly afraid.”

Neal could not even feel fear. The stroke left her confused, paralyzed, partially blind, unable to read, speak or walk. Fortuitously, even though Neal was three months pregnant when stricken, the baby she was carrying was not harmed. Lucy, another daughter, was born a normal child. By that time, Neal herself was on the road to recovery.

Dahl took it upon himself to more or less bully his wife out of a death-wishing funk and back to normalcy, improvising a form of physical therapy to keep her constantly occupied. Their ordeal and ultimate victory was the sort of real-life drama that, during the 1980s, was well-nigh irresistible to the makers of TV-movies. And so, inevitably, there was a well-received 1981 production titled The Patricia Neal Story, with Glenda Jackson in the title role and Dirk Bogarde as Dahl.

While recuperating, Neal had to pass on an offer to play Mrs. Robinson  in The Graduate

-- a part that went to Anne Bacncroft, who, ironically, had replaced her in Seven Women.) By 1969, however, she had sufficiently recovered to star in the film version of The Subject Was Roses

, Frank D. Gilroy’s Pulitzer Prize-winning play. But she needed a great deal of preparation, and quite a lot of intense encouragement from Dahl, before she was ready to face the demands of her comeback role as a ‘40s housewife who serves as peacemaker between her insensitive husband (Jack Albertson) and their returning G.I. son (Martin Sheen).

“I really worked on that for months and months and months,” Neal recalled. “That big speech, on the roof – the director kept saying he wasn’t going to do it. But finally, of course, he did. He was kind enough to put it on a teleprompter so I could look at it if I needed to. And that was good.”

Neal picked up an Oscar nomination for her performance in The Subject Was Roses, and continued to work sporadically in films and TV unless last year, when she appeared in the made-for-cable movie Flying By

as, no kidding, Billy Ray Cyrus’ mom. (At the Nashville Festival, I told her that kinda-sorta made her Hannah Montana’s grandmother – and she laughed out loud.) She wanted to work more often – “I’ve lost a lot of other things,” she said in 1983, “but not my talent!” – but didn’t waste much time feeling sorry for herself during extended periods between job offers. She wrote a best-selling autobiography, served as a spokesperson and fundraiser for several causes (including the Patricia Neal Rehabilitation Center in Knoxville), did voiceovers and on-screen sales pitches in TV commercials. In short, she remained as active as she could, until she couldn’t.

Now she is at peace. And thanks to Hud, A Face in the Crowd, The Day The Earth Stood Still and handful of other classics, she will remain immortal. 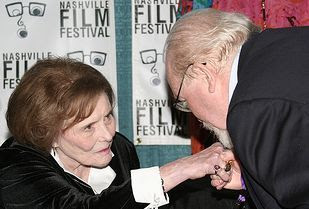 Email ThisBlogThis!Share to TwitterShare to FacebookShare to Pinterest
Labels: "A Face in the Crowd", "The Day the Earth Stood Still", "The Graduate", Gary Cooper, Nashville Film Festival, Patricia Neal