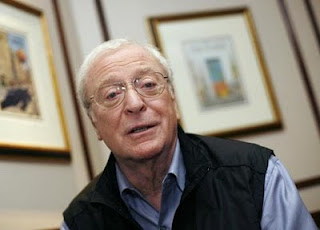 In recent days, Sir Michael Caine has ignited a firestorm of controversy by telling a British radio interviewer that, back in 1955, as his 56-year-old father lay dying of liver cancer in a London hospital, he asked his dad’s doctor to cut short his suffering.

“I was in such anguish over the pain he was in,” Caine told radio host Nick Ferrari in a taped interview that aired Saturday night, “that I said to this doctor, I said, 'Isn't there anything else you could... just give him an overdose and end this?’ Because I wanted him to go.

The Telegraph newspaper of Great Britain reported Saturday that, as news of Caine’s comments circulated in the British press prior to the radio broadcast, anti-euthanasia campaigners were quick to criticize the veteran actor. (In an on-line comments section, one angry Telegraph reader demanded that Caine be arrested, and his knighthood revoked.) And as the story continues to gain traction – it even appeared as a Page 2A news tidbit in Sunday’s Houston Chronicle – the firestorm doubtless will spread worldwide as Caine’s words are disseminated through bloggers, newswires and websites.

But here’s the really odd part: This is, quite literally, old news. Really: Caine wrote about his father’s suffering and death way back in 1992, in his best-selling autobiography titled What’s It All About?

If you happen to have a paperback copy of the book on a shelf somewhere, take it down and turn to page 94:

“I visited my father for two days, during which time his condition deteriorated rapidly. He was in excruciating pain. I asked the doctor to increase my father’s drugs and he told me that a larger dose would kill him. I looked at him for a moment and said, ‘If this is living, can death be such a bad thing?’ He thought for a moment, then asked me to go away and come back at eleven o’clock that night. I was back there at eleven on the dot. Dad seemed to be much more comfortable now and I sat there holding his hand for an hour or two. He didn’t seem to know that I was there but occasionally he would squeeze my hand and I would squeeze back. The hospital is right opposite the Houses of Parliament, and I could see Big Ben across the river. Eventually it struck one o’clock, and as it did, my father’s eyes opened slightly and he whispered, ‘Good luck, son,’ and died.


“I told the doctor that he had gone and thanked him for all that he had done, and walked back down the corridor…”


Even though I have never – thank God – been in a position similar to Caine’s, I was deeply and profoundly affected when I read this. So much so that, ten years later, I made a special point of complimenting Caine – for his blunt-spoken honesty as well as his expertise as a wordsmith – when we briefly discussed the episode he had written about so movingly.

We were in Austin at the time, while he was on location filming Second-Hand Lions

, and I was interviewing him for the New York Daily News. Mind you, we did not spend a lot of time on this subject. Indeed, I wound up not referencing it at all in the article I eventually wrote, partly because it had nothing to do with the primary focus of the piece – the story was about the upcoming release of The Quiet American

, and its possible reception in post-9/11 America -- and partly because, well, his autobiography had come out a decade earlier, and I figured the story was, as I said, old news.

But now Caine, inadvertently or otherwise, has invited closer scrutiny of the incident. And by doing so, he has made himself the target of criticism by those who feel what he did – or at least encouraged – is something on the order of mercy killing. Once again, it seems, the professionally outraged will have their say.

What's there to bitch about?? If I had been in a similar situation, I would have done the exact same thing.

The night my father died from cancer, he was throwing up blood for NINETEEN HOURS. Think about that. About holding one of those tiny hospital containers up to his mouth, emptying it, the smell (like beef broth), wiping blood off his chest when he got too delirious to aim and it just bubbled out of him. Everyone was waiting for him to die. The doctors said there was nothing more to be done. So why not overdose him on morphine? It would have been so much easier for him and for his family, particularly his 87-year-old mother. It would have been merciful, and I certainly don't have a problem with anyone lucky enough to have a doctor willing to help.

I'm with Caine on this one. When my Dad was on his death bed, dying of lung cancer and in pain despite the meds, I had to ask the doctor to increase the dosage. It wasn't as though he was going to recover at that point and there was no reason for him to suffer any more than he had to.
Those who claim outrage have probably never had a loved on in that situation.

Fortunately my father's passing was, for the most part, peaceful.

It's funny how some people know exactly how other people should behave.

Not that he needs it, but I support Mr. Caine on this.