Remembering Snow White -- and the woman who gave her a voice

, arguably one of the most influential and undeniably one of the most enchanting movies ever made. By now, it’s become so indelibly etched on our collective pop-culture consciousness that it may be hard, if not impossible, to imagine a world without it. But consider this: At the time of its production, it was considered by many to be Uncle Walt’s folly, because conventional wisdom dictated that audiences simply wouldn’t have the patience – or even the desire – to sit through a feature-length cartoon.

Fortunately for all of us, this was one Mickey Mouse notion that Disney chose to reject.

Still magical after all these decades, Snow White is best enjoyed in a spacious movie theater with Dolby Stereo, or a comfy den with a world-class home theater system, alongside as many children as you can reasonably corral. But if you can’t find any kids to watch it with, don’t let that stop you: Do yourself a favor and enjoy it on your own.

What’s that? You say you’re too old for fairy tales? Well, that’s a shame. But, OK, be that way: You can still admire Disney’s Snow White for its sheer technique. In terms of depth, detail and delicate play of light and shadow, the supple artistry of this must-see movie has seldom been equaled, even in an era of computer-generated imagery.

A few sequences are simply unforgettable: Snow White, racing through a shadow-streaked forest, sees threatening alligators in floating branches and wild-eyed monsters in rotting tree trunks. The Wicked Queen, transformed into a cackling crone, drifts through the gray fog of a pale dawn on her mission of murder. The height-challenged yet ever-hearty Seven Dwarfs, alerted at their mine by anxious forest animals, race back to their cottage to save Snow White while, thanks to crosscutting worthy of D.W. Griffith, we see our heroine being offered The Poisoned Apple.

Show Snow White to children of an impressionable age, and they’ll never be satisfied with the corner-cutting animation on view in reruns of ‘60s and ‘70s TV cartoon shows. See it yourself, and you’ll be reminded of the hand-made impressionistic beauty that prospered under Uncle Walt, long before animators at Disney and elsewhere discovered the magic of CGI. Indeed, the animation is so effective in Snow White that very small youngsters may be frightened by some scenes, especially when The Fairest of Them All runs through the seemingly haunted woods.

Granted, there’s not much even the Disney animators can do to make Prince Charming appear anything but white-bread bland. (It always requires a leap of faith to believe that Snow White, or any other animated heroine, could ever live happily ever after with such a stiff.) On the other hand, it’s not entirely the poor hero’s fault: The Dwarfs -- Doc, Grumpy, Sleepy, Dopey, Happy, Sneezy and Bashful -- upstage everybody, even the radiant heroine, with highly individualized personalities that are the byproducts of meticulously detailed artistry.

Nitpickers have a point when they complain that this precedent-setting classic – the mother of all animated movies -- firmly established the convention of stuffing a slew of “original songs” into almost every Disney or non-Disney animated feature. Still, even Grumpy would have to agree that the wall-to-wall musical score in Snow White is cheerily pleasant, with some songs (“Whistle While You Work,” “Heigh-Ho” and “I'm Wishing”) as endearing and immortal as the movie that introduced them. And if you can remain dry-eyed throughout the climactic rendition of “Someday My Prince Will Come,” well, you’re made of sterner stuff than this grumpy film critic.

By the way: Have I ever told you that I once met the real Snow White?

No, don’t worry, I haven’t been sampling some of Dopey’s private stash. There was a time when the folks at Walt Disney Productions would periodically re-release their animated classics in theaters and drive-ins everywhere. And whenever it was time to reissue Snow White, they’d usually book a promotional tour for Adriana Caselotti – the singer-actress who provided the sweetly trilling voice for the fairest princess of them all. Which is why, back in 1983, while I was film critic for The Houston Post, I had opportunity to dine and dialogue with Caselotti over lunch at Brennan’s Restaurant.

Better still, I had the honor of my own private serenade: As I approached her table, she greeted me an impossibly sweet rendition of – yes, you guessed it! – “Someday My Prince Will Come.”

By that time, Snow White had already outlived its creator -- Walt Disney died in 1966 -- and many of the dedicated artists who drew the enchanting fairy tale more than four decades earlier. But Caselotti was still around, still vivacious and loquacious. And even though she never really had a showbiz career after Snow White, she was willing – nay, extremely eager -- to share anecdotes about her animated alter ego whenever the Disney studio would send her out on the road.

She was home with her father, Guido Caselotti, an Italian-born, Los Angeles-based vocal coach, when Disney casting director Roy Scott phoned Mr. Caselotti in 1935. Scott was seeking someone with a child-like singing voice for an upcoming cartoon project. (Deanna Durbin, just before starting her movie career at Universal, was briefly considered for the job, but rejected because she sounded too mature.) Did Mr. Caselotti, by any chance, know of someone who might fit the bill?

“I was listening in on the extension phone,'' Caselotti remembered. ''And I said, 'Papa, what about me?’”

Papa Caselotti told his daughter to get off the line. But by then it was too late -- Scott was intrigued by her girlish voice, and asked young Adriana to come by the studio for an audition.

So she did just that. Some 150 other girls also were considered for the job. But after repeated tests, everyone at the studio -- even Uncle Walt -- agreed Caselotti was the perfect choice.

Caselotti recalled Walt Disney as “a very natural, down-to-earth fellow. When you first met him, he didn't even want you to know he was Walt Disney. He wanted you to relax, I think.”

There was only one problem: Disney repeatedly stressed he wanted a Snow White who sounded all of 14 years old. When the time came to actually record voices for the film, however, Caselotti was 18.

“So I didn't tell anyone my age,” she says. “Whenever they called at home, I answered in my little girl voice, the voice of Snow White. It's not my normal voice. I had to push it up, to get that never-never-land quality Mr. Disney was looking for. It was easy for me to do, because of my operatic training.

“Actually, I worked very few days on the picture. All the dialogue and musical portions were done in a rather short period of time. Then there was a little dubbing to do after the animation was finished.

“But I have always felt very much a part of the Disney family -- even though I probably didn't work at the studio for more than a week or two.”

Adrianna Caselotti died in 1997, at age 80. As I indicated earlier, she didn’t do much of note as a professional performer after providing the singing and speaking voice for Snow White. But, really, what more need a person do to ensure herself some degree of immortality? 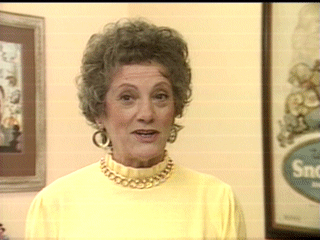 "Show Snow White to children of an impressionable age, and they’ll never be satisfied with the corner-cutting animation on view in reruns of ‘60s and ‘70s TV cartoon shows."

Or the virtually non-existent animation of "Family Guy".