Saturday at MFAH: Do the Right Thing -- still a hot topic 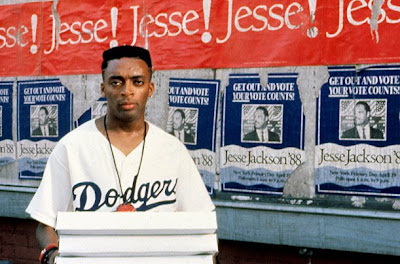 But wait, there's more: As early as May that year, when Do the Right Thing had its world premiere at the Cannes Film Festival, some journalists actually were questioning whether Lee had acted irresponsibly by making a movie with such a such a "hopeless" view of then-contemporary race relations in America.

Not surprisingly, Lee begged to differ with that characterization of his masterwork.

''I don't think this is a pessimistic film,'' Lee said during a Cannes press conference. ''I think that, at the end, there is hope.

''What I feel I have to do as a filmmaker is present a problem, so that discussion can start. Because you still have a lot of people in America who say that racism ended when Lyndon B. Johnson signed the Civil Rights Act, and black people have the vote . . . So black people have arrived, and everything is all right.

''But it's not. The black underclass in America now is larger than it's ever been. So you can't be lulled to sleep, into thinking that just because Eddie Murphy is huge, and Arsenio Hall has a great TV show, that we're living in a world where everything is right, and righteous and humane.''

Twenty-three years later, Do the Right Thing remains a powerful and provocative film. And part of the reason for that is, 23 years later, even after the re-election of our first African-American vice-president, we're still having heated discussions about the things that divide us -- and the things that unite us. I'll be introducing a retrospective screening of this remarkable "Spike Lee Joint" at 7 pm Saturday at the Museum of Fie Arts, Houston. Like Lee, I don't claim to have all the answers. But I do have one or two stories to tell about this movie and the man who made it.
Posted by Joe Leydon at 2/08/2013 03:36:00 PM

Email ThisBlogThis!Share to TwitterShare to FacebookShare to Pinterest
Labels: Do the Right Thing, Museum of Fine Arts Houston, Spike Lee