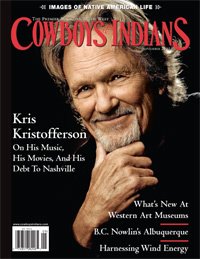 For over four decades, Kris Kristofferson has loomed large in the pop culture firmament as both a renowned singer-songwriter and an acclaimed film actor. Even now, at the ripe young age of 75, he continues to impress and entertain with his performances on concert stages and in motion pictures. So I considered it a rare privilege and honor to interview him for the September issue of Cowboys & Indians, The Premier Magazine of the West.

On the day after he received the prestigious Career Achievement Award at the Nashville Film Festival last April, Kristofferson sat down with me to reminisce about working with country music greats who became close friends – including Johnny Cash, Willie Nelson and Waylon Jennings – and acting for filmmakers as diverse as Sam Peckinpah, Shane Dax Taylor (director of Kristofferson’s latest film, the moody drama Bloodworth

--  the best advice he's ever received as an actor. “When I read the script for Alice,” he says, “I really didn’t know if I was up to the guy. I felt I didn’t have the acting experience – just the mechanics of it -- that probably was necessary. But when I got the job, Marty said something to me that was one of the most helpful things that a director ever told me. He said, ‘Don’t worry about what it says in the script when it says, “He says sternly,” or something like that. Just go through and cross out all of the directorial comments and just leave the dialogue. And figure how you would say that – how you would react to that.’ And that changed everything for me.”

You can read more of what Kristofferson had to say during our chat here. And you can read a web-only sidebar about some of his Western movies here.
Posted by Joe Leydon at 8/09/2011 04:28:00 PM