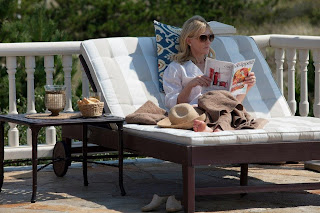 Just in case you missed it:

Instructions Not Included : Judging from remarks on the comment thread for this one, my take on Eugenio Derbez's mawkish dramedy was not a popular one. Hey, what can I say? I'm a critic, not a pollster. Must admit, though: I find it amusing that, whenever I say less than complimentary things about a film made by anyone who isn't a Caucasian male, some people automatically assume I must be a conservative. Or, worse, a Republican. Come to think of it, my less-than-favorable review of Lee Daniels' The Butler generated a similar response.

Furthermore: Didn't think much of either I Declare War or Savannah. On the other hand: I thoroughly enjoyed Blue Jasmine (featuring Cate Blanchett, pictured above) and In a World..., and had an absolute blast talking with the wild and crazy guys who made The World's End. And I highly recommend Herblock: The Black & the White -- a warmly celebratory documentary about the Pulitzer Prize-winning editorial cartoonist -- as a film well worth tracking down and checking out.