Words of wisdom from John Cassavetes: “You know, in this business, it's all jealousy.” 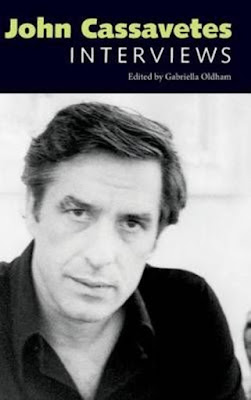 Jeffrey Wells posted an interesting commentary today over at Hollywood Elsewhere, postulating that Hollywood major players are far less supportive of their fellow filmmakers than their counterparts, past and present, in other countries. And got me to thinking about something the late, great John Cassavetes told me way during an interview way back in 1985. You can read the entire article I gleaned from our conversation in Gabriella Oldhman’s exceptional anthology John Cassavetes: Interviews, recently published by the University Press of Mississippi. (Mind you, I’m not saying it’s exceptional simply because she included something written by me — but, hey, that didn’t hurt.) This particular segment, however, I feel is especially relevant in light of Wells’ observation:

So, at 55, John Cassavetes is still a maverick, eh?

The question elicits a melancholy smile. Cassavetes stares at his soft drink for a moment as he calmly considers his answer. “People used to love to call me a maverick, because I had a big mouth, and I’d say, ‘That bum!’ or something like that when I was young. Mainly, because I believed it, and I didn’t know there was anybody’s pain connected to the business. I was so young, I didn't feel any pain. I just thought, ‘Why don’t they do some exciting, venturesome things? Why are they just sitting there, doing these dull pictures that have already been done many, many times, and calling them exciting? That's a lie — they're not exciting. Exciting is an experiment.’

His words trail off into weak laughter.

“That reputation keeps with you, through the years. Once the press calls you a maverick, it stays in their files. I’ll be dead five years, and they'll still be saying, ‘That maverick son-of-a-bitch, he's off in Colorado, making a movie. As if they really cared.

“You know, in this business, it's all jealousy. I mean, this is the dumbest business I’ve ever seen in my life. If somebody gets married, they say, ‘It’ll never work.’ If somebody gets divorced, they say, ‘Good. I'll give you my lawyer.’ If somebody loses a job, everyone will call him -- to gloat. They’ll discuss it, they’ll be happy, they’ll have parties. I don't understand how people that can see each other all the time, and be friends, can be so happy about each other’s demise.

“I think people, studio executives and filmmakers, should hate each other openly, and save a lot of trouble. It’s like me and actors. I never get along with actors, not on the level of friendship, because I don't believe in it. Only on a creative level. Now, through a period of years, Peter Falk and I have become very good friends, as have Ben Gazzara and I. But only after a period of years. That friendship came out of working on Husbands together, and the success that came out of that. And a lot of other films, too. Sometimes, we’ve been successful, and sometimes we've been unsuccessful. I mean, the creative part of it has always been successful. That’s been the bargain of it, our relationship.

“But I’m sure that, the moment I was no longer interested in anything artistic, Peter would not be my friend anymore. And that would be fair game. I probably wouldn’t be his friend, either, if I weren’t interested in art.”
Posted by Joe Leydon at 10/22/2016 04:02:00 PM