My 1988 conversation with Jonathan Demme 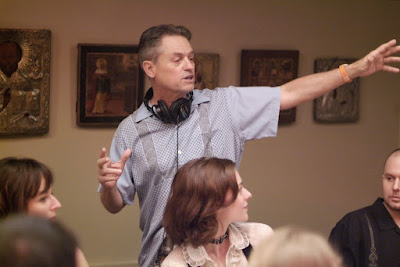 As a tribute to filmmaker Jonathan Demme, who passed away today at age 73, I am posting this interview I did with him back in 1988, shortly before the release of Married to the Mob. I was grateful for the opportunity to speak with him — I had pegged him as a promising director  when I saw Fighting Mad (1976), and subsequently enjoyed seeing that promise fulfilled in Citizens Band (1977) and Melvin and Howard (1980). My only regret is that our paths never crossed again.

The cinema of Jonathan Demme is a vibrantly colored patchwork quilt where the rural Middle Americans of Fighting Mad enjoy Sunday chicken dinner, where the Utah Mormons of Melvin and Howard cling fast to dreams fed by pop culture, where the funky reggae princess of Married to the Mob hires the widow of a Long Island Mafioso to work in a Lower East Side beauty shop.

Demme works in riots of color and freeze-frames of eccentric details, insisting on the importance of what lies at the edges of his frame and the fringes of our society. And he will not be boxed in by fashion or genre. As a filmmaker, his enthusiasm is as boundless and indefatigable. He will focus on a one-man show (Swimming to Cambodia) that's large enough to contain multitudes, then pull back to encompass the curves and twists of a romantic road movie (Something Wild) that detours into harrowing violence. He can stalk David Byrne and the Talking Heads all around a concert stage (Stop Making Sense), or scramble along the highways, and smash through the defenses, that separate small-town folks who are connected only by their C.B.’s (Citizens Band, a.k.a. Handle with Care).

Call him Demme eclectic and he will smile, grateful for the compliment.

A 44-year-old graduate of producer Roger Corman’s school of low-budget, fast-profit moviemaking, Demme knows how to grab an audience. “Rule No. 1,” he says, quoting his mentor, “is to never forget that the eyeball is the primary organ involved in the experience of movie watching. And if you don’t keep the eye stimulated, there’s no way you can keep the brain engaged.

“Of course, Roger said this before the advent of stereo sound, so I guess the ear is almost as important now. But that's OK. I’ve always liked to play special effects louder than they should be, because they’re fun that way. Whether it’s a burp, or a knuckle crack, or a punch — it’s just more fun to hear it loud and crisp, not at the realistic level.”

But if you take a close look at Demme’s labors of love — the “Sun City” video of Artists United Against Apartheid, an "impressionistic documentary” called Haiti Dreams of Democracy — you realize there's more than sound and fury to his sensibility.

Along with Martin Scorsese and Danny De Vito, Demme recently established Filmmakers United Against Apartheid, a group of more than 100 filmmakers who want to involve their films in the cultural boycott of South Africa. And even in a frankly commercial project like his latest film, Married to the Mob, a darkly humorous romantic comedy about a Mafia widow and a straight-arrow FBI agent, Demme projects his optimistic view of America as a richly multi-ethnic society, a percolating melting pot where white bread can soak up tasty foreign influences.

“In this day and age, with so much strife, any opportunity to visualize cooperation between people who are different is an opportunity that can’t be missed,” Demme said a few days ago in his Plaza Hotel suite.

“I get mad at a lot of movies that have the same old white-bread America in the background of the story they’re showing, instead of trying to catch up with the way this country is. There are a lot of people getting off the planes and boats every day, and becoming part of this country, whether we like it or not. And it’s important to go back to the basic spirit of America — that, in theory, it is a melting pot, and that’s part of what makes it great.”

Clearly, Demme is a filmmaker with a well-developed social conscience. Just as important, though, he also has a healthy sense of humor. Even back in the early ‘70s, when the New York-born, Miami-raised filmmaker was churning out schlock like Caged Heat and Crazy Mama for Roger Corman, Demme brought a touch of populist politics to his work. But that's only because “Corman said you should always make sure you have action, humor, a degree of sex, and a touch of social comment” in a good drive-in movie, Demme said.

Demme used all the elements for his first film released by a major studio: Fighting Mad (1976), a populist revenge saga in which peaceful farmer Peter Fonda waged war against wicked strip miners. Humor? A few laughs. Sex? A degree. Social comment? A touch. Action? Plenty. And pretty violent action at that.

Nothing Demme has done since Fighting Mad has turned quite so bloody. But his films often treat the possibility of violence as a constant undercurrent in the melting pot. And sometimes, the promise is brutally fulfilled. The jarring climax of Something Wild turned off more than a few audiences. And even though the gunplay in Married to the Mob is played for laughs, as counterpoint to the frisky romance between feisty widow Michelle Pfeiffer and G-man Matthew Modine, characters do indeed die.

“I have real complicated feelings about that,” Demme admitted. “I did my high-school years in Miami, Florida. And it was a wide-open kind of place. There was a lot of fighting — and I saw a lot of fights while growing up. And even got stuck in the middle of one or two of them myself. So I have a first-hand understanding of how this stuff really sometimes happens.

“I’m really very much a pacifist. And I hate violence. But I have — well, you can’t use any other word, you have to come back to fascination. It’s a bad word, because it implies appreciation. Which, of course, there isn’t. I wish there were a hard-edged synonym of fascination to describe the way I feel.”

Some critics yearn to find soft-edged, thoroughly appreciating adjectives to describe Jonathan Demme's movies, if only to encourage moviegoers to buy tickets. Unfortunately, despite the awards and rave reviews that have greeted many of his best works, Demme remains more a cult favorite than a mainstream moneymaker. He thought he had a chance at a mass-audience hit with Swing Shift (1984), his admiring view of the women who kept the assembly lines rolling while their men were off fighting World War II. But Goldie Hawn, the film’s star, insisted on changes that, in Demme’s view, sabotaged the film. Whatever the reason, Swing Shift was a fast flop.

After that experience, Demme said, “I don't want to work with any superstar, regardless of how good an actor they are, if they picture themselves as a product with a group of avid consumers out there, waiting to consume the latest manifestation of, say, the Goldie Hawn product. That’s what it boiled down to on Swing Shift: ‘My audience is going to want to see more of me. My audience wants to laugh at me.’”

Still, Demme won't deny his desire to have a full-scale, across-the-boards box-office hit. Married to the Mob, with its idiosyncratic rhythms and oddball exuberance, may not be the sort of film that grosses $100 million. But it should appeal to a wider audience than Demme heretofore has enjoyed. And, better still, it won’t disappoint his loyal fans.

“I've always loved this kind of escapist movie — if it’s a good one — and still do. And I also have a taste for more unusual fare, like Swimming to Cambodia. I’m just happy that, so far, I've been able to do a variety of things. And I hope I can still continue to do that, because it keeps recharging my batteries.”

His wife, painter Joanne Howard, “was pregnant while we were shooting the movie. And I feel like I did my best work that I’ve done on Married to the Mob. And I feel that I channeled my energies better than I ever did before.

“I'm a late-blooming daddy, and I'm loving every minute of it. And I feel like I’m really applying myself. Not in a stronger way, but in a much more effective way. I’m not schmoozing around as much as perhaps I was.”
Posted by Joe Leydon at 4/26/2017 02:22:00 PM

Hello, this weekend is good for me, since this time i am reading this enormous informative article here at my home. Moving to Canada