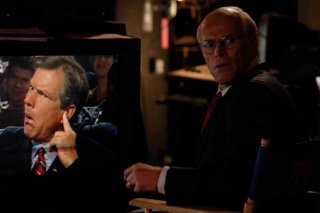 A gaggle of American Idol fianalists dropped by the White House today for a photo op with POTUS. Curiously enough, however, President Bush's handlers refused to allow TV reporters to shoot video of this momentous meeting of the minds. I can't wondering whether the Bushies feared that newscasters might have packaged any such video with film clips from American Dreamz, the comedy that cast Dennis Quaid as a clueless U.S. President who's encouraged to boost his sagging poll numbers by appearing on a popular TV talent show.
Posted by Joe Leydon at 7/28/2006 08:22:00 PM