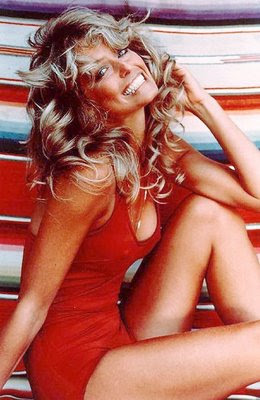 My condolences to the family and friends of Farrah Fawcett, who lost her long battle to cancer today. I know the obits will emphasize her heyday as a ‘70s sex symbol – thanks to the indelible impact of Charlie’s Angels, from which she alighted after only a single full season, and a revealing poster that graced the bedroom walls of hormonally inflamed teen boys everywhere – but I have much fonder memories of her sporadic appearances as the elusive object of David Janssen’s bemused desire in Harry O (1974-76), a cult-fave TV series (and, trust me, I'm a proud member of that cult) that is long overdue for an authorized DVD reissue.

Now probably is not the time to discuss her inability to parlay her initial burst of fame into a sustained film career. In all fairness, it must be acknowledged that when she actually had worthy material with which to work -- The Burning Bed, Extremities -- she acquitted herself respectably. Still, I think it’s safe to say that, for most of her life, she was famous primarily for being famous, and that she didn’t give her greatest, bravest and most affecting performance – as herself – until her sad but inspiring final act.
Posted by Joe Leydon at 6/25/2009 12:32:00 PM