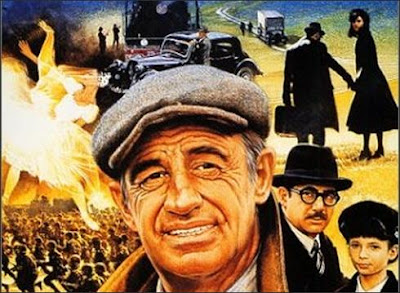 In the wake of the great Jean-Paul Belmondo’s death at age 88, most tributes, I am sure, will emphasize — justly — his iconic performances in Jean-Luc Godard’s French New Wave landmark Breathless (1960), Philippe De Broca’s seriocomic adventure That Man from Rio (1964), Jacques Deray’s stylish gangster drama Borsalino (1960), and several other classics.

But the Belmondo performance I treasure most is the one in my favorite Belmondo movie: Claude Lelouch’s 1995 masterpiece Les Miserables. As I wrote decades ago:

“Claude Lelouch's audacious and exciting epic is neither a film version of the long-running musical nor a traditional adaptation of Victor Hugo’s classic novel. Rather, it is a sweeping and sensationally passionate drama that succeeds brilliantly on its own merits as a celebration of storytelling (and, of course, moviemaking) as inspiration and illumination.

“A magnificently ravaged Jean-Paul Belmondo plays Henri Fortin, an ordinary man whose life spans an extraordinary period in French history: Born at the turn of the century, he lives long enough to endure the cruelties of the Nazi occupation. Rootless and illiterate, he is introduced to Les Miserables at an early age — in a silent movie! — and embraces Jean Valjean as his hero, mentor and alter ego. So much so, in fact, that Henri agrees to help a Jewish family escape from Paris, setting into motion a fateful series of betrayals, reconciliations, reversals of fortune and triumphs of the spirit.

“There are images in Les Miserables that are as hauntingly beautiful as any in the history of cinema. And there are entire sequences that are nothing short of astonishing. Lelouch is one of the few contemporary filmmakers who remains capable of the grand romantic gestures that made many of us fall in love with movies in the first place.”

Unfortunately, the last time I checked, Lelouch’s Les Miserables is not currently available on DVD or Blu-Ray in the United States. (I have a Laserdisc, gifted by a colleague.) Don’t know if this is the result of rights issues, or what. But as another tribute to Jean-Paul Belmondo, maybe someone could rectify that situation?

This film has haunted me and stayed with me

on such a deep level. BELmondo in this film

is extraordinary and the GENTLE GIANT

is beautifully embroidered, I have been

looking for this film since I saw it (i saw

observation.. YOU ARE RIGHT ON.. and

I hope the film is released on DVD.

Must be a copyright issues... Sad day

though.. as I adored this actor...

His voice and his face said so much...

and conveyed humanity on deeper levels

with just his being... no words. just presence..

So rare for today!! This for this post so appreciate,,,