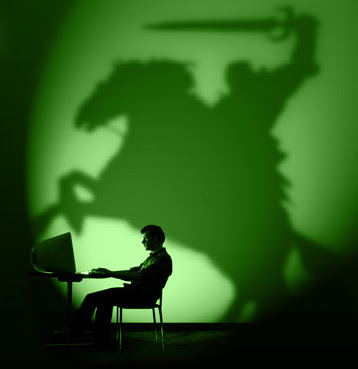 As I wrote in Variety last year: "Is Everquest a harmless distraction or an addictive scourge? Does World of Warcraft forge communities or fray relationships? The answers are as diverse as the interviewees in Second Skin, a sometimes celebratory, sometimes cautionary look at the phenomenon of massively multiplayer online computer games (MMOs). Filmmaker Juan Carlos Pineiro Escoriaza includes cogent observations by scientists, social commentators and game designers, and repeatedly flashes germane factoids (example: The latest edition of Warcraft software posted $96 million in first-day sales). But the human dramas of individual gamers are what really make this technically polished documentary so fascinating..."

The movie "emphasizes the allure for male and female players of assuming the identity of a dashing digital avatar in a virtual online universe of swinging swords and derring-do. Interactive gamers can compete against -- and establish friendships or begin romances with -- unseen strangers hundreds or thousands of miles away. Trouble is, gaming can be extremely habit-forming, leading, in extreme cases, to alienation and depression. Gamer Dan Bustard struggles to recover after losing almost everything while lost in virtual worlds; unfortunately, his is not the worst-case scenario in Second Skin."