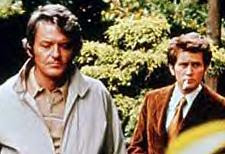 In Variety, Martin Sheen pays respectful tribute to Hal Holbrook: "I had the privilege of playing Hal Holbrook's gay lover in the landmark TV film That Certain Summer. His character was a divorced father with a teenage son, and in one powerful climactic scene, the boy rejects him when he discovers he's gay. Hal sat down and simply wept uncontrollably in the scene, as his son walked away. It was a stunning and deeply moving performance, which he repeated several more times with equal success for the coverage. Afterwards, I told him how moved I was and how impressive it was to watch him reach such emotional depth so quickly and with such ease. He thanked me and casually said, 'The older you get, the easier it is.'

"That was 37 years ago, and that remark was newly remembered as I watched his extraordinary performance in That Evening Sun. Acting is never that easy, no matter how young or old we who do it are. But the older Hal gets, the easier he makes it appear, and that is part of his genius. Like an extension of his character from Into the Wild, Abner, in That Evening Sun, brings Hal front and center and yields an unforgettable, subtle and deeply personal performance. If it gets easier the older he gets, I can't wait to see Hal at age 90."
Neither can I.
Posted by Joe Leydon at 11/29/2009 11:32:00 PM

I saw That Evening Sun at a film festival in Knoxville. It was incredible. If Clint is going to be nominated for an Oscar for Gran Torino, I can't imagine Hal not being nominated - his (Hal's) performance had about 10 times the power and 20 times the nuance of Eastwood's. I mean, I have never seen a performance like this, such emotional depth and truth of the moment. Holbrook is amazing, Academy, listen to me, give this man an Oscar, and let the billion people who watch the Oscars in February find out why after he gets the award. He deserves it. Never seen a performance like that in my life. W O W.