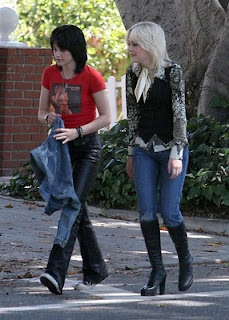 Are you ready for a scorchin’ slice of grrrl power?
Then you’re part of the target audience for the R-rated rambunctiousness of The Runaways, writer-director Floria Sigismondi’s careening and compelling biopic about the mid-1970s all-girl band

that smashed through the glass ceiling designed to dissuade young ladies from rocking like the bad boys.

— the swaggeringly ambisexual singer-guitarist who continues to perform as an indefatigable hard-rocker — and Cherie Currie — the group’s lead singer who left the music industry years ago, and has more recently made her mark as (no kidding) a chainsaw sculptor -- are the featured players.

But even if it’s not the whole story, The Runaways — based in part on a memoir by Currie

, and executive produced by Jett — commands attention and stokes emotions. For that, much of the credit must go to its above-the-title lead performers: Twilight star Kristen Stewart, who makes all the right moves as Joan, and all-grown-up Dakota Fanning, who rocks the house and breaks your heart as Cherie.

While promoting The Runaways — which opens today in Houston — Stewart and Fanning slowed down long enough to answer a few questions about indie moviemaking and rock ’n’ roll role-playing. You can read what they had to say here.
Posted by Joe Leydon at 4/09/2010 01:45:00 PM