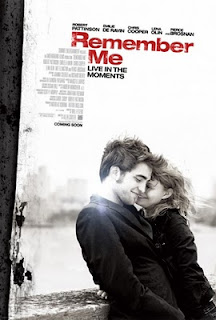 For quite a few reasons, I was pleasantly surprised -- and deeply affected -- by Remember Me, a drama starring Twilight

heartthrob Robert Pattinson that I got around to seeing only yesterday, even though it opened weeks ago at theaters and drive-ins everywhere. Perhaps the biggest surprise -- for me, anyway -- was that I was surprised: Somehow, in an era when spoilers can be stumbled upon in any number of movie blogs and websites, I had managed to miss reading anything that gave me any idea about how the movie ended. The plot deals with an emotionally wounded son (Pattinson) of an aloof Wall Street lawyer (Pierce Brosnan), and his potentially redemptive relationship with a lovely classmate (Emilie de Ravin) who has endured a devastating tragedy. And really, that's all you should know about the film before you see it.

Indeed, anyone teaching college courses in film criticism would do well to consider this class assignment: See Remember Me, then write a review -- favorable or otherwise -- that spills as few beans as possible. If students want to learn by example: Roger Ebert played very fair in his mixed review, duly noting his reservations about the surprise twist at the end while cleverly refraining from revealing much about what got twisted. But if you're of the opinion that any warning about a surprise twist is in and of itself a major spoiler, you might prefer the approach of USA Today critic Claudia Puig, who audcaiously decided to give her readers no hint of what might lie in store for them.

Of course, it's possible to know that a surprise awaits you, and still wind up pretty seriously gobsmacked. I remember seing The Crying Game

fairly early in its theatrical run -- but not quite early enough not to know that, at some point in the film, I would flabbergasted by an unexpected plot develpment. So when a key character was killed off, I found myself thinking: "Wow! Didn't see that coming! That was a surprise twist!"  Which, of course, set me up to be really shocked a few scenes later when the rug and the floor got yanked from beneath my feet.
Posted by Joe Leydon at 4/04/2010 05:17:00 PM