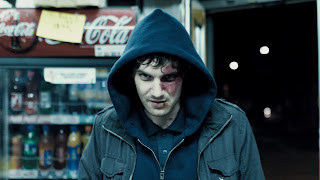 While most folks aound these parts obsess over Sunday’s Texans-Cowboys football matchup, my weekend plans call for a road trip to Austin and a total immersion in Fantastic Fest, the bountifully stocked cinematic smorgasbord that immodestly but accurately bills itself as “the largest genre film festival in the U.S., specializing in horror, fantasy, sci-fi, action and just plain fantastic movies from all around the world.”

The 2010 edition of what Variety has dubbed “the geek Telluride” actually kicked off Thursday night with red carpet premieres (complete with stars and filmmaker in attendance) of Matt Reeves’ Let Me In, the Americanized remake of Tomas Alfredsen’s Swedish vampire drama Let the Right One In

, and Rodrigo Cortés’ Buried, an acclaimed claustrophobic thriller starring Ryan Reynolds as a kidnapped businessman who’s been, well, buried alive. And Friday night’s main attraction is the regional premiere of Stone, with director John Curran and star Edward Norton on hand at downtown Austin’s Paramount Theatre to introduce their twisty neo-noir drama about a hardened convict (Norton), his sexy girlfriend (Milla Jovovich) – and a cynical prison counselor (Robert De Niro) they may or may not manage to manipulate.

But even though I won’t be able to make the scene until Saturday, I know there’s still plenty more promising stuff on tap. I’m especially eager to see Heartless, Philip Ridley’s dark fantasy (shown above) about a disfigured photographer (Jim Sturgess of 21

and Across the Universe

) with a personal grudge against demons who haunt the streets of his bleak neighborhood; The Dead, an enthusiastically hyped, British-produced zombie thriller from sibling filmmakers Howard and Jonathan Ford that, evidently, has nothing whatsoever to do with the classic James Joyce novella of the same title; and – yes, I’m not ashamed to admit it! – Hatchet 2, writer-director Adam Green’s eagerly awaited sequel to his gleefully retro 2007 slasher horror flick about a deformed bogeyman who haunts the swamps near my hometown of New Orleans.

As it turns out, however, the hottest ticket at Fantastic Fest 2010 may be an off-screen attraction. And no, I’m not talking about the festival-sponsored gatherings at various firing ranges where festivalgoers can shoot everything from pistols to shotguns to AK-47’s. (Though I have to admit – all of that sounds pretty dang fantastic to me.)

Late Sunday at the South Austin Boxing Gym – so late, in fact, that it’ll really be Monday when things get started – Alamo Daft House founder and Fantastic Fest director Tim League will join actress Michelle Rodriguez in a “Fantastic Debate” over the issue of whether Avatar

During the first part of the program, they will engage in a relatively calm and reasoned exchange of ideas. And then they’ll step into the ring, and slug it out.

– is a professionally trained boxer. It should also be noted that League is not.

When I caught up with League a couple days ago, he was on his way to the South Austin Boxing Gym for his last training session. He didn’t sound much like a man who expected to score a stunning upset. He did sound like he expected to be, ahem, stunned.

“I have already watched Girlfight,” League said, “and I am genuinely terrified, since I’m going to be insulting her movie in the debate.” He cautioned that members of the ringside audience – particularly those in the journalism profession – might want to keep their own critical comments to themselves: “I've also been watching You Tube clips where she has shown that she can fly off the handle and get pissed with reporters who insult her.”

Joe ... If you were any kind of a man, YOU should offer to step into the ring in League's place ... critic vs. star ... Now THAT would really be interesting to watch ...

Obviously, Tim is a better man than I. He does not fear the stigma of having his ass kicked by a girl.

De Niro gives his best perf in 15 years in Stone ... did you meet up with Roger Corman?
- berg