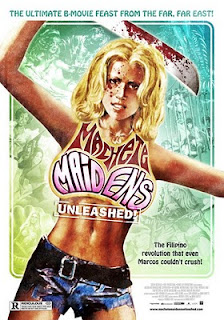 From Mark Hartley, the Melbourne maverick who unleashed Not Quite Hollywood, the explosive expose of B-movies from Down Under, we now have Machete Maidens Unleashed! – the inside story of babes behind bars, blaxploitation bloodletting, kung-fu ass-kicking, and mutant monsters making mayhem in the wild, wild East. Hartley, an Aussie doumentarian with an avid appreciation for disreputable genre movies, will again please connoisseurs of sleazy cinema with his latest effort, a richly bemused and slickly produced overview of lurid schlock inexpensively shot in The Philippines between the 1960s and ‘80s.

As the title indicates, Machete Maidens -- which has its world premiere last week at the Toronto Film Festival, and screens this week at Fantastic Fest in Austin -- devotes a huge amount of running time to those memorbaly lurid '70s action-adventures (many of them produced by schlockmeister Roger Corman) involving scantily clad (or entirely unclothed) women in prison. A few vets of these robustly campy exploitation flicks insist  Black Mama, White Mama

(co-written by, no kidding, a young Jonathan Demme), The Big Bird Cage

and similar fare had at least a smidgen of socially redeeming merit, in that they empowered women as action heroes, and often involved revolutionary movements against oppressive dictatorships. (Ironically, the pronounced left-wing lean of these B-movies never was acknowledged, much less censored, by Philippine government officials -- even after President Ferdinand Marcos declared martial law in The Philippines in 1972.) But filmmaker John Landis, who serves as a hectoring commentator throughout the documentary, sarcastically rejects such readings. When apologists read deeper meaning into the likes of  The Hot Box

, Landis cracks, “I say, ‘What are they smoking?’” And director Joe Dante, who got his start making trailers for Corman movies of this era, breezily dismisses them as formulaic guilty pleasures, impure and simple. His mock sales pitch: “If you like the title Women in Cages

, you’re going to like this movie. Because what’s it got? Women in cages!”

Who is that in the poster? She looks hot!