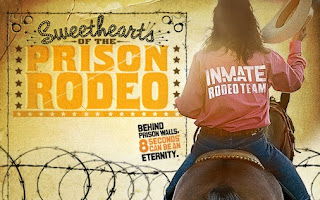 , an up-close view of small-town sportsmen, and examining alt-rock icons in The Fearless Freaks

, his celebration of Wayne Coyne and The Flaming Lips, Oklahoma-based filmmaker Bradley Beesley shifted his gaze to an event billed as "the only behind-the-walls rodeo in the world" in Sweethearts of the Prison Rodeo, a critically acclaimed documentary that will have its Houston theatrical premiere at 7:30 pm Wednesday at the Alamo Drafthouse Cinema in the West Oaks Mall.

Beesely will be on hand for a Q&A after the Wednesday screening – the first-ever CultureMap Night at the Movies presentation -- and I’ll be there to host the event.

At once clear-eyed and compassionate, Sweethearts is a fascinating group portrait of women convicts who are relative newcomers -- but determined competitors -- in a decades-old statewide event previously restricted to male inmates in the Oklahoma prison system. Beesley includes several scenes highlighting a male prison rodeo vet -- a convicted murder who makes no excuses for himself even as he seeks parole – but his movie focuses primarily on the feisty female competitors held in the Eddie Warrior Women's Correctional Center in Taft, OK.

“To be honest,” Beesley told me when I interviewed him at the 2009 SXSW Film Festival in Austin for Cowboys & Indians magazine, “ I never dreamed I would ever make a prison film or a rodeo film. Most prison documentaries bore me to tears. And rodeo documentaries have already been done, you know? But once my producer James Payne and I realized that women would be included in the mix — we figured that would be novel enough for us to show up with our cameras. Which we did — unannounced, basically. That was back in 2006, when they first announced that women were going to participate in this event.”

So he and Payne just showed up one day at the front door of the correctional center?

“Well, we did call the day before we arrived,” Beesley said “But we didn't know who we were going to meet, or whether they were going to let us film. But they let us shoot, and we produced a short — which we premiered [at the SXSW Film Festival] in 2007. And we got some really positive feedback based on the short, which we used to attract funding for a feature-length documentary.”

Like most filmmakers who make films like this one, Beesley and Payne had to rely on educated guesses and gut instincts while “casting” subjects for Sweethearts. “You've got to get lucky,” Beesley said. “ But what we did was, we picked girls who were hopefully going to get out of prison within a year, or two years, because we wanted their stories to have some kind of resolution. And we also picked girls who, for lack of a better term, had drama in their back stories. But even then you don't know what's going to happen.

“Like, we didn't know one of them would get kicked off the rodeo team for receiving contraband. And at first, we were devastated. Here's one of our main ‘characters’ — Jamie Brooks, who did very well the first year women could compete — and she gets kicked off the team, and we're freaking out.

“But after a couple of days, we realized that, for better or worse, it's sort of the best thing that could have happened — for us — because it gave us a bigger arc for her character. For a while it looked like that was going to mess up her parole, after 13 years in prison. But Jamie made parole — and even appeared in Austin for the premiere screening.”

Beesley found himself hoping for the best for all his subjects while filming Sweethearts of the Prison Rodeo. And, yes, that sometimes made it difficult for him to be a completely objective observer.

“Look, I'll admit: Whenever I was down there in a chute with one of these women on a bull, I was shaking. I mean, I wasn't doing a very good job shooting at all. In fact, I'd forget I was shooting because I'd get so wrapped up in watching these ladies that we'd come to care about mounting a bull.

“It was really hard to film.”