Coming (back) soon to a theater near you: Titanic 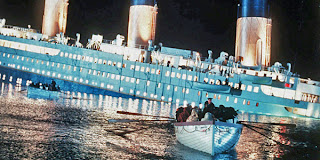 will be converted into 3-D format and reissued in theaters on April 6, 2012 -- just in time for the 100th anniversary of the luxury liner's first and last voyage -- strikes me as, at best, a mixed blessing.

To be brutally honest, I've never been a big fan of Cameron's romantic melodrama -- which, up until the 2009 release of another Cameron extravaganza, Avatar

, ranked as the No. 1 box-office champ of all time -- and my original review most certainly was not a rave. On the other hand, I'll be more than mildly curious to see if and how the re-release will increase the amount of on-line traffic for my interviews with Cameron and Leonardo Di Caprio, which were videotaped shortly before Titanic opened at theaters and drive-ins everywhere back in 1997, and have been available on YouTube since 2008.