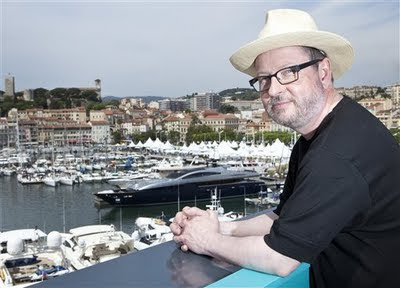 From my file of Things I Wouldn't Dare Make Up: One afternoon at the 1987 Cannes Film Festival, I found myself standing in a mezzanine of the Palais des Festivals, midway between two banks of television monitors. On the monitors to my right, there was an interview with someone -- an actor or a filmmaker, I forget which -- connected with Surf Nazis Must Die

, an exploitation film evidently screening in the festival market. "Well, yes," the fellow said with a smug grin to an unseen interviewer, "I guess I've always thought of myself as something of a Nazi. Hah, hah, hah!"

On the monitors to my left, there was a French newscast report: Klaus Barbie, the Butcher of Lyon, was being led to his trial for crimes against humanity.

The juxtaposition was so jolting that I instinctively glanced around, hoping to find someone, anyone, that I knew among the critics and journalists milling about, so I could grab him or her and ask: "Did you see that? Can you believe that?" But, alas, I was all alone in the crowd, and no one else, not even a passing stranger, appeared to be paying much heed to the TV screens.

And, truth to tell, I actually found myself getting angry. Indeed, I was still angry when I later wrote in my 1989 Houston Post review Marcel Ophuls' Hotel Terminus: The Life and Times of Klaus Barbie

: "After four decades of paperback potboilers, B-movie melodramas, and revisionist historians who would deny the Holocaust ever happened, the very word 'Nazi' has lost much of its sting. Indeed, as I was vividly reminded one afternoon two years ago, some self-satisfied cretin can joke about being a Nazi, on television in a country once brutalized under the German Occupation, and safely assume people will giggle at his naughtiness."

All of which explains why I'm so fascinated -- and, I'm not the least bit ashamed to admit, so heartened -- by what happened today to filmmaker Lars von Trier at this year's Cannes Film Festival. Looks like folks weren't giggling this time.

For the benefit of those who tuned in late: