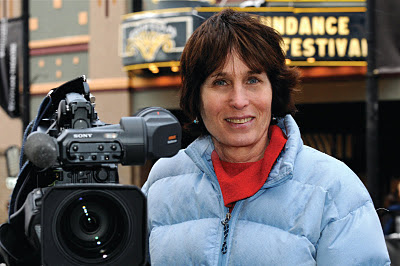 So here's the pitch: Jessie Little Doe, a Native American social worker, starts to have recurring dreams in which vaguely familiar people from another era talk to her in an incomprehensible language. Jessie -- a feisty and inquisitive thirtysomething -- is befuddled and annoyed: Why can't these folks just speak English? Only gradually does she realize that they're speaking Wampanoag, the ancient language of her tribal ancestors. A language no one had used for more than a century.

These and other events send Jessie and members of the Aquinnah and Mashpee Wampanaog communities on an odyssey to uncover hundreds of documents written in their language. Which in turn leads her to pursue a master's degree in Linguistics at MIT and, more important, accomplish something no one has ever  done before – bring a language alive again in an American Indian community many generations after its last Native speakers had passed away. Jessie's now six-year-old daughter, Mae Alice, is the first Native speaker of Wampanaog since a time before movies talked and radios broadcast.

It may sound like the stuff of uplifting fiction, but it's actually the true-life tale compellingly told by award-winning filmmaker Anne Makepeace (pictured above) in We Still Live Here. The acclaimed documentary, a presentation of Public Television's Independent Lens series, will have a free screening at 7 pm Wednesday at the Rice Media Center as part of the ongoing Community Cinema project.

"I was profoundly moved by this story," Makepeace told PBS NewsHour, "and by Jessie herself, who never ceased to amaze me with her earthy humor, her loyal friendship, and her fierce dedication to the work of reviving the language."

Even so, Makepeace feared she would face resistance if she tried to make a movie about that revival: "Jessie and other members of the Wampanoag Language Reclamation Project had a strict policy of never allowing their language to be used in anything that could be sold. They had refused many requests by teachers, filmmakers, and writers for translations and use of the language, because they want to nurture the language and keep it to themselves, at least until they reach a critical mass of fluent speakers."

And there was another complication: Makepeace's own family history.

"My ancestors were Puritans who came to the Massachusetts Bay Colony in 1630," Makepeace said, "and over the decades and centuries [they] proceeded to co-opt Wampanoag lands" in present-day Massachusetts and Rhode Island. "Distant Makepeace relatives own Ocean Spray, and have thousands of acres of cranberry bogs in what was once Wampanoag territory. One of my direct ancestors took part in the Great Swamp Massacre during King Philip's War, a devastating conflagration that decimated Native people in New England in 1676."

Near the of 2007, however, Makepeace mustered the courage to approach Jessie and her associate, Linda Coombs. "I told them that I would love to make a film about the resurrection of their language, that their story had grabbed me by the heart and wouldn't let go. I said that I didn't know how I would do it but that I felt it was an incredibly important story, that it had reached a place very deep in me and that I would be honored to tell it. And then I told them of my family history, even though I feared that this would put an end to the idea right then and there.

"Instead, they listened carefully, and when I was done, one of them simply said, 'You're closing the circle.'"

Now that We Still Live Here is complete and in circulation -- the film is getting public screenings in many other venues nationwide, and is available on DVD -- Makepeace hopes it will inspire the efforts of other indiginous people.

"It is a story of Native Americans taking charge of their history and their identities," the filmmaker says, "reaching back to the words of their ancestors and forward to their children's futures. My hope is that Native Americans and indigenous people around the world whose languages and cultures are endangered will take heart and renew their efforts to revive and revitalize their Native tongues, so that this country and this world retains its rich and infinitely varied cultural diversity.

"I would also like every American to see this film and acquire a deeper understanding and a greater awareness of the Indian people they celebrate at Thanksgiving every year, and of the unique and diverse histories and cultures of Native American communities living in our midst."

Here's a trailer for We Still Live Here.