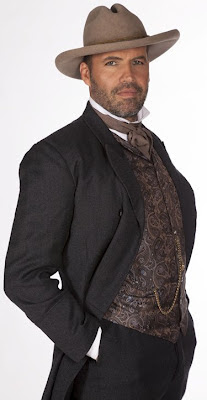 Billy Zane has played his fair share of villainous roles -- more than his fair share, actually, even though he was a pretty dang nifty Phantom -- but he insists that the pistol-waving, jealously inflamed dandy he memorably portrayed in Titanic really wasn't such a bad guy after all.

"Look," he told me a few weeks ago, sounding extraordinary comprehensible for someone whose tongue was firmly implanted in his cheek, "he had every right to be upset. I mean, his girlfriend cheated on him with this other guy. So of course he wanted to shoot him."

Even while the great ship already was taking on water?

"Well, yeah. And, see, that wasn't his fault. So you can't say he was the villain here. It wasn't like he was the iceberg -- that's what killed those thousands of people."

On the other hand: Zane co-stars in Hannah's Law, a well-done made-for-cable Western airing at 7 pm CT Saturday (June 9) on the Hallmark Movie Channel. And yes, he's pretty dastardly in this one. You can read by Cowboys & Indians Magazine interview with Zane here.