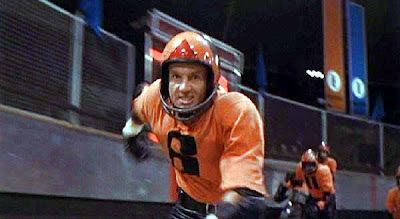 During an on-stage Q&A with me at the 2007 Starz Denver Film Festival, director Norman Jewison recalled the time he was approached by a producer who wanted to turn Jewison's 1975 film Rollerball into a weekly game show ala American Gladiators.

"And so I made Rollerball, this kind of violent, strange kind of film about the future. And it was about a world where all political systems had failed and we were in the hands of corporate entities, the corporations controlled the world. In Europe, it became a kind of a cult film, very political film, and one of my most popular films. But in America, everybody was talking about the game. And some nut called me up and said, ‘Can I get the franchise for Rollerball because I think it would be a great, great game?’

"I couldn’t believe it. And I said, ‘You schmuck. It’s about the insanity of violence!'"

All of which leads me to wonder: Is that same producer watching coverage of the Tour de France today, and thinking: "Hey, maybe that would be a great weekly series?"
Posted by Joe Leydon at 7/07/2012 11:06:00 AM