Take Back the Knight (and Be Not Afraid) 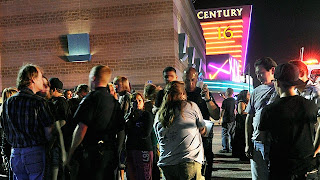 Andrew Breznican of Entertainment Weekly is absolutely right: We should not let the Colorado shooter scare us. We should defy this terrorist’s attempt to intimidate us by doing the very thing that will minimalize any collateral damage he might cause. And we should take Breznican’s words to heart:  “[I]f you want to defy the theater-shooter and the terror he has created — go out this weekend to see a film and enjoy being with your fellow moviegoers.”

But, really, why wait that long?

I propose that we designate this Thursday, July 26, as the night we collectively rally against the madman who murdered so many and tried, even if only as a secondary aim (after ensuring his own notoriety), to permanently despoil the communal pleasure of moviegoing. I propose we call this group endeavor Take Back the Knight – but hasten to add that if you’re not a Batman fan, or you’ve already seen The Dark Knight Rises, or you just don’t yet feel ready to see that particular movie at this particular time, then see something else.

Any movie, of any sort. At any theater, be it an IMAX auditorium or second-run house. Hell, go to a drive-in if there’s one operating within driving distance of your home.

Want to go see a politically-themed documentary that criticizes President Obama? Go. Want to go see a summer blockbuster, or a box-office under-achiever? Go. Want to savor one of the year’s best documentaries – if you’re lucky enough to be living in a city where it’s screening? Go.
Just get out of your house, get in your car, ride your bike or board your preferred means of public transportation. And go.

You see, the SOB who slaughtered the innocents in the Aurora megaplex obviously wants us to think of him and shudder – and, of course, reflexively recall his name -- every time we’re in a movie theater, at any point for the rest of our lives.

Well, to hell with him. Literally.

Ironically, I have first-hand knowledge of something like that paranoia. Back in 1961, while I was growing up in New Orleans, the ceiling collapsed at the second-run moviehouse in my Ninth Ward neighborhood, the aptly named NOLA Theatre. One person died during the disaster, dozens were injured – and the incident quickly attained the status of local legend. (Trust me: If you’re a New Orleans-born movie fan of a certain age, you instinctively wince whenever you hear any reference to “the NOLA cave-in.”) After extensive repairs, the NOLA re-opened, and remained in operation for more years than you might think. But I won’t lie: Every time I saw a movie there after the disaster, I spent almost as much time looking at the ceiling – steeling myself for the worst – as I did watching the screen.

And not just because, on the night of the cave-in, my mom, my kid brother and I actually had planned to go to the NOLA -- but changed our plans when we saw Snow White and the Three Stooges had been replaced as the featured attraction by William Castle’s Homicidal.

But here’s the thing: I was an absolute wuss while I was growing up. Really. I got so freaked out by The Spider that when a humongous arachnid popped up in Have Rocket, Will Travel – yeah, another Three Stooges movie; are you detecting a pattern in my misspent youth? – my mom had to physically restrain me from running out of the theater.

And yet, wuss that I was, I mustered up the courage to go back to the NOLA within days of its re-opening.

So, come on: You know you’re more courageous than I was as a wuss back in the day, right?

I’m fully aware, of course, that some people might read this and blast me for being so churlish as to think about moviegoing at a time when we should be mourning the murdered. And, to be sure, I can sympathize with, if not share, that point of view. But consider this: During his achingly poignant and deeply heartfelt tribute to the fallen Sunday evening in Aurora, Pastor Robin Holland of the community’s Living Hope Baptist Church had this to say at a nationally telecast memorial service:

“Dear Lord, we need to comfort one another… Because the truth of the matter, Lord, is, our city is hurting. But one day, Lord, we know that our city will march back into that theater. And we’ll claim that theater back, Father God. Because it doesn’t belong to terrorists. It belongs to the city of Aurora.”

So do the right thing: Remember the names of the victims, do not cower when you think of their killer. And do not let that detestable wretch keep you from going out to a theater or drive-in near you Thursday evening. Twitter the message with #TakeBackTheKnight – or whichever other way you choose. But however you choose, spread the word.

Not THE Tim Robbins said...