Bob Hoskins actually was quite effective in Super Mario Bros. But the movie itself, well... 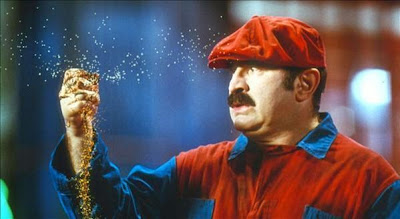 Even some of the most respectful obits for the late, great Bob Hoskins -- who passed away Tuesday at age 71 -- contain snarky remarks about Super Mario Bros., which Hoskins himself once described as "the worst thing I ever did." So I felt compelled to dig up my original  May 29, 1993 review of the infamous box-office bust, since I honestly didn't remember it as being that bad.  And sure enough, I didn't write what I would describe as a scorched-earth pan. But... well, it wasn't a full-throated roar of approval, either.


If you loved them them on Nintendo systems and in video arcades, you may like Super Mario Bros. on the big screen. Indeed, the best audience for this chaotic and cacophonous whirligig of a movie would be video-game aces who don't need such cinematic niceties as plot and character development to have a good time.

But for those who prefer more conventional forms of entertainment, and especially for those who are baffled by any video game more complicated than Pac-Man, Super Mario Bros. may be more problematic.

The movie, which opened Friday without benefit of press previews, is aggressively dazzling with its lavish sets and computer-generated effects. And the casting of the title characters -- Mario and Luigi Mario, those dimension-hopping plumbers from the wilds of Brooklyn -- is dead-solid perfect. With the pugnacious Bob Hoskins as Mario, a blunt-spoken pragmatist, and the soulful John Leguizamo as Luigi, a dreamy-eyed innocent, the filmmakers have actors who are strong enough to be persuasive as straight-faced heroes, and engaging enough to keep from being upstaged by the neon-lit scenery.

As a whole, however, Super Mario Bros. has the feel of something that has been cobbled together with equal measures of inspiration and desperation. The movie appears at once expensive and slapdash, indicating that co-directors Rocky Morton and Annabel Jankel (creators of Max Headroom) didn't have a clear idea what they wanted to do before shooting began. Worse, it looks like they had second thoughts during filming, and third thoughts during the editing process, without ever finding a way to discipline their clever ideas with a coherent narrative. As a result, Super Mario Bros. doesn't tell a story so much as present a series of loosely linked episodes -- some quite funny, others mildly exciting, still others totally lost in the ozone. Sort of like a video game.

The screenplay by Parker Bennett, Terry Runte and Ed Solomon is a ''prequel'' to the video game, showing how Mario and Luigi evolved from hard-working plumbers to Nintendo-ready warriors. They follow a kidnapped paleontologist (Samantha Mathis) through a transdimensional portal, and wind up in a parallel world where man evolved from dinosaurs, not apes. The ruler of the reptiles is King Koopa (Dennis Hopper), a wavy-haired wacko who knows the paleontologist really is a princess, and her medallion really is a key that can merge the parallel worlds. Or something like that.

The Koopa kingdom is an amusingly tacky version of the futuristic urban wasteland of Blade Runner. Chief among its inhabitants are Goombas, half-breeds with the faces of reptiles, the bodies of Cossacks -- and, thanks to Luigi's instructions, the grace of ballroom dancers. Hopper rants and raves as Koopa, but even he can't upstage waltzing dinosaurs. As Lena, his partner in wickedness, the bosomy Fiona Shaw spends most of the movie with a naughty smile on her face. Clearly, she knows what boys like once they outgrow video games.
Posted by Joe Leydon at 4/30/2014 12:54:00 PM

Many children like this game, and they play it all the day. This activity is not good for them because through this, they will harm their studies and face many issues. Coursework writing services.