Coming to CNN, DVD and VOD: Glen Campbell: I'll Be Me 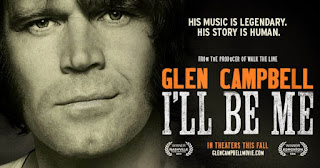 Many celebrities – maybe most celebrities -- would reflexively draw away from the public eye, to avoid public scrutiny and personal embarrassment, after being diagnosed with Alzheimer’s disease. Not Glen Campbell.

In June 2011, two months after his 75th birthday, Campbell revealed to the world that he had the terrible and terrifying disease that gradually, relentlessly, decimates the memory. At the same time, however, the enduringly popular country-pop star announced plans for a series of farewell concerts. Later that fall, Campbell began what was originally scheduled to be a five-week tour – a tour that eventually extended to 151 shows over 15 months.

Kim Campbell, the singer’s wife, accompanied her husband on the tour, and three of his children – Ashley, Shannon and Cal – performed in his backup band. Some performances went surprisingly smoothly. Others didn’t. “It was almost like a game of roulette,” Ashley Campbell told the New York Times in a 2014 interview. “You’d have a great show and then a difficult show, and you’d start to wonder, ‘Oh no, is this getting towards the end?’ ”

The same question occasionally occurred to director James Keach and producer Trevor Albert as they followed Campbell on and off stage during the filming of Glen Campbell: I’ll Be Me, their critically acclaimed behind-the-scenes documentary that is by turns heartbreaking and spirit-lifting as it charts the decline and defiance of an artist struggling to transcend his affliction while continuing to do what he does best and loves most.

The film -- which had its world premiere at the 2014 Nashville Film Festival, and features admiring commentaries by Paul McCarthy, Brad Paisley, Steve Martin, Blake Shelton, Bill Clinton and other notables -- will be shown at 9 pm ET Sunday, June 28, on CNN. It will be available on digital platforms starting Aug. 18, followed by a DVD and VOD release on Sept. 1.

Keach says Campbell impressed him as “a real-life hero” during the lengthy production of I’ll Be Me, which he views as not only a tribute to “one of the greatest musicians this country has ever known,” but also a group portrait of a family bravely united in a common cause. The film does not stint on showing Campbell traversing wild mood swings while raging against his incurable disease, or struggling to recall song lyrics, and recognize once-familiar friends and surroundings. Time and again, however, I’ll Be Me also emphasizes the ties that bind, the music that delights, and the spirit that endures. “The making of this film has been an exhilarating, joyous and inspiring ride,” says Albert. “I attribute that entirely to the heroic spirit of Glen Campbell and his extraordinary family.”

Following the Nashville Film Festival premiere of Glen Campbell: I’ll Be Me, I had the privilege of hosting a post-screening Q&A with Keach and Albert. You can read some excerpts from our conversation, edited for length and clarity, here. 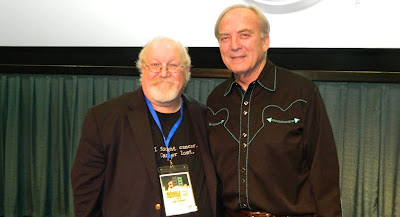