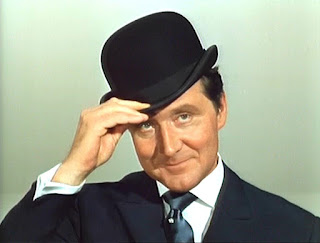 As a tribute to Patrick Macnee, the dapper Brit actor and original Avenger who passed away Thursday at age 93, I wanted to share some snippets from a luncheon interview I did with the gentleman back in 1987, when he passed through Houston to promote a movie titled Shadey. The film, I must admit, was instantly forgettable. But the conversation was an unadulterated delight.

During a visit to Toronto a few years ago, Patrick Macnee ran into an old friend, Peter O'Toole, in the lobby of his hotel. ''And while we went up in the lift together,'' Macnee recalls, ''he said to me, 'Well, what have you been up to?' And I said, 'I'm doing The New Avengers.'' And he said, 'Oh, Patrick, you're always doing The Avengers. . .' ''

Macnee joined in the hearty laughter of his lunchtime companions when he finished the anecdote during a recent Houston visit. But he's the first to agree there was more truth than jest to O'Toole's comment. Even so, he remains greatly pleased by what other actors might bemoan as typecasting.

''As a matter of fact,'' Macnee said, ''I think they're going to do a new Avengers series. And I shall be the oldest living Avenger. But I don't give a damn -- it's a good pension.''

During his four decades as a professional actor, Macnee has appeared in hundreds of movies, plays and TV productions, playing everything from a psychiatrist who moonlights as a werewolf (The Howling) to a mystery writer who plots to kill his wife's lover (during the original Broadway run of Sleuth). He has been the boss of Napoleon Solo (The Return of the Man from U.N.C.L.E.), a confidant for James Bond (A View to a Kill), and a music mogul who signs a heavy-metal rock band (This is Spinal Tap). In Shadey, an off-beat black comedy he visited Houston to promote, he co-stars as Sir Cyril Landau, a corrupt British industrialist who lusts after his grown daughter (Leslie Ash).

But Macnee remains, now and perhaps forever, best known as John Steed, the suave British superspy who spent almost all of the Swinging '60s as one of The Avengers.

During the show's original run, he was teamed with such attractive partners as Diana Rigg, Honor Blackman and Linda Thorson. For the better part of a decade, though, it was Macnee as Steed who remained the show's constant. (''I had to stay -- I had two little children with ever-open beaks, and I had to send them to college.'') When the series was revived in the mid-1970s as -- what else? -- The New Avengers, Macnee took his brolly and bowler hat out of storage, and once again slipped into the Steed role.

''I think,'' Macnee said, ''I will probably still be playing John Steed shortly after I'm dead… I can come down like Hamlet's father, through a mist and everything.''

Between 1966 and 1969, The Avengers was shown, sporadically, to U.S. viewers on the ABC network. But it wasn't until the series went into syndication in the '70s that it attracted a serious cult following. (CBS briefly aired The New Avengers as a late-night offering in the early '80s.) Today, the original episodes co-starring Macnee and Diana Rigg still are shown in many major TV markets. The Avengers cult continues to thrive, spawning newsletters, magazines and paperbacks.

And, yes, there's a good possibility the original cast will return for one of those ''grand reunion'' TV movies.

The proposed plot, Macnee said, calls for Steed's four former partners to take center stage. ''It's from their point of view,'' he said. ''I've disappeared, and they think I'm dead. So all four of the girls attend my funeral, and open the casket -- and I'm not there.

''It's a bloody good idea, and I'll tell you why. Because Honor Blackman is still beautiful. Di Rigg is gorgeous. Linda Thorson, whom a lot of people despised, is now half-way through a new situation comedy in Hollywood where she's gonna be the new Gracie Allen. She is wonderful. And Joanna Lumley, who was on The New Avengers, is a big star in England now. Can you imagine having those four girls, coming in and sleuthing from a woman's point of view?

''And then I can ponce about a little bit behind a tree or something. As long as they pay me a lot of money, I wouldn't mind.''

Lest he give the wrong impression, Macnee is quick to emphasize that money isn't everything. It's a lot, but not everything.

Besides, he added, ''You don't become an actor to make money. I earn money on commercials. I do all those in-house things for IBM, when they have new things for the computers and all that… I stand about in a bowler hat, and make a fortune.

''I did one with Don Johnson the other day for General Motors, about seatbelts, for kids. They'll show it in all the schools. And we had a lot of fun.

''If you do about five of those a year, it's good. They pay you an enormous amount of money for one day's work. Consequently, I can do work that I like to do.''

Macnee, a wonderfully entertaining raconteur over a long lunch, speaks of acting the way most other people might speak of a part-time business that's little more than a hobby. To hear him talk, he's pulling a grand scam on producers and directors everywhere: He gets to make films and TV-movies with marvelous people, travel all over the world, and have a great time. And he gets paid for it. What a deal!

''I've just been in Rome doing a film, which I adored,'' Macnee said. ''I was playing some poncy old priest, inveighing against AIDS or something, in some galaxy in 2021. And, you know, doing that, you earn more money, and have more fun, in three weeks than you do in four months on Broadway.''

To be sure, Macnee said, being so closely identified with the John Steed character has limited the diversity of roles that come his way. ''But it works two ways, that. Because I can fill a theater -- I've just played six months in the West End, in Dick Levinson and Bill Link's play, Killing Jessica. And you can always fill a theater based on the fact that people know you.

''And by sheer luck, people like Joe Dante, for whom I did a film called The Howling, and Rob Reiner, who directed This is Spinal Tap -- they remember me, because they were little kids when they saw The Avengers. So they cast me as mad scientists and crazy uncles and all that lot. So I really can't complain. I really can't.''

But Macnee can complain -- and be quite vocal about it -- when he must suffer those he considers fools and pretenders. He almost didn't do Shadey because it was directed by Philip Saville -- a long-ago boyfriend of Diana Rigg.

''During all the time she was doing The Avengers,'' Macnee recalled, ''he was frightfully grand… and spent all of his time saying to Diana Rigg, 'You shouldn't be doing this cheap, common series. Somebody who played Cordelia opposite Paul Scofield in King Lear, playing in this thing?' So every day, she used to turn up, terribly bad-tempered. And she left after 18 months, inveighing against all male chauvinism, the producers, the fact that she was paid less than the makeup man…”

So Macnee was less than eager to play Sir Cyril, the millionaire with a daughter fixation, for Saville. In the end, though, Macnee was impressed by Snoo Wilson's script, and signed to make the movie.

''But once we started filming,'' Macnee said, ''Philip came up to me and said, 'It's all improvisation, you know, Patrick -- if you know what I mean.' I said, 'Yes, I do know what you mean. You want me to improvise incest, right?' He said, 'Well, yes.'

''There are so many frauds about, aren't there?''

Macnee, who was born and raised in London, has lived in Palm Springs, Calif. for nearly two decades. (He became a U.S. citizen eight years ago.) He refuses to be coy about his age -- rather, he cheerfully admits he's ‘‘an old-age pensioner who gets Medicare,'' with two grown children.

''But I take care of myself. I walk a lot. And I got very miserable at one time, and got very fat. But now I'm getting thin again, thank God. And I keep reasonably fit. I gave up drinking and smoking -- which for a 65-year-old is a good idea, because then you stand a chance of reaching 75. Unlike most of my compatriots. As much as I loved them, and they're infinitely more talented, they're now resting their little bones underneath the cross.

''I've lived a lot of life, which is rather fun. Career-wise, I suppose I could have done a lot better, really. But you can't think about those sorts of things, I don't think.''

Unfortunately, the Avengers reunion movie Macnee described never made it past the planning stages. Even more unfortunately, Macnee lived long enough to see the disastrous 1998 feature film reboot of The Avengers starring Ralph Fiennes as John Steed and Uma Thurman as Emma Peel. On the other hand, that movie did provide a tidy paycheck for Macnee, who cameoed as an invisible secret agent who was heard but never seen. I have no doubt that, even if he was disappointed by the movie in general and Fiennes’ performance in particular, he kept his criticism to himself – and laughed while sauntering all the way the bank.

''I think,'' Macnee said, ''I will probably still be playing John Steed shortly after I'm dead… I can come down like Hamlet's father, through a mist and everything.''
--Oh, how I wish this were true!!