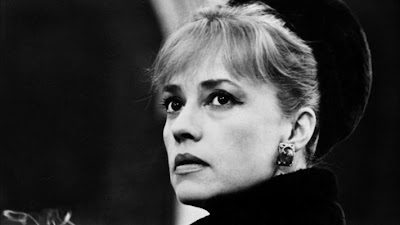 As a tribute to the great Jeanne Moreau, who passed away Monday in Paris at age 89, I offer this profile I wrote on the occasion of her appearance at the 1989 French Film Festival.

Speak her name, Jeanne Moreau, and the film buffs in your circle will recall the movies, the moments, the magic that made her the thinking man’s sex symbol of ‘60s French cinema.

Those lips: full, sensuous, ripe with provocative challenge, curving into a smile that lets you know she sees through all your clever poses. Those eyes: bright, knowing, focusing into a piercing stare that swerves like a gun turret, finds you, grabs you and won't let you go.

She conveys a promise — and a threat. If you're man enough.

And if you're a woman, you can only marvel at how, in an era before feminism was cool, she was always very liberated.

In Louis Malle’s The Lovers (1958), Jeanne Moreau is a bored, provincial housewife who abandons her husband and child for her new lover.

In Francois Truffaut's The Bride Wore Black (1968), she is a relentless avenging angel, systematically seducing and killing the men who accidentally murdered her husband on their wedding day.

And in Truffaut's Jules and Jim (1962) — arguably her greatest, certainly her most famous film — she is Catherine, the enigmatic beauty who demands life and love on her own terms, who rebels against bourgeois convention, who ends a long-running ménage a trois by killing herself and her lover.

During the past four decades, Moreau has made more than 80 films, working with such esteemed directors as Luis Bunuel, Orson Welles, Michelangelo Antonioni, Elia Kazan and Joseph Losey. Now, at age 61, she remains very much in demand, for starring and supporting roles, on the French stage as well as in international screen.

Still, for cineastes of a certain age, she will always be associated, almost to the exclusion of her other credits, with her work for the bold French directors of the nouvelle vague (new wave), film critics who began to create their own cinema in the late 1950s.

It was only appropriate, therefore, that Moreau was honored last month with a lifetime achievement award at the first French Film Festival in Sarasota, Fla. “She, more than any of the others, was the single star of the nouvelle vague,” said critic Molly Haskell, the festival’s artistic director.

To celebrate Moreau's career, the festival presented a newly restored print of Jules and Jim. On the afternoon before the screening, however, Moreau conceded she was reluctant to attend: Truffaut, who died five years ago, was a close friend, and the movie remains one of her favorites. “I'm torn between seeing the film,” she said, “and being ashamed of crying, or being a coward, and not seeing it.”

Jeanne Moreau is not a coward. Even though the movie brought back bittersweet memories — and, indeed, even though her mother passed away a few days before the Florida festival — she attended the screening. And if she had tears to shed, she waited until she was away from the prying eyes of hundreds of admiring moviegoers. For the audience, and for interviewers, Moreau had only smiles.

She almost laughed out loud when reminded that, not so very long ago, she was dubbed “the new Bette Davis” by an awestruck film critic.

“To tell the truth,” Moreau said in her familiar, gravelly purr, “when I began, I was told that I was ‘a new Bette Davis,’ and that got on my nerves. I mean, really.

“But many years later, through a common friend in LA, I was told, ‘Well, Bette Davis would like to know you at last. After all these years, she heard that there’s a new Bette Davis, and it's getting on her nerves.’ So he arranged a lunch that we had, at the Brown Derby, the two of us, and I loved being with her. That was about 15 years ago. And after that, each time she came to Paris, or each time I was in New York or LA and she was free, we would meet. I admire her very, very much. And she's so American, and I'm so French — that was so funny.”

Moreau smiled when I told her of a close friend who has long identified with Catherine, her character in Jules and Jim. She inquired, mischievously: “But she never killed herself with a lover, eh?” Well, no, not really. Not yet, at least. “Well,” she replied. “That's a good thing.”

Actually, Moreau claimed, most people don’t remember the murder-suicide that ends Jules and Jim. “I think the main idea people have [about the film] is, how can a woman manage to be in love with two men? And very funnily, the idea of the last tragedy, the death, is erased in the memory of people. They don’t talk about the suicide, and this crime — that's gone off. And what’s left is that a woman tried to make it with two men.

“Students who have seen the film, young girls and young boys, are interested in that very special relationship.

“But, you know, women of my age, or younger, never approach me concerning
Jules and Jim. When they write to me, or when they speak to me, it’s more in relation to life in general. How do you manage? How did you make it? How is it that you're still there? How is it that you're working and you seem to enjoy it?”

The daughter of a French restaurant manager and his Anglo-Irish wife, Moreau was 15 years old when she saw her first play, Jean Anouilh's Antigone, and immediately informed her parents that she wanted to become an actress. There was something of a theatrical tradition in the family — her mother once danced at the Folies-Bergere. Even so, her father reacted badly to Moreau’s announcement: He slapped her soundly.

Undeterred, Moreau began taking courses at the Conservatoire theater school in Paris. By 20, she was the youngest performing member of the Comedie-Francaise. A few years later, she electrified Parisian theatergoers with her scorching portrayal of Maggie in the first French staging of Cat on a Hot Tin Roof. Movies, inevitably, followed.

In addition to her work with the nouvelle vague crowd, Moreau has starred in several English-language movies — The Victors, The Yellow Rolls-Royce, Monte Walsh, The Great Catherine — and directed two French film dramas, La Lumiere and The Adolescent. She is extremely proud of working in three different films directed by Orson Welles: The Trial, based on the Franz Kafka novel; Falstaff, a drama drawn from Shakespeare’s plays; and a never-completed version of a novel recently filmed, in Australia, as a thriller titled Dead Calm. “Freedom and tyranny,” she said. “Orson could be very good at both.”

During the past decade, Moreau has been more active on French stage, earning rave reviews as a maid looking back at her eventful life in Le Recit de la Servante, and, more recently, as an elderly and overweight matchmaker in a revival of a 15th-century Spanish play, La Celestine. (Next year, she may direct the French stage translation of Steel Magnolias.) After surviving a brief, stormy marriage to American filmmaker William Friedkin (The French Connection), Moreau lives alone in a Paris apartment, where she reads scripts, entertains offers, and looks forward, never backward, to her life and her work.

The movies continue to attract her interest. After Sarasota, she was off to Moscow to star in Anna Karamazoff, directed by political dissident Rustam Khamdamov. “He’s a young man who had been in hiding. Because of the new politics of Gorbachev, he has been allowed to make his film… And they asked me to do the main part, even though I’m French. Because this man, in hiding, has been dreaming about me. About pictures of me in magazines. And he saw some films. And he’s been dreaming about me doing his film. Isn’t that funny?”

When Anna Karamazoff wraps, Moreau will return to France for La Femme Fardee, based on the novel by Francoise Sagan. Next year, she will travel to Australia for a major role in Until the End of the World, a futuristic love story directed by Wim Wenders (Paris, Texas).

So, tell us, Jeanne Moreau: How is it that you’re still working and you seem to enjoy it?

“Maybe because I didn't think of my life in terms of career. Very early, when I became successful with the New Wave, I’d been making films for 10 years. And I felt the danger, instinctively. I didn’t want to be part of the star system, you know, where they say, ‘Oh, you represent so much, and that means you should get such-and-such amount of money.’ That frightened me, really.

“So I moved away. I said no to lots of things. And I lived very freely. I traveled, I fell in love, I did nothing, I read — surrounded by people who were saying, ‘Oh, you’re destroying your career.’ But I didn’t want any career.

“And now, that's my strength. Because I do not belong to any category. I’m out. So that’s total freedom. And because of that, I don't worry. And not worrying, I’ve kept a very childish attitude toward being an actress: I enjoy it, immensely. And I have a great curiosity. And as soon as something crazy comes my way, like that Soviet director who says, ‘I can't pay you, you have to buy your plane ticket, and you have to come over, the only thing I’m sure of is that you’re going to have food and a good bed’ — well, I go. You see?