Nicolas Cage dials it down in Looking Glass 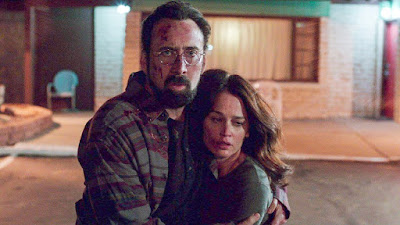 From my 2.17.18 Variety review: "Nicolas Cage continues to pad his resume with VOD-centric B-movies of wildly varying quality, demonstrating, if not discerning taste, then a prodigious work ethic that would have served him well as a Warner Bros. contract player during the 1930s and ’40s. Looking Glass, the latest in his seemingly endless parade of low-rent star vehicles, is notable mostly for showcasing a relatively restrained performance by the often manic actor. During almost the entirely of this derivative melodrama, a slow-burn scenario about strange doings at a second-rate desert motel, Cage tamps down his trademark tendency toward ravenous scenery chewing. He remains admirably disciplined even during scenes in which one of his co-stars is prematurely giving the game away by doing everything short of screaming, 'I’m the mad killer! I’m the mad killer!'" You can read the rest of my review here.
Posted by Joe Leydon at 2/18/2018 07:20:00 AM

I’ve been searching for some decent stuff on the subject and haven't had any luck up until this point, You just got a new biggest fan!.. Cage Heaven rat cage collection