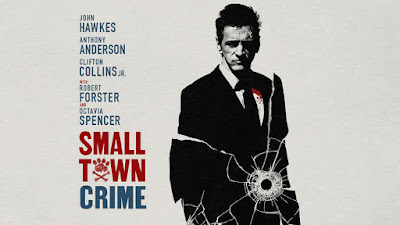 From my 3.21.17 Variety review: “It looks like John Hawkes is carving a niche for himself on the seedier streets of neo-noir. Two years ago, the impressively protean character actor essayed a low-rent shamus who discovers himself — and finds himself wanting — while searching for a missing young woman in Dennis Hauck’s intriguingly time-scrambled Too Late. Now he’s back on the case as another scuffed-up gumshoe in Small Town Crime, a hardboiled melodrama with a heart of tarnished gold. Written and directed by sibling filmmakers Ian and Eshom Nelms with equal measures of respect and skepticism for pulp conventions, the movie comes across as neither pastiche nor parody, but rather as a seriously down-and-dirty crime story with a savage sense of humor. The just-complicated-enough plot could pass for a lesser-known narrative of Elmore Leonard. At the center of it all, Hawkes stands tall — or at least he tries to, even when his character is staggering drunkenly, or passing out altogether.”

Oooh,sounds like a film I want to see! Thanks for the heads-up.