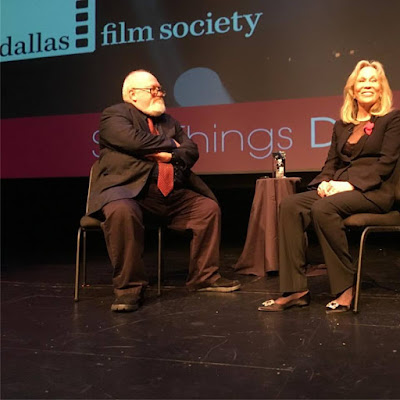 Last year at the Dallas International Film Festival, it was my privilege and honor to host an onstage Q&A with Faye Dunaway before a 50th anniversary screening of Arthur Penn’s Bonnie and Clyde. Keep in mind: This event occurred March 30 — less than five weeks after the embarrassing kerfuffle at the 89th Academy Awards. And to be totally honest, I was a little surprised that Dunaway agreed to appeared in public so soon after she and co-presenter Warren Beatty were targeted with so much ageist-tinged mockery on social media (and elsewhere) in the wake of that infamous mix-up.
And so, when we sat down to sort out our game plan the night before the Q&A, I began the conversation by saying, “OK, just so you’ll know: I don’t think there’s any need to talk about the Oscars.” Dunaway smiled and nodded. And then we proceeded to discuss more important things. Like, you know, her acting career. (She seemed very surprised, and happy, when I told her how much I admired her performance as Maggie, the deeply troubled Marilyn Monroe figure, in a 1974 TV production of Arthur Miller’s After the Fall.)

The Q&A went over extremely well. And I must confess: I got a big laugh, from Dunaway and the audience, when, after she gleefully described playing a “naughty” character in another great Arthur Penn movie, Little Big Man, I responded: “You know, Faye, I’ve always dreamed of hearing you tell me how naughty you are.”
But here’s the thing: When I opened things up so members of the audience could ask questions — no one asked about the Oscars. No one. I guess they, too, didn’t think it would be in good taste to bring up the subject.
Flash forward a year, and I see in Variety that Dunaway and Beatty have been invited to present the Best Picture award again this Sunday at the 90th annual Academy Awards. Good for them — they are great sports. And I’m really, really keeping my fingers crossed…

You are a very classy man. I'll bet she truly appreciated it.

Stream TV shows or even in case you need to hunt for the latest movies.yemoviesonline.org has various tutorials related to yemoviesonline.